"There is nothing in the public record to justify this dismissal," former U.S. attorney Barbara McQuade tells Salon 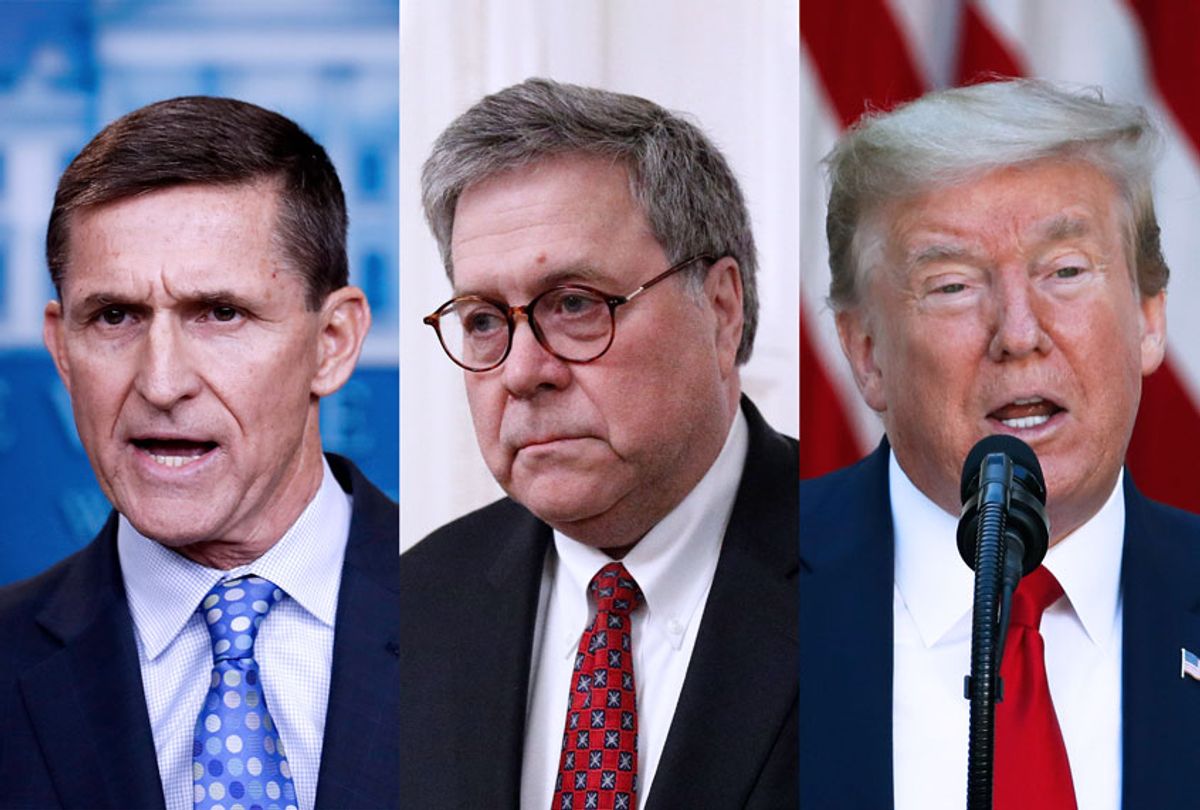 The Department of Justice, under the leadership of Attorney General William Barr, has dropped criminal charges against former Trump national security adviser Michael Flynn, who became a cooperating witness in the Russia probe after former special counsel Robert Mueller flipped him.

The decision reverses a conviction brought into motion by Flynn himself, who in 2017 confessed in a sworn statement filed in the U.S. District Court in Washington that he had lied to the FBI about his contacts with a former Russian ambassador during the presidential transition.

In exchange, Flynn was granted prosecutorial leniency. The agreement seems to have spared Flynn from further investigation after he admitted to lying about his Turkish lobbying, as well as any possible exposure to his son, Michael Flynn Jr.

Mueller later recommended no jail time for Flynn, invoking his "substantial" assistance. Nonetheless, the Justice Department said it was dropping the charges this week "after a considered review of all the facts and circumstances of this case, including newly-discovered and disclosed information," according to documents obtained by the Associated Press.

The decision, which countermands Flynn's sworn guilty plea, follows an internal DOJ review into the case. Flynn's lawyers contended he was not interviewed with a legitimate investigative basis, citing recently-released internal FBI emails and notes to support their allegations of entrapment.

The department wrote in this week's court filing that Flynn's initial FBI interview — which he granted to agents in the White House four days into the administration, voluntarily declining his right to have a lawyer present — was illegitimate, "untethered to, and unjustified by, the FBI's counterintelligence investigation."

"Through the course of my review of General Flynn's case, I concluded the proper and just course was to dismiss the case," Jensen said in a statement to the AP. "I briefed Attorney General Barr on my findings, advised him on these conclusions and he agreed."

Minutes before the retraction was filed, Mueller's lead prosecutor against Flynn told the court that he was withdrawing from the case. No reason was provided.

"It is telling that the career prosecutor, Brandon Van Grack, has withdrawn from the case," former U.S. attorney Barbara McQuade told Salon.

"There is nothing in the public record to justify this dismissal. Flynn lied to the FBI about undermining U.S. foreign policy with Russia," she said. "The internal strategy discussions of the FBI do nothing to negate that fact."

The new court documents also claim that the department cannot prove that Flynn lied beyond a reasonable doubt, even though Flynn's confessed to lying twice in federal court.

"The government is not persuaded that the Jan. 24, 2017 interview was conducted with a legitimate investigative basis and therefore does not believe Mr. Flynn's statements were material even if untrue," the court filing read. "Moreover, we not believe that the government can prove either the relevant false statements or their materiality beyond a reasonable doubt."

On Flynn's 2017 guilty plea, his signature appears under this statement:

The decision is sure to please the president and his allies, who had turned Flynn into a martyr for their cause and a metonym for what they falsely claim was an FBI setup, an unjustified "witch hunt" to bring the president down in a deep state-coup.

Trump has routinely expressed regrets about firing Flynn, whom he believes was treated unfairly. The president justified the firing by saying Flynn had lied to then-Vice President-elect Mike Pence — not to the FBI. But he appeared to admit for the first time in a December 2017 tweet that he knew more, writing:

"I had to fire General Flynn because he lied to the Vice President and the FBI. He has pled guilty to those lies. It is a shame because his actions during the transition were lawful. There was nothing to hide!"

Trump lawyer John Dowd later took the fall for the tweet, which bolstered allegations of obstruction of justice against the president.

Trump has recently tweeted more about Flynn, raising speculation of a pardon. The president accused the FBI of attempting to "intentionally frame" Flynn and blasted the "dirty, filthy cops" who allegedly set his former confidant up.

However, this decision by Barr — whom Democrats have accused of running interference for the president in several instances of alleged wrongdoing — precludes Trump from invoking his pardon power.

Barr, who has questioned the Russia investigation from the beginning, has recently returned to the subject, saying as recently as April that it was predicated "without any basis." And in a remarkable move this February, Barr overruled his own prosecutors' sentencing recommendation against longtime Trump ally Roger Stone. All four federal prosecutors on the Stone case abruptly resigned in protest.

Barr will appear on CBS Evening News on Thursday to defend his decision.

"I want to make sure that we restore confidence in the system. There's only one standard of justice," he said in an excerpt. "And I believe that . . . justice in this case requires dismissing the charges against General Flynn."