Will Trump’s "catastrophic mishandling" of the pandemic cost Susan Collins her Senate seat?

The Republican senator from Maine currently trails Democrat Sara Gideon by 2.5 points in an average of polls 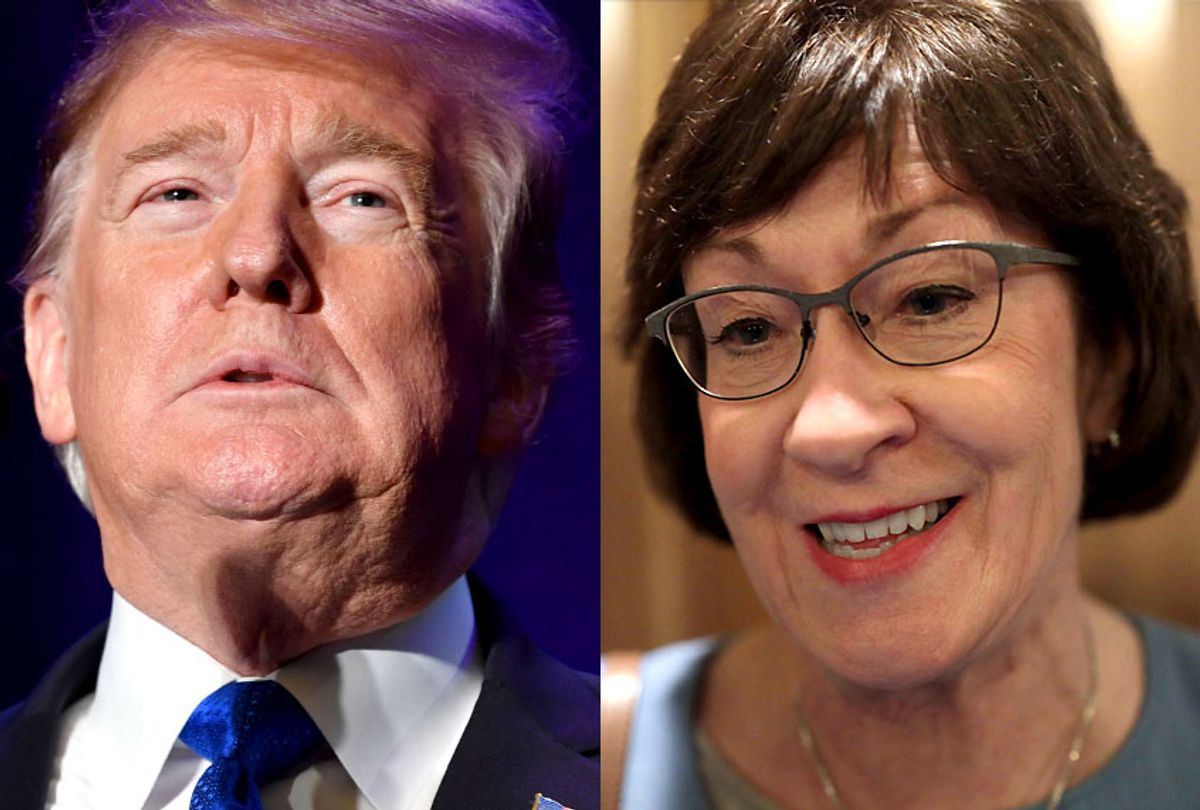 Politically, a lot could happen between now and November. But Democratic strategists, in recent weeks, have been encouraged to see former Vice President Joe Biden, the presumptive Democratic presidential candidate, leading in many polls. Moreover, they are hoping that if Biden performs well in November, there will be a down-ballot effect in key Senate races. Journalist Eric Lutz, this week in an article for Vanity Fair, explores the possibility that Trump's botched response to the coronavirus pandemic will help Democrats regain control of the U.S. Senate.

The fear that Republicans could lose control of the U.S. Senate, Lutz explains in his article, was recently addressed by the National Republican Senatorial Committee (NRSC) in a 57-page memo — which read, "Don't defend Trump. Attack China." Trump's 2020 reelection campaign, including his campaign chairman Brad Parscale, reacted angrily and asserted that the president's coronavirus record should be defended and promoted. And the NRSC apologized, saying that the memo was poorly worded and that the NRSC wasn't dissing the president. Even so, Lutz writes, "The memo seemed to reflect Republican fears that the president's catastrophic mishandling of the COVID crisis could not only cost them the White House, but the Senate as well."

The U.S. Senate, 270towin.com notes, presently has "53 Republicans and 47 Democrats." This means that in order to achieve a majority in the Senate, Democrats will need to flip at least four GOP-help seats while holding onto all of the seats they are presently defending. If Democratic Alabama Sen. Doug Jones, who is considered vulnerable, loses to a Republican in November, Democrats would need to flip five or more GOP-held seats in order to achieve a majority.

Regaining control of the Senate is a heavy lift for Democrats, but as Lutz explains in Vanity Fair, it is certainly doable — and NRSC fears of a possible Democrat-controlled Senate in 2021 are "warranted" when one takes into account the Republican incumbents who are considered vulnerable.

"High-profile Republicans are among those who find themselves in jeopardy," Lutz observes. "Thom Tillis, a Trump ally, is trailing Democratic challenger Cal Cunningham by nine points in North Carolina, according to a poll released Tuesday, and Maine's Susan Collins is behind (Democrat) Sara Gideon 2.5 points in an average of polls."

Lutz goes on to point out that other incumbent GOP senators who are considered vulnerable range from Martha McSally in Arizona to Joni Ernst in Iowa.

"Even before the coronavirus crisis hit, Trump was a historically unpopular president who made not only himself, but his party, vulnerable to defeat — thanks to his corruption, incompetence and despicable behavior," Lutz observes. "But his mishandling of the pandemic has accentuated all those shortcomings, perhaps even eroding some support within his previously rock-solid base."

Lutz wraps up his article by asserting that although it would be a mistake for Democrats to become "overconfident," they have reason for optimism where the U.S. Senate is concerned.

"The upward trends shouldn't make Democrats overconfident about a November sweep — especially given their own vulnerability in certain races, like Doug Jones' fight in Alabama to hold onto the seat he took over in 2018, and the prospect of the GOP deploying dirty tricks this fall," Lutz writes. "But the idea that we're even talking about prominent Republicans like Collins and Tillis being vulnerable should worry Republicans."