Maryland's anti-Trump GOP governor seized a moment in the spotlight: But was his "heroism" just a media scam? 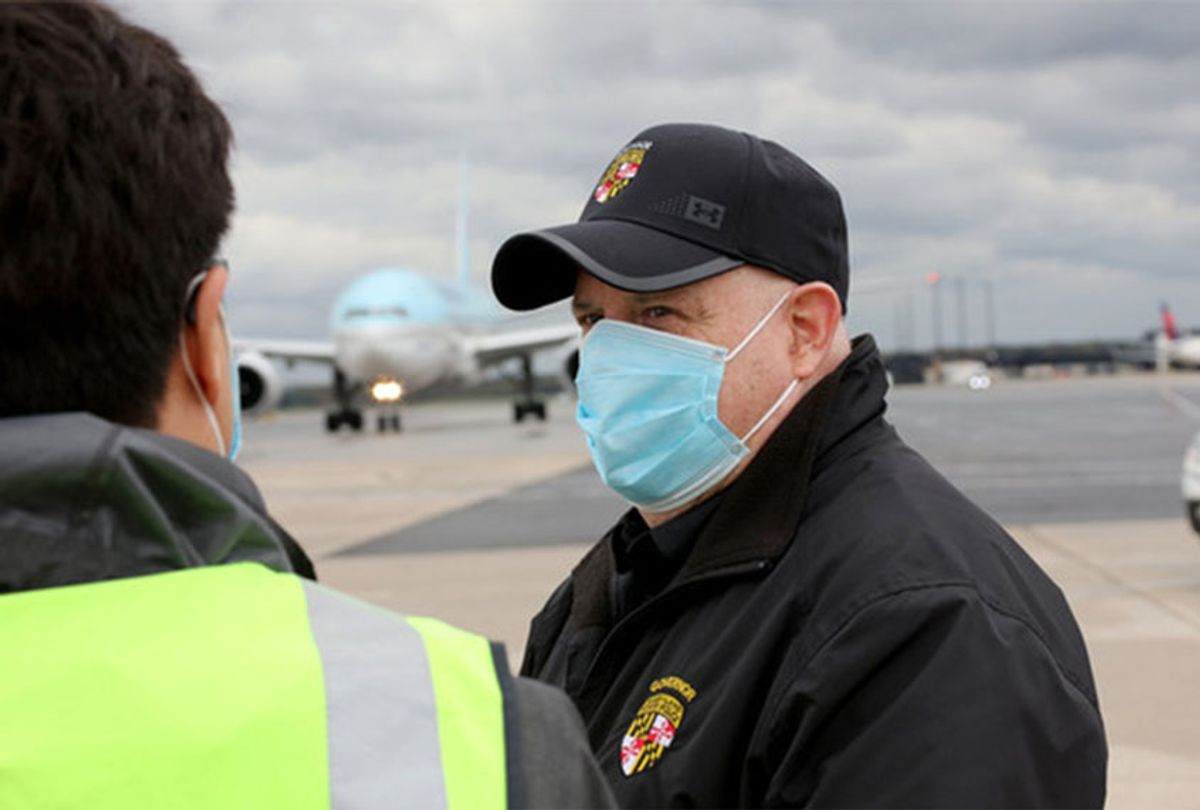 Despite being the governor of a small state, Larry Hogan secured coronavirus test kits from "13 time zones away," thanks to "nearly a month of diplomacy talks" and "middle of the night" negotiations. His "tell it like it is" approach provides "a contrast with the president."

That was the storyline Hogan wanted, and he got it, in no small part because the Maryland governor offers an irresistible profile for the media: a Republican — yes, a Republican! — who criticizes Trump. Having checked that box, little else mattered.

The Hogan-initiated negotiations that led to a South Korean company flying 500,000 coronavirus testing kits to Maryland were glowingly reported on by the New York Times (4/20/20), NPR (4/21/20) and pretty much everyone else. The past few weeks, it's been hard to watch TV without seeing Hogan, the chairman of the National Governors Association, holding forth on shows like ABC's "The View" (4/21/20), Comedy Central's "Daily Show" (4/29/20) and MSNBC's "Morning Joe" (4/21/20).

Hogan's victory tour for what he dubbed "Operation Enduring Friendship" was set to continue with a live conversation on April 30, branded "Leadership During Crisis," with the Washington Post, a newspaper that generally loves him (FAIR.org, 11/21/18). But that morning, the bottom of the Post's front page had a damning exposé (4/29/30) on Hogan's South Korean gambit. 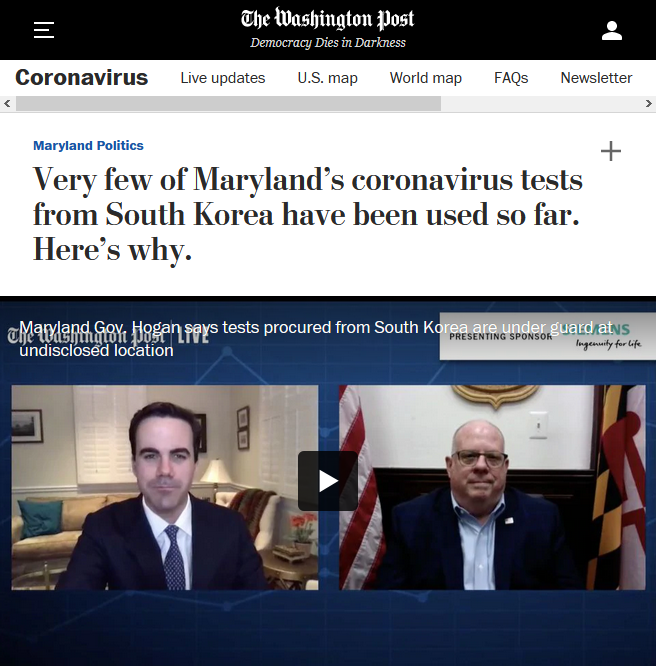 The Washington Post (4/29/30) published an exposé that punctured much of the hype surrounding the Korean tests — notably paired, however…

The tests Hogan purchased abroad for $9.5 million were "not in short supply in the United States," and in fact were available "for 20 to 30% less than what Hogan paid," the Post's Erin Cox and Steve Thompson reported.

"If somebody had come to us a few weeks ago and said we need a large order for Maryland, we would have been…capable of taking the order and fulfilling it," a CEO of a company that makes COVID tests told the Post. "We always love to ship in the United States, because it's a lot easier to ship domestically than foreign."

Even if Hogan insisted on buying the tests from South Korea — which he may have done for publicity — he still paid 38% more than the Federal Emergency Management Agency (FEMA) did that same month for South Korean tests, the Post reported.

In addition to wasting a couple million tax dollars on what appears to be more PR stunt than public health measure, Hogan's claim that the tests were going to be an "exponential, game-changing step forward" was a vast exaggeration.

The U.S. testing deficiency isn't due to a lack of tests, but the ancillaries needed to make them work, which weren't a part of Hogan's Korean purchase. "Without things like reagents, [the tests] are sort of like paperweights," Montgomery County executive Marc Elrich, the Democratic chief of Maryland's largest county, told the Post.

Nearly two weeks after the tests arrived, AFSCME Maryland president Patrick Moran was wondering when they'd help his frontline workers. "We've been asking, 'Where are the tests? Where are the tests?'" the union leader told the Baltimore Sun (4/30/20). "The governor took a victory lap before finishing the job."

A week later, Maryland nursing homes, which have accounted for nearly 60% of the state's COVID-19 deaths, were still looking for the tests. "They don't exist," the CEO of an association of Maryland's long-term facilities told state lawmakers (Washington Post, 5/6/20).

Without the ancillaries, the tests aren't useful. Even Hogan (Baltimore Sun, 4/20/20) noted this, but only after proclaiming his "amazing" and "unprecedented" international purchase would "keep people safe all across the state." 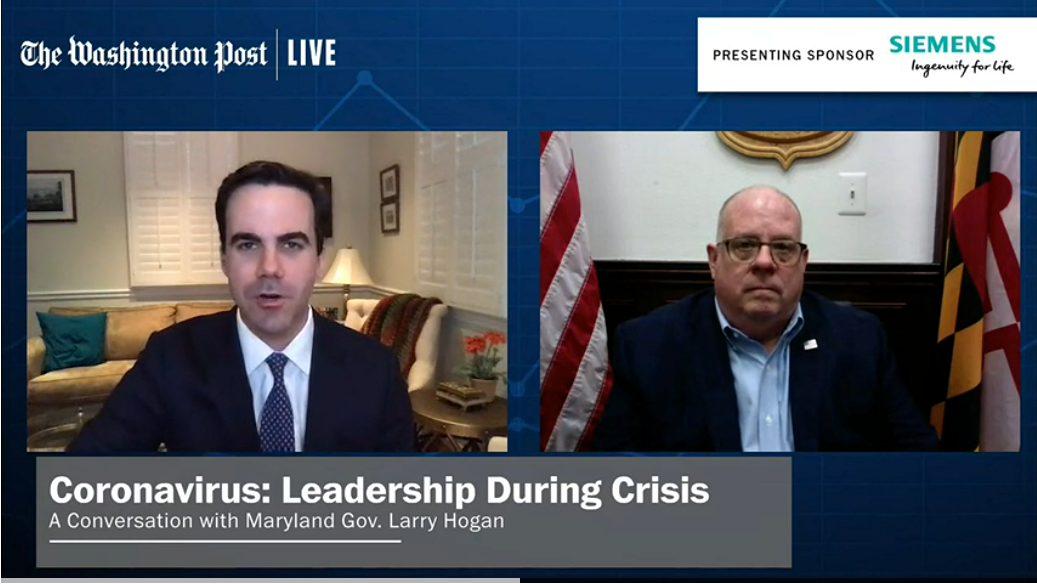 … with the Post's Robert Costa (4/30/20) interviewing Hogan about his "Leadership During Crisis."

Those pronouncements rang hollow after the Post's exposé. And now Hogan was set to take part in a Post conversation, awkwardly billed as "Leadership During Crisis."

Fortunately for the governor, he was questioned by national Post reporter Robert Costa, not the local reporters who exposed his suspect deal.

After Hogan (unsuccessfully) tried refuting the Post's reporting, Costa prompted him to create a new and more dramatic story line, one that would provide the governor with another round of media adulation. Turns out, there were sensational aspects of the story that Hogan had left out.

As an eager Costa looked on, Hogan recalled how he'd diverted the South Korean plane to Maryland's Baltimore-Washington International Airport. "We wanted to make sure that that plane took off from Korea safely, landed here in America safely, and that we guarded that cargo from whoever might interfere," said Hogan, who dutifully met the plane on the tarmac.

Once the wheels touched down, Hogan had "a large contingent" of Maryland National Guard and State Police on hand to secure the tests and whisk them away to "an undisclosed location," where they remain under guard, Hogan said, claiming the cargo "was like Fort Knox to us."

Wasn't it true, Costa asked, that Hogan feared the feds would seize the tests?

Indeed, "it was a little bit of a concern," said Hogan, citing examples in other states, like Massachusetts, which may have provided Hogan with his playbook.

When Massachusetts Gov. Charlie Baker's order for desperately needed masks was intercepted by the feds, the Republican governor teamed up with New England Patriots owner Robert Kraft, who used his team plane to fly 1.2 million N95 masks from China to Boston, resulting in glowing media accounts.

Following in his friend Baker's footsteps, Hogan also dramatically welcomed a plane carrying supplies from Asia to his state, then guarded the cargo from the feds. 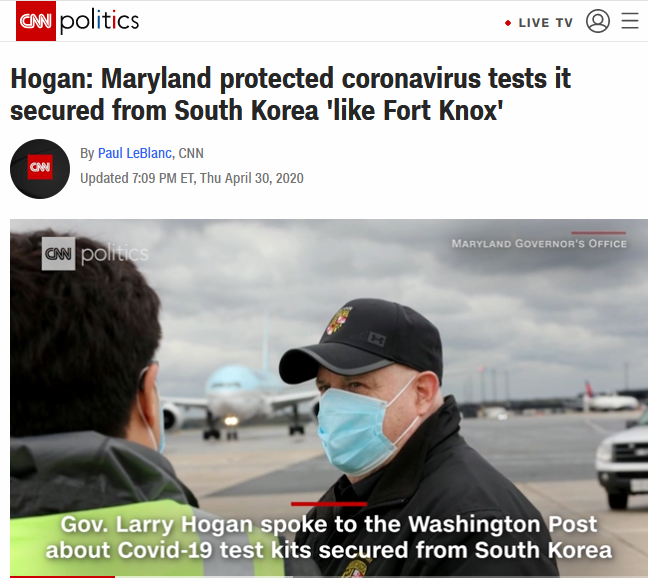 The governor shifted the storyline from "Hogan paid too much for tests" to "Hogan kept Trump from stealing tests" (CNN, 4/30/20).

The media jumped all over the improved story, ignoring the Post's exposé. Even astute outlets like Democracy Now (5/1/20) were swept off their feet by Hogan's anti-Trump pose.

Only days after its damning exposé, the Post (5/3/20) pretended its reporting had never happened. Hogan was again sharing the limelight with Baker, two Republican leaders who secured vital supplies abroad in defiance of Trump.

That's the storyline Hogan wanted all along.

Maryland, meanwhile, is suffering from one of the country's deadlier COVID-19 outbreaks, made worse by inadequate testing.