Trump has pushed a baseless conspiracy of an inflated death toll. Fauci tells Bernie Sanders the opposite is true 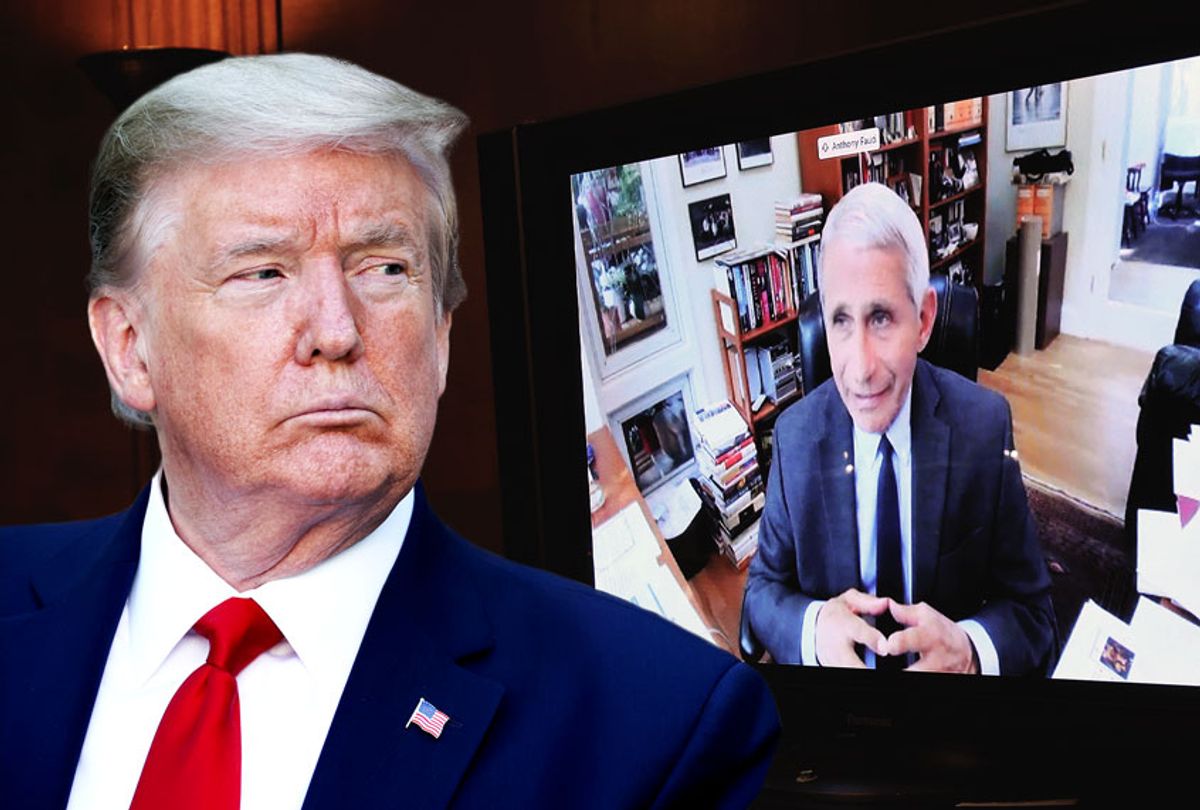 The top infectious disease expert in the U.S. told senators during a Tuesday hearing that "most of" his colleagues agreed that the national death count from the coronavirus pandemic was "certainly higher" than statistics showed.

The acknowledgment, by Dr. Anthony Fauci, the head of the National Institute of Allergy and Infectious Diseases (NIAID) and senior member of the White House coronavirus task force, came during a round of questioning from Sen. Bernie Sanders, I-Vt., amid an unprecedented Senate hearing conducted through videolink.

"The official statistic, Dr. Fauci, is that 80,000 Americans have died from the pandemic. There are some epidemiologists who suggest the number may be 50% higher than that. What do you think?" Sanders asked from his home in Vermont, a Red Hot Chili Peppers poster in the background.

"I'm not sure, Senator Sanders, if it's going to be 50% higher, but most of us feel that the number of deaths are likely higher than that number," Fauci responded with stacks of medical tomes in his home office. "Because, given the situation, particularly in New York City, when they were really strapped with the very serious challenge to their health care system, there may have been people who died at home who did have COVID who are not counted as COVID because they never really got to the hospital."

"So, in direct answer to your question, I think you are correct that the number is likely higher," he added. "I don't know exactly what percent higher — but almost certainly it's higher."

Fauci's latest remarks are a departure from a month prior, when he said: "I think there's more of a chance of missing some that are really coronavirus deaths that are not being counted, but I don't think that number is significant enough to really substantially modify the trends that we're seeing at all."

President Donald Trump now complains that the death count is inflated. Fringe supporters in government and right-wing media have echoed the conspiracy.

Fauci, who has run the NIAID since 1984, warned senators in Tuesday's hearing that "the consequences could be really serious" if states rush to relax social distancing guidelines.

"My concern is that we will start to see little spikes that will turn into outbreaks," Fauci said, adding that we "might not be able to control" some of those outbreaks.

"There is a real risk that you will trigger an outbreak that you might not be able to control," he said. "Not only leading to some suffering and death, but it could even set you back on the road to get economic recovery."

Trump declared that same afternoon that the country had "prevailed" over the challenges of establishing a functional testing program. He used the occasion to encourage states to reopen.

With the aim of reopening schools, the White House has set a target of 100 million vaccine doses by the autumn. Fauci dismissed that goal to senators, saying that neither a vaccine nor practical treatment would be available in time to resume school in the fall.

"In this case, the idea of having treatments available — or a vaccine to facilitate re-entry — would be something that would be a bit of a bridge too far," he said. "Even at the top speed we're going, we don't see a vaccine playing a role in the ability of individuals in going back to school this term."

In apparent reference to reports about a strange, little-understood disorder in kids apparently linked to COVID-19, Fauci warned that we should be "very careful, particularly with children."

"I think we better be careful if we are not cavalier in thinking that children are completely immune to the deleterious effects," he said.