Trump's childish lies are nothing new, but the media has sunk its teeth into his blatant testing hypocrisy 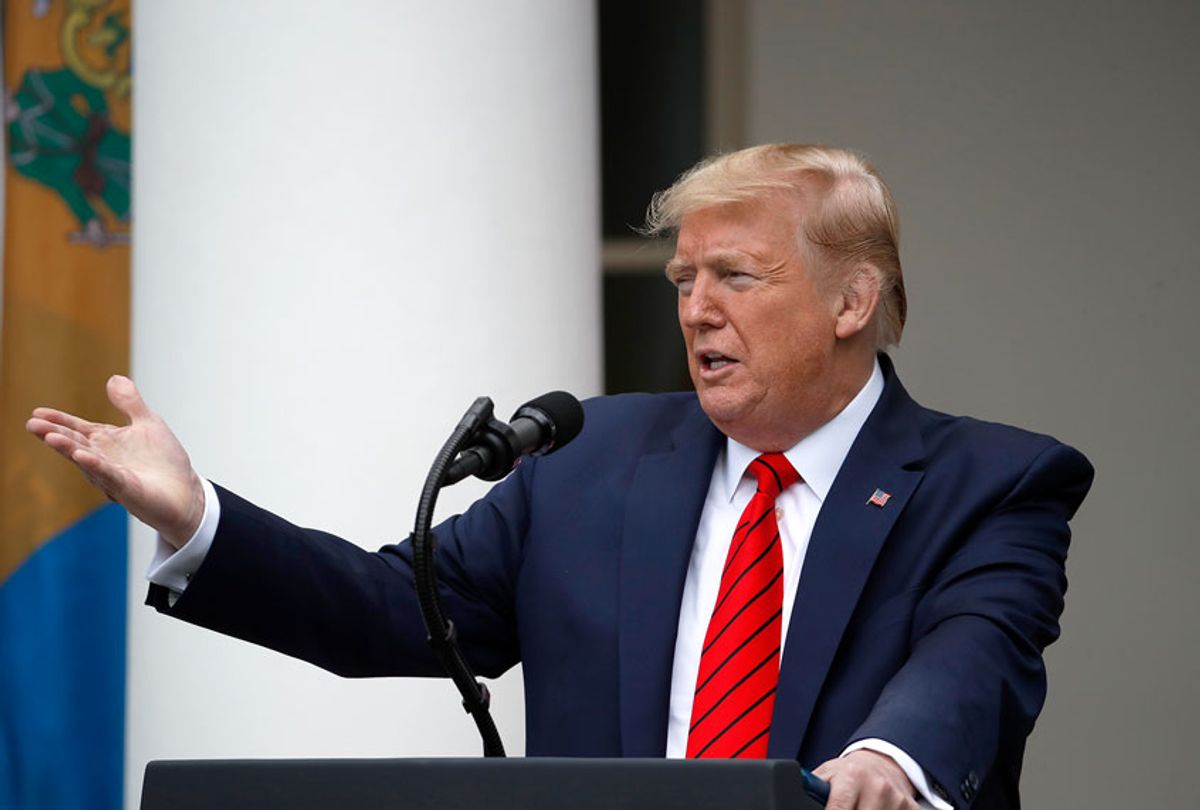 President Donald Trump speaks about the coronavirus during a press briefing in the Rose Garden of the White House, Monday, May 11, 2020, in Washington. (AP Photo/Alex Brandon)
--

There is nothing as politically corrosive as hypocrisy, and Donald Trump is wallowing in it.

His White House is scrambling to test everyone in sight — often multiple times — to contain a COVID-19 outbreak that involves at least two staff members and possibly many more.

At the same time, however, Trump is urging ordinary Americans to return to work with no way to know who around them might be contagious.

It's not just hypocrisy — it's "Hunger Games"-level hypocrisy, with ample testing for the ruling class while the rest of us fight for scraps and are forcibly enlisted as "warriors" in a battle to restore the rich man's economy.

Confronted with questions about this obvious double standard at a news conference on Monday afternoon, Trump unleashed his usual arsenal of confabulation, denying the underlying reality and attacking the media.

Most notably, he repeatedly insisted that any American who wants a test can get one — something that's wildly untrue. "If somebody wants to be tested right now, they'll be able to be tested," he said.

Whether he was knowingly lying or engaging in magical thinking or clueless or delusional or projecting from his own experience — who knows? It's entirely possible that it's all those things at once. Trump genuinely doesn't seem to understand the point of testing. "One person tested positive, surprisingly, because, the previous day, tested negative," he said Monday. That echoed comments he made last week about a staffer who "tested very good for a long period of time, and then all of a sudden … she tested positive out of the blue."

Do I need to say it? The whole point of testing is to identify people who have gone from negative to positive. (Stephen Colbert on Monday night nominated Trump's statement in the category of "dumbest thing ever spoken by man.")

Trump even went so far as to announce on Monday that every American worker could get tested every day "very soon." If anyone had believed him, that would have been major news. That would be about 150 million tests a day. We're doing about 300,000 a day right now.

Trump's entire news conference was a farce, from his pronouncement that the country has "prevailed" over the pandemic (later he clarified that he meant "prevailed on testing") to his childlike refusal to explain what he meant by "Obamagate" ("You know what the crime is," he said, after being asked what the crime was) to his stomping off in a huff at the end.

When asked point blank about his hypocrisy by a woman reporter, Trump lit into her:

Q: There does seem to be a double standard here, Mr. President, where members of your own staff can get tests frequently when they need it, but ordinary Americans cannot.

Q: So when will the rest of America have the same access that members of your own White House have to testing?

Now that we're doing so well on tests and so quick and so fast — five minutes, etc. — and so accurate, you're complaining that we're getting too many tests. So, you can't win.

The best-case scenario here for Trump is 1) to create so much confusion about what's real that the public doesn't really know what to think, and 2) for the media to drop this storyline in order to chase the next one (ideally, "Obamagate"). This is a perfect example of what NYU journalism professor Jay Rosen calls "the manufacture of confusion."

But this particular story line may defy Trump's usual tactics, because the narrative is so simple — and the press smells blood.

"Testing for me, but not for thee"

That was exactly how CNN anchor Jake Tapper put it on Monday afternoon.

Washington Post "Plum Line" blogger Greg Sargent on Monday called it "the sort of glaring double standard that's catnip to political media: The White House is taking extensive steps to protect Trump and his top advisers with resources that are largely unavailable to the rest of us, in part due to his own dereliction."

And that's not all, Sargent wrote:

It's also that this shatters the larger illusion Trump is trying to weave with his magical reality-bending powers — that the coronavirus has been so tamed by his stupendous leadership that it's now safe to reopen the country, setting the stage for an equally spectacular Trump-marshaled comeback.

If people around Trump are not protected from the virus in the most highly secured workplace in the country, how can it be safe for anyone else to go back to work?

In an article last week headlined "The sharp hypocrisy of the White House position on testing," Washington Post reporter Philip Bump pointed out that everyone Trump interacted with during a visit to a mask factory in Arizona had been tested by the White House.

"This is a step beyond simply screening employees for symptoms such as coughing or fevers," Bump observed. "This is an effort to create a safe, virus-free bubble around Trump and his team."

Also in the Washington Post, reporter Amber Phillips wrote that the White House outbreak "raises the question: How can it be safe for the average American business without such testing capabilities or room to put such protocols in place to reopen its doors? A majority of states have started at least a partial reopening, despite the fact that there isn't nearly sufficient testing to monitor everyone who wants to get back to work."

How nice for them, right? In fact, that's how we'd all like things to work but he doesn't want any more testing because it makes him "look bad."

Trump will not self-quarantine. He doesn't need to. He can get tested any time he wants to. Nice for him. Too bad for everyone else.

(If you missed it, please read my column from last week: "Trump blocks national testing program — why? Because tests make us 'look bad.'")

Most damaging of all, perhaps, is that the late-night comedians are onto Trump as well. This is gold for them.

After quoting White House economic adviser Kevin Hassett's comment over the weekend that "It is scary to go to work," Colbert said:

Really? You work in the most tested place in the world and you're scared? Hey, I've got a spooky story for you: You're driving on the highway late at night, when suddenly, a hideous old man rises up in your back seat and says, [Trump voice:] "You should go back to your job at the meatpacking plant — Donny want burger."

The Trump administration understands the importance of testing to safely reopen the economy because they're testing themselves, they just don't care about testing you…

They're looking out for themselves, not you. That's why they're testing themselves and stuffing bailout money into the pockets of big corporations and the wealthy…

The point is not that the president shouldn't get tested; it's that if he wants to force working people back into the economy prematurely in the middle of a deadly pandemic, he should make sure everyone else can get tested, too.

Even if they don't get another shot at Trump soon, reporters can be counted on to keep peppering the new White House press secretary, Kayleigh McEnany, on this topic. They tried twice last week.

CNN's Jim Acosta asked at the briefing on Wednesday: "Why shouldn't all Americans who go back to work be able to get a test before they do to feel comfortable in their own work environment to be interacting with other individuals?"

And Zeke Miller of the AP asked on Friday: "Why should the average American, whose workplace doesn't have access to these rapid tests, feel comfortable going to work if the White House isn't even safe for people?

McEnany didn't respond with anything of substance.

Hypocrisy is hardly new to Trump. So many of his campaign promises — to help working and middle-class Americans and "drain the swamp," for example — have been utterly hypocritical. But the reality in most cases is complicated. As a result, he has managed to sustain the illusion within his base that he is not, in fact, saying one thing and doing another.

Here, it's not so complicated: Tests for me, but not for thee.