Incompetence is contagious: The White House is infected — and that tells you everything

Donald Trump is such a failure he can't keep his own workplace free of the coronavirus. Why does anyone trust him? 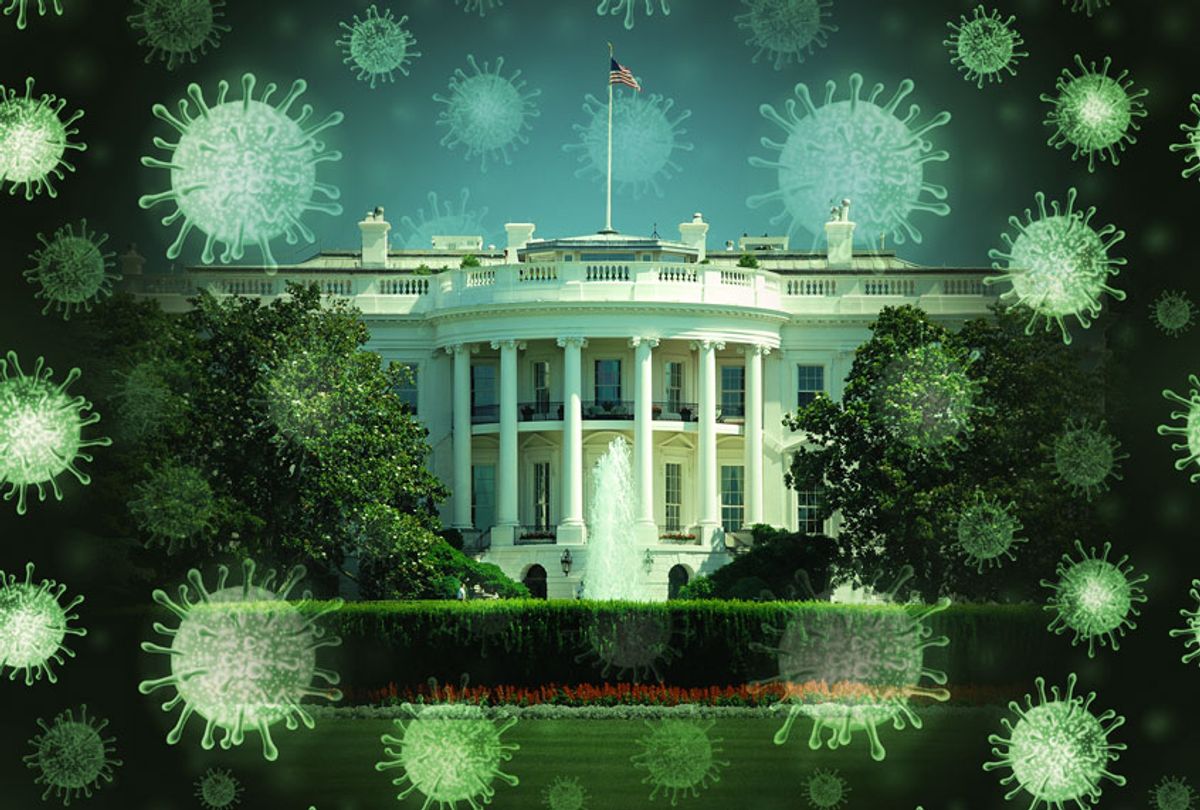 The long-term ramifications of the Kennedy administration's handling of the Soviet introduction of nuclear weapons into Cuba are still being debated by experts. But there's no argument over the fact that John F. Kennedy's decisions in October 1962 successfully prevented a nuclear war as the world teetered on the brink of Armageddon, permanently enshrining the Kennedy response as the gold standard in crisis management and foreign policy.

While we're here, take a guess at the outcome of the missile crisis had Trump been in charge back then. ExComm, the group of national security advisers who counseled the president during that crisis, would've been Jared Kushner and ... well, that's it. Trump would have ended up fear-eating inside an underground continuity-of-government shelter, shrieking into a ham radio about how viciously he'd been treated over his cozy relationship with Khrushchev. The rest of us would have been vaporized. Maybe Seattle would have survived — and Kellyanne Conway.

Here we are, 58 years later, living the nightmare scenario.

We're discovering in real time what happens when there's a major crisis and the president is a bumbling, narcissistic loudmouth with zero aptitude for even entry-level crisis management. This is what it looks like when a president fails the Cuban missile crisis test, and fails it spectacularly.

This warped, self-serving, garishly-painted reality show host's calamitous ineptitude is evident all around us, with 81,000-plus American deaths in nine weeks. That's more than 20,000 times greater than the American deaths during the 2012 U.S. consulate attack in Benghazi, and we're nowhere close to being done with COVID-19 or Trump.

By way of a recap, a recent study by the Princeton Medical Center indicated that if Trump and other officials had implemented stay-at-home and social distancing measures just four days earlier than they did, the daily death toll now would be closer to 1,000 Americans, rather than roughly 2,000.

Stack this on top of another study showing that COVID-19 deaths could have been cut by 90 percent had measures been taken by March 2. (Trump held a public rally in Charlotte, North Carolina, on March 2, featuring 8,000 Red Hats in attendance, along with guests Lara and Eric Trump.)

During the time when he could have made a difference, Trump did the least he could do without doing nothing: a token travel ban from China and literally nothing else — no plan, no nothing — while repeatedly downplaying the broader threat for weeks on end until it couldn't be avoided. By then, it was too late. The figurative missiles from Cuba had already been launched.

Instead of rising to the occasion, Trump was far more concerned about not spooking the Dow. Trump figured any acknowledgment of the seriousness of the virus might disrupt the economy, the only thing keeping his presidency afloat. Yet here we are anyway, with an unemployment rate of 14.7 percent and falling, erasing all the employment gains since 2009, and square in the midst of a second consecutive quarter with negative GDP growth. The pandemic, meanwhile, is still going strong — worsened by Trump's foot-dragging.

Perhaps the best illustration of Trump's unforgivably deadly response to COVID-19 is the fact that the White House — a veritable fortress and Trump's temporary home office — is now loaded with coronavirus infections.

If the president can't keep his own workplace safe from the pandemic, especially given the vast resources his workplace possesses, how the hell does he expect Americans to safely return to their own jobs?

The answer is simple: He doesn't care. All he cares about is hastily reopening the economy, irrespective of the risks, so maybe he'll have a better shot at re-election. Everything else is just … in the way.

During a Rose Garden press conference on Monday, and just before he stormed off like a petulant child, Trump said this about testing: "If people want to get tested, they get tested. But for the most part, they shouldn't want to get tested. There's no reason. If they feel good, don't have sniffles ... they don't have any problem."

First of all, "sniffles" aren't a usual symptom of the virus, and perhaps knowing such things, say, nine weeks ago might've been a good idea. Secondly, people who are returning to work after many weeks at home absolutely want to know if their coworkers are infected, hence the testing. And finally, Katie Miller was asymptomatic — no "sniffles," and no actual symptoms of the virus either. The only reason the White House learned about Miller was because of the daily testing. The president clearly can't, or won't, connect the dots.

No wonder the White House has been breached.

Trump's staff should have been routinely testing and practicing social distancing from the beginning. Instead, Trump simply pretended there was no real threat, just like he did with the rest of the country.

During his daily Trump Shows throughout March and April, the president didn't bother with any masks, distancing or contact awareness — turning up in the press room with officials packed shoulder-to-shoulder, while Trump himself routinely groped shared surfaces like podiums and microphones.

There was zero effort to set a good example, even with Fauci in attendance. The same went for Oval Office meetings and the like. Hell, Trump didn't even wear a mask when he visited an actual mask factory in (swing state) Arizona last week. All this is on top of his endless spoken and tweeted demands to end the crisis and get back to "normal." The great irony here is that as long as Trump is in charge, and as long as his people are following his idiotic example, there will be no return to normal, or even any plausible version of normal. Frankly, I'm shocked there haven't been more positive tests in the White House, including the president himself.

Only on Monday of this week, after reports of multiple positive tests in or near the West Wing, did the administration finally issued a mandatory mask order. To be clear, this rule was issued this week, in May, nine weeks into the crisis and only after the virus had infiltrated the White House.

The president is grossly incapable of protecting even his own family, including White House staffers Jared and Ivanka Trump, and perhaps even his wife and young son. Yet there are fellow Americans walking around right now, probably without masks — and probably armed, for some reason — who will insist that Trump's response has been the greatest in history. Trump's Red Hat supporters are following his piss-poor example directly into restaurants and public buildings at this moment, despite the reality that a measurable percentage of them will be drowning in their own fluids before June, but only after infecting other people, precisely because they did what their president told them to do.

Incompetence, it turns out, is also contagious. Even if you work in the most secure building in the nation.