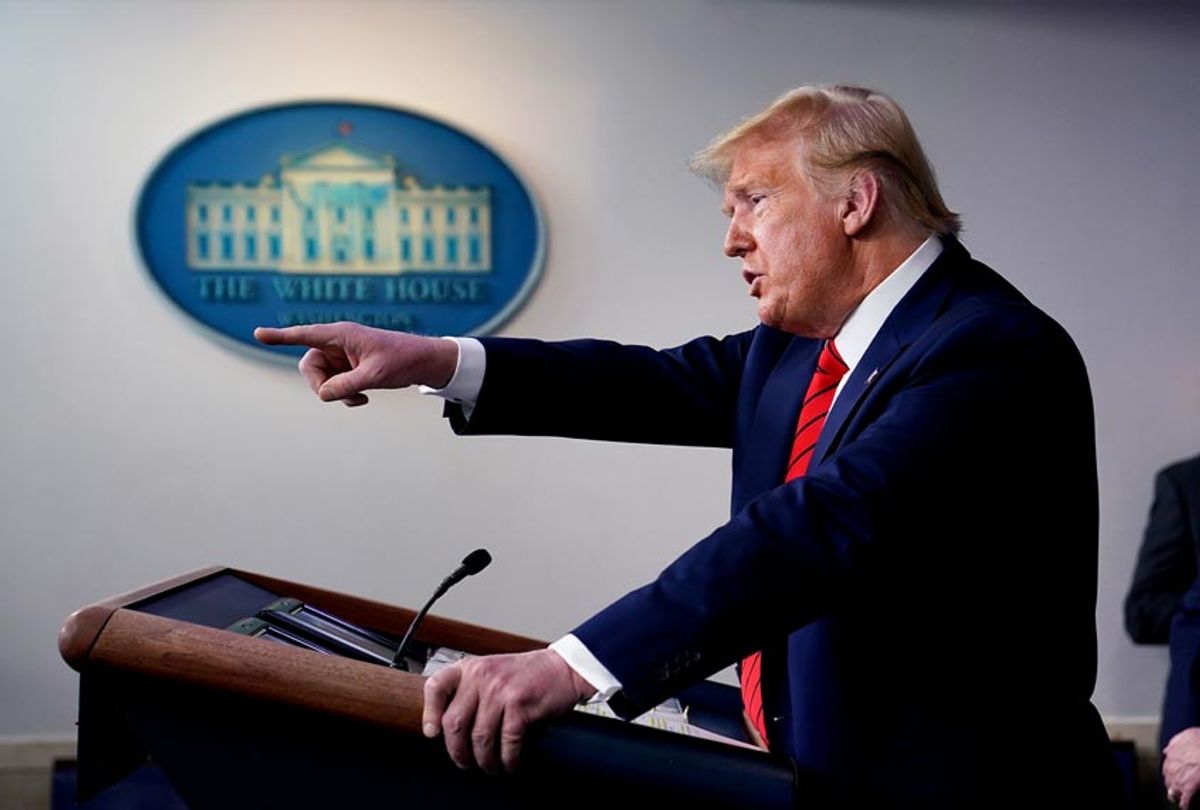 A leaked unreleased White House coronavirus task force report showing cases spiking in areas across the country has undercut President Donald Trump's claim that cases are declining across the nation.

This is, of course, not true. Though cases are decreasing in 14 states, they are rising in nine states, according to The New York Times. A lack of widespread testing in 27 other states, plus Washington and Puerto Rico, suggests that cases in those areas are being undercounted.

But a leaked coronavirus task force report obtained by NBC News shows that some parts of the country — rural counties in Tennessee and Kansas — have seen cases balloon by more than 1,000% in a matter of one week. Other counties in Missouri, Nebraska, Minnesota and Wisconsin saw increases of more than 400%.

Dr. John Ross, a professor at Harvard Medical School, pointed out that all but one of the top 10 counties that saw the largest increases voted for President Donald Trump in 2016.

A separate graph listing "locations to watch" include Kansas City, Mo., and Charlotte, which saw increases of more than 200% over the previous week.

The report found that statewide cases in Minnesota increased by nearly 100% over a single week while New Mexico, Tennessee, Wisconsin and the nation's capital saw increases of more than 40%.

Despite the alarming increases, Trump has continued to publicly and falsely claim that cases are falling nearly everywhere.

"Coronavirus numbers are looking MUCH better, going down almost everywhere," he tweeted Tuesday.

"Anybody that claims we're on a downward trajectory nationally is out of touch with reality," Dr. Irwin Redlener, the director of the Columbia University National Center for Disaster Preparedness, told NBC News, adding that even the rising numbers do not tell the full story. "There isn't a single state in the union that has sufficient testing."

Though states like New York, New Jersey and Massachusetts, which were hit hard early, have seen numbers decline, the nation has a rising curve when New York's massive totals are excluded.

"It's not appropriate to say the U.S. is consistently on a downward trend at all," Redlener said. "In some places, it might be the direct opposite of that."

Trump has also complained to advisers about the way that deaths are counted, arguing that the "real numbers are actually lower," Axios reported last week.

But medical experts, including those on Trump's own task force, say the opposite is true.

"Most of us feel that the number of deaths are likely higher than" the 80,000 that is currently reported, Dr. Anthony Fauci, the head of the National Institute of Allergy and Infectious Diseases, testified to a Senate committee on Tuesday. "The number is likely higher. I don't know exactly what percent higher, but almost certainly, it's higher."

Fauci also pushed back on Trump's optimism and pressure on states to reopen businesses during the hearing.

"If some areas, cities, states or what-have-you jump over those various checkpoints and prematurely open up without having the capability of being able to respond effectively and efficiently, my concern is that we will start to see little spikes that might turn into outbreaks," Fauci said. "I have been very clear in my message — to try to the best extent possible to go by the guidelines, which have been very well thought out and very well delineated."