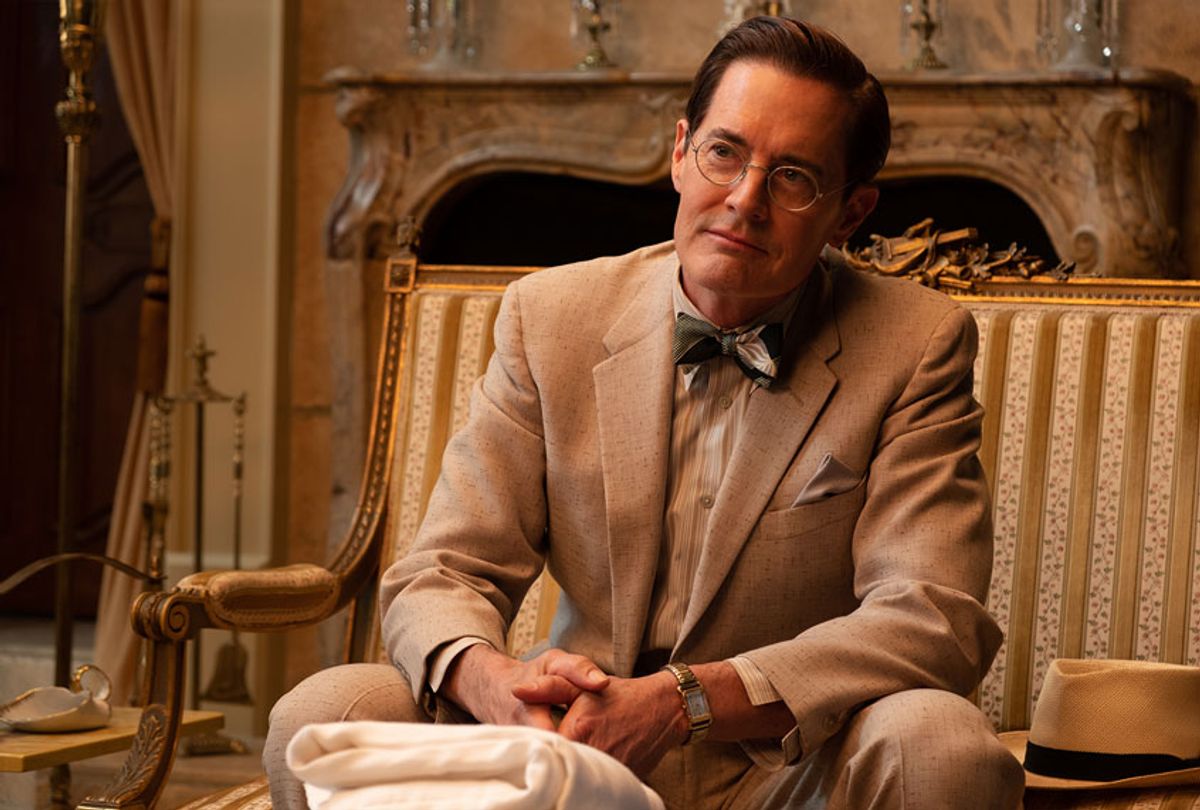 Writer/director Josh Trank's (of "Fantastic Four" infamy) arty new film, "Capone," now available on demand, shrewdly focuses on the last year of the notorious gangster (the always engaging Tom Hardy) as he's ailing. Rather than play out his life of crime or capture, this is a probing character study of the career criminal out of prison and living in exile in Florida. A sweaty, coughing, incontinent mess, with a gravelly, barking voice you can light a match on, Al Capone is suffering; his mind is deteriorating from neurosyphilis. Hence the need for Dr. Karlock (Kyle MacLachlan), who gives him diapers, replaces his cigars with carrots, and applies some art therapy in the secret hope of getting "Fonzo" (as he's called) to reveal where he may have stashed $10 million.

MacLachlan has only a handful of scenes in this intriguing film, but the "Twin Peaks" actor lends a calming but also sinister presence in a drama that plays like a fever dream; Capone has wild flights of fancy, moments of delusion and paranoia, and performs acts of real violence.

The actor recently spoke with Salon about his "Capone," working with Hardy, and his longtime collaboration with legendary director David Lynch.

Why do you think we are fascinated by gangster's lives in general and Al Capone in particular? "Capone" looks at just the end of his life, which I think is its strength.

That was the thing about the film that I responded to — that we don't know this side of him. What does it look like when someone has syphilis, and to have a powerful man, like Capone, reduced to an infant? People are fascinated by gangsters because they do things outside of most people's range of experience and accepted behavior. All of us are stunned by what they get away with.

Tom Hardy is kind of feral as Capone. You have a few scenes where Karlock tries to comfort or interact with him. Can you talk about working with Hardy in character?

Hardy playing this and taking this on — he's extraordinary; it was really fun to work opposite him. It was an interesting dynamic. I think that when you are a lion tamer, you have to exhibit confidence and calmness and try to keep things as easy as possible, so you don't anger the beast. There are other pressures working on the doctor that cause him to behave in a way that is necessary for him to survive. You don't see him sweating, but under the shirt and the jacket, he was sweating. Oh, and a wonderful shout-out to [costume designer] Amy Westcott for the doctor's bowties. I thought it was a brilliant choice. It's unexpected, and off just enough to make you say, "He wears a bowtie" — it's not an obvious choice.

Karlock tries to use art therapy to engage Capone. What value do you place in art or therapy?

I think there's a value in art, and when I walk through an art gallery, I'm different when I come out. There is a part of me that feels Karlock is trying to help Capone. And he does, finding a substitute for his nicotine habit. He's trying to heal the person, and uses the art therapy to calm him down, but ultimately, he has [an ulterior motive]. But there is a reluctance there. Karlock's resisting.

Karlock is a practical man. Do you find you tend to be typecast in uptight characters who have a dark underbelly?

I think that archetype is one where you go by how he looks/I appear, like the character in "Twin Peaks" — the upstanding FBI agent who is trustworthy but has another side of him that is able to deal with the dark side and can handle that. Lynch tapped into that, and it's been reinforced in different roles I play. I was really excited and overwhelmed to play the characters in "Twin Peaks" and play other types of characters. I was thrilled with the opportunity, but you have to deliver. I like doing something other than what's expected.

I like that I never know which Kyle is going to show up in a film you're in. You tend to alternate between film and TV, playing leading man roles and character parts. What is the appeal of doing a small independent film like "Capone"?

This was really about the director and cast. Tom was a draw for me, to get to work a scene together with an actor I admire. Josh Trank's "Chronicle" was special and asked unusual questions. It took me on a journey I wasn't expecting, and I thought he would have an interesting interpretation on "Capone," so generally it's who is involved, who are the creatives? I want to be part of that journey. I don't know how it will turn out, but I want to go on that journey with this people.

On that note, I know you have also apologized publicly and repeatedly for "Showgirls," but the new documentary, "You Don't Nomi," is coming out on demand June 9. It repositions "Showgirls" as a "disasterpiece." Have you learned to embrace this camp classic yet?

I wish the doc well. I'm still of the mind that the film is what it is. I'm happy it's found an audience. We make entertainment, and it's certainly that, so why not?

You have talked at length about working with David Lynch, and owing your career to him. What might people be surprised to learn about your collaboration?

Gosh, I don't know . . . we're very good friends and drink a lot of coffee together, which is probably all understood. There's a familial relationship between he and I and Laura Dern, and we've kept in contact and remained friends, which doesn't often happen moving from project to project. It's been a pleasure. We do like to make each other laugh during filming, so there's that.

How do you make David Lynch laugh?

He'll ask you to do something while the camera is rolling, say, go pick up that coffee cup, and he gets a laugh out of me doing something unusual and funny.  So, I try to raise the stakes. It's childish, but funny.

"Capone" is currently available to rent or buy on demand.