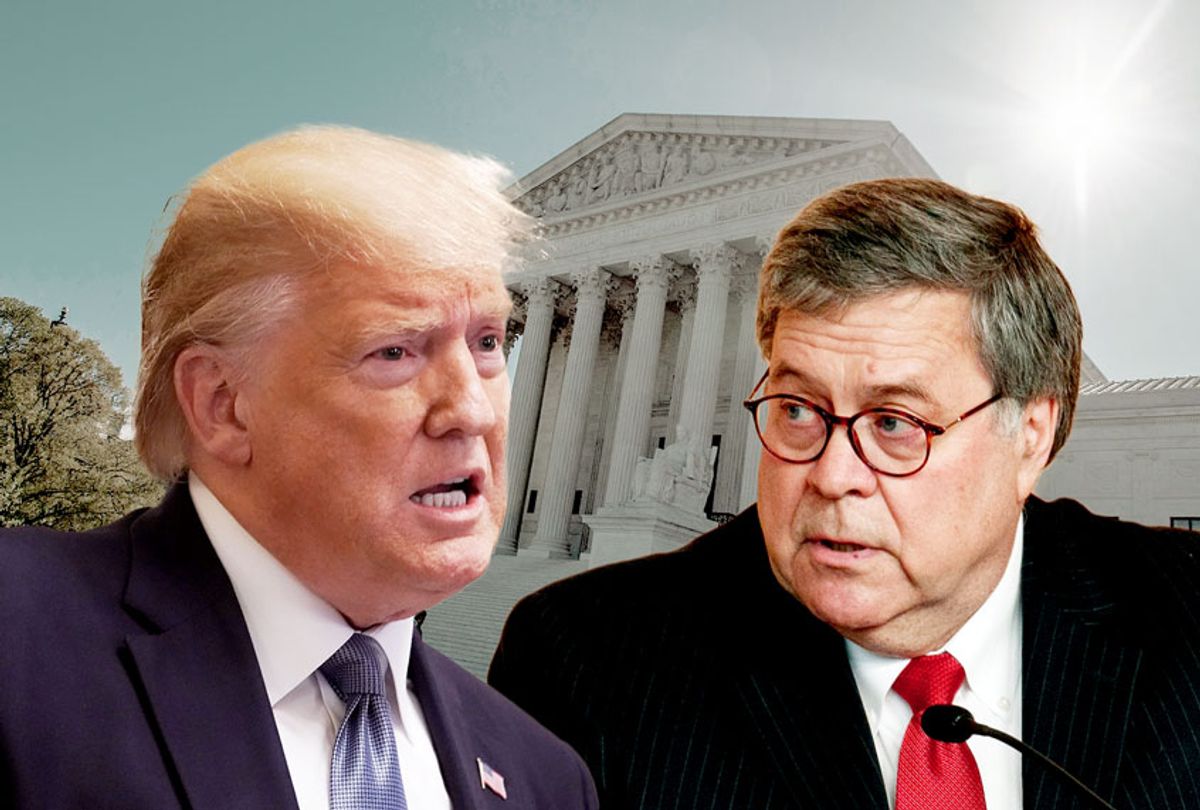 A Trump lackey took a major step Thursday toward establishing a Trump dictatorship.

An extraordinary court filing demonstrated that Trump has one standard of justice for his enemies and an entirely different one for his allies. The court action shows how fully Trump has turned our Justice Department into his personal protection agency. Goodbye equal justice under the law.

The 108-page filing is rife with falsehoods and tortured interpretations of established facts. Such is a mendacious necessity since Flynn twice confessed to multiple crimes under oath in open court. It argues the lies Flynn told FBI agents were not "material" to the case against him. The trial court judge already has dismissed that as nonsense.

It also argues that there was no legitimate reason ever existed to investigate Flynn. That is astonishing since Flynn was secretly a well-paid agent of foreign interests while serving as Trump's national security adviser. The claim is all the more remarkable because it is made by an ostensibly Republican administration. Didn't Republican clamor for decades about Russian spies and influence peddling?

Based on all this and more we can now reasonably refer to Trump's Injustice Department.

Trump could have pardoned Flynn. "He was an innocent man," Trump said in a bald-faced lie in front of video cameras Thursday afternoon. "I'm very happy for General Flynn."

But a pardon would not have allowed Trump to mark his territory, signaling to any who dare challenge his assertions that he is above the law.

From president to dictator

By demonstrating unfettered control over our Justice Department, Trump has achieved a critical step required for a transition from a president with limited authority to de facto dictator.

The motion to drop the Flynn case fits Trump's fact-free declaration last summer. "I have an Article II," he said, "where I have to the right to do whatever I want as president."

Our Constitution allows no such thing. You might think that Trump, who has been saying since 1987 that he should be president, would have read Article II. It is only 1,023 words. Either he never read Article II or he doesn't care about the limits it places on him. One example is the requirement that he "shall take Care that the Laws be faithfully executed."

Attorney General William Barr—better and properly called Attorney Specific to Trump—lacks unilateral power to dismiss the case against Flynn. Dismissal requires court approval under Rule 48(a) of the Federal Rules of Criminal Procedure.

Eminent lawyers stood beside Flynn when he confessed twice in open court to felonies. He allocated to crimes for which charges were dropped in a plea deal. Given this robust record of criminality, the Injustice Department's action raises obvious questions:

The court filing follows what must have been a ferocious, months-long fight inside Barr's Injustice Department. Some career prosecutors resigned from the case earlier to avoid sullying their reputations.

Timothy Shea, a Barr protégé installed three months ago as acting U.S. attorney for the District of Columbia, signed the motion. K

Missing from the latest court papers were the signatures of Jocelyn Ballentine, an assistant prosecutor, and Brandon Van Grack, a veteran espionage case prosecutor. Van Grack resigned from the case in a one-sentence filing just moments before the motion to dismiss was submitted to Judge Emmet G. Sullivan of U.S. District Court.

Judge Sullivan can order Justice and its lawyers to explain these unusual actions. He could refuse to allow the case to be dropped or allow it, but with leave to refile the charges in the future. That would make Flynn vulnerable if Trump does not get a second term.

Flynn and his company were on Putin's payroll and worked for Turkish interests with deep ties to the Kremlin. Flynn was paid at least $680,000, some of which he lied about. At the time he was the president elect's designated national security adviser.

Judge Sullivan has  told Flynn "arguably you sold out your country." Trump, on Thursday, called Flynn "a hero."

"All along, you were an unregistered agent of a foreign country while serving as the national security advisor to the president of the United States," Sullivan told Flynn.  "That undermines everything this flag over here stands for."

"This is a very serious offense… A high ranking senior official of the government making false statements to the Federal Bureau of Investigation while in the White House, very serious crime."

That the Trump administration would shield a secret foreign agent who was the White House intelligence chief shows how important it is to Trump that he keep Flynn in his fold. Flynn made himself susceptible to blackmail by taking Russian money and lying about it, but it is not known if Flynn engaged in unquestionably traitorous conduct.

The Flynn case has its roots in Russian interference to help Trump win the 2016 election. So do other allies. Among these are the felony prosecutions of Roger Stone, Trump's dirty tricks specialist, and campaign Manager Paul Manafort, a longtime foreign agent for dictators and Russian-speaking criminals and politicians.

Trump denies the Russians helped him become president. But America's intelligence agencies, the bi-partisan chairs of the Senate Intelligence Committee, the 418-page Mueller report and emails from none other than Donald Trump Jr. all make clear the Kremlin helped Trump defeat Hillary Clinton. The only issue on which the facts are not complete was whether Trump was a passive beneficiary or he knowingly worked with the Kremlin, whether obliquely or hand-in-glove.

The president's eldest son was told in writing in June 2016 that the Kremlin wanted to help his father become president. Trump Jr. replied enthusiastically "love it" and then met at Trump Tower with Kremlin agents. The son then lied and denied, telling both Fox News and ABC News that no such contact took place. More than a year later, as The New York Times was about to expose these lies, the namesake son released the damning emails.

Trump has openly talked six times about being president for life. When criticized for such assaults on American Constitutional principles, Trump lamely claimed he was joking. He also said last June that he anticipates that after completing the maximum of two terms his supporters will "demand that I stay longer."

Trump campaigned on a promise to destroy our government, an issue that has disappeared from the news after getting almost no attention during his campaign.

That promise came after Trump told Fox News in 2014 how to get rid of the Affordable Care Act, aka Obamacare. "When the economy crashes, when the country goes to total hell and everything is a disaster… you'll have riots to go back to where we used to be when we were great," he said.

On Wednesday, as the COVID-19 pandemic death toll surpassed 75,000 Americans he renewed his demand for the law to be undone. Repeal would leave at least 20 million Americans with no health insurance.

Just weeks after assuming office Trump held an unannounced meeting in the Oval Office with Russia's foreign minister and Russian ambassador and a "photographer" for the Kremlin-owned Tass news agency. The Russians revealed the meeting. They also disclosed that Trump gave them "sources and methods" intelligence, which is closely guarded to protect human and technological assets.

In 2018 in Helsinki Trump declared that he trusts Putin fully, but not America's intelligence agencies.

These actions demonstrate Trump's disloyalty and unfitness to be president, yet Senate Republicans refused to hear testimony after the House impeached him last year. Senate Republicans then voted twice not to convict except for one vote by the 2012 Republican presidential nominee, Mitt Romney, now the junior senator from Utah.

This latest abuse of power to protect a criminal crony who was on Vladimir Putin's payroll and a secret foreign agent is more than an impeachable offense. Trump, Barr and Shea also sent a clear message: Team Trump harbors no regard for the rule of law, the foundation of our liberties and democratic freedoms.