"Did Trump's friend get preferential treatment under the guise of appropriate releases to protect BOP inmates?" 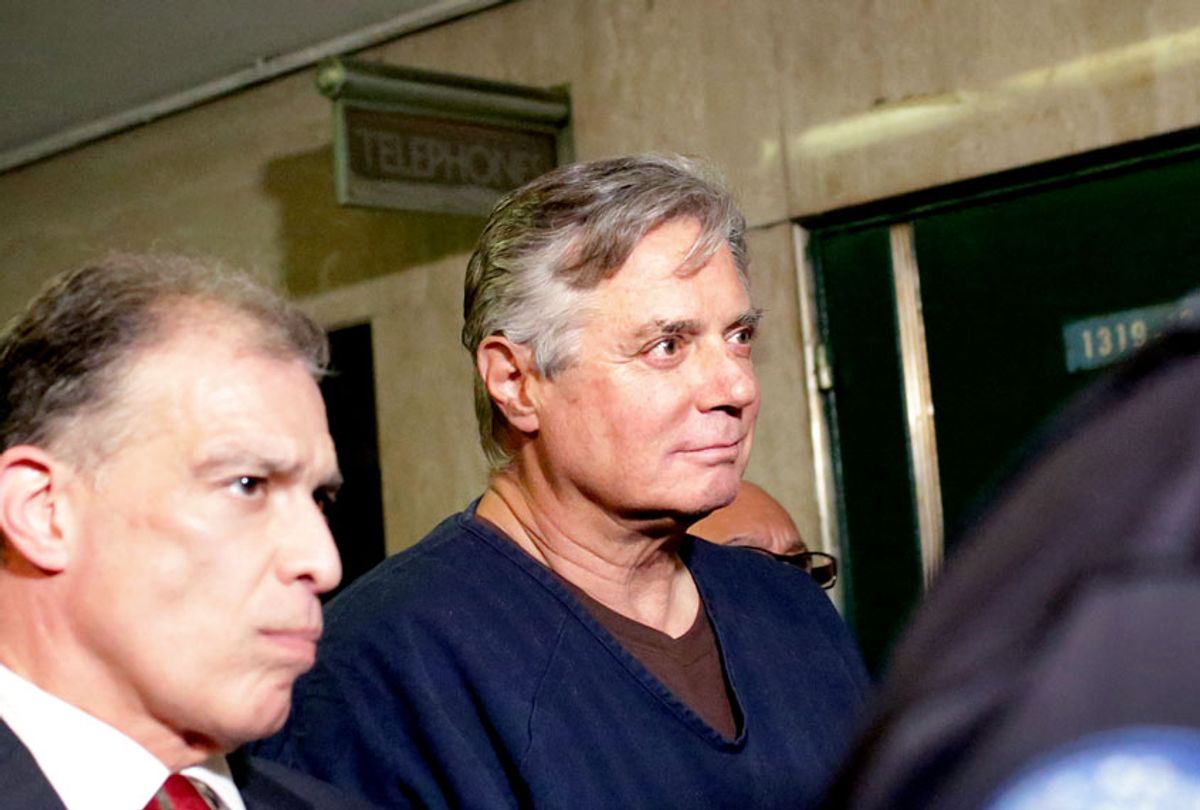 The release of President Donald Trump's former campaign chairman Paul Manafort from prison Wednesday morning spurred immediate denunciations of the unequal treatment of prisoners in the U.S. criminal justice system in which the wealthy and well-connected are spared while millions of others are forced to face the spreading coronavirus pandemic with little or no hope of release.

As the Daily Beast reports:

Manafort has been serving out his seven-and-a-half year sentence at FCI Loretto in central Pennsylvania on charges related to Special Sounsel Robert Mueller's investigation. He was found guilty of tax fraud and conspiracy and was sentenced in March 2019. He wasn't due to be released from prison until November 2024.

At the age of 71, Manafort is considered to be at particular risk from the disease, which hits harder among older people. His lawyer, Kevin Downing, requested Manafort's early release from prison due to coronavirus-related health fears last month, saying that he'd been suffering health problems including high blood pressure, liver disease, and respiratory issues for years.

But whether Manafort was "at particular risk," was an issue of debate for some.

Law professor and MSNBC contributor Joyce Vance was among those asserting that Manafort's premature release "raises real fairness concerns," especially as hundreds of thousands of other prisoners in the U.S — including those with arguably much more dire circumstances — have not been released.

"Manafort doesn't qualify for compassionate release," Vance tweeted. "Did he get special treatment ahead of others who do? People in facilities with outbreaks or closer to the end of their sentence? Did Trump's friend get preferential treatment under the guise of appropriate releases to protect BOP inmates? Releases make sense but there must be a process based on objective criteria. Michael Cohen, much closer to the end of his sentence, was denied release after news he would be was made public."

In addition to the perception that Manafort was the clear recipient of special treatment due to his political connections to Trump, the larger issue for many remained the glaring example of inequality endemic to the U.S. criminal justice system.

Referenced by Professor Eddie Glaude Jr. of Princeton University, Tiffany Mofield was a 43-year-old woman who died of coronavirus complications in a New Jersey prison on April 29. As reporting by The Intercept's Alice Speri details, "Mofield's death underscores the devastating impact the coronavirus is having as it spreads through prisons and jails, where the health of incarcerated people was often neglected before the current crisis."

In a thread on Twitter posted in response to Wednesday's developments, defense attorney and prison reform advocate Scott Hechinger detailed the cases of many inmates who — unlike Manafort — continued to languish in prison even as the virus threatens.

With no nationwide urgency showed by prison officials or lawmakers for the release of most inmates, despire the growing risks to them, Hechinger said the Manafort case only highlights deep and grave injustices that have long existed.

"Right now, imagine how scared you are about contracting this virus. The precautions you take," he wrote. "Then think about how, right now, ​millions are trapped in close quarters. No ability to distance. To protect themselves. People are terrified and upset. And we should be too."

Since the Covid-19 pandemic touched off earlier this year, criminal justice reform advocates have been raising the alarm over just how vulnerable prison and jail populations are to the spread of the virus.

"This peril is immediate and pressing," wrote veteran civil rights leader Jesse Jackson in an op-ed in March. "There are 2.2 million Americans locked up at any one time, but over 11 million go through prison or jail gates in any one year."

Writing on the subject again last month, Jackson warned that "if the pandemic continues to spread through prisons, the toll in lives will soar."