Trump claims that this test is "more accurate" than others. The FDA warns it "may return false-negative results" 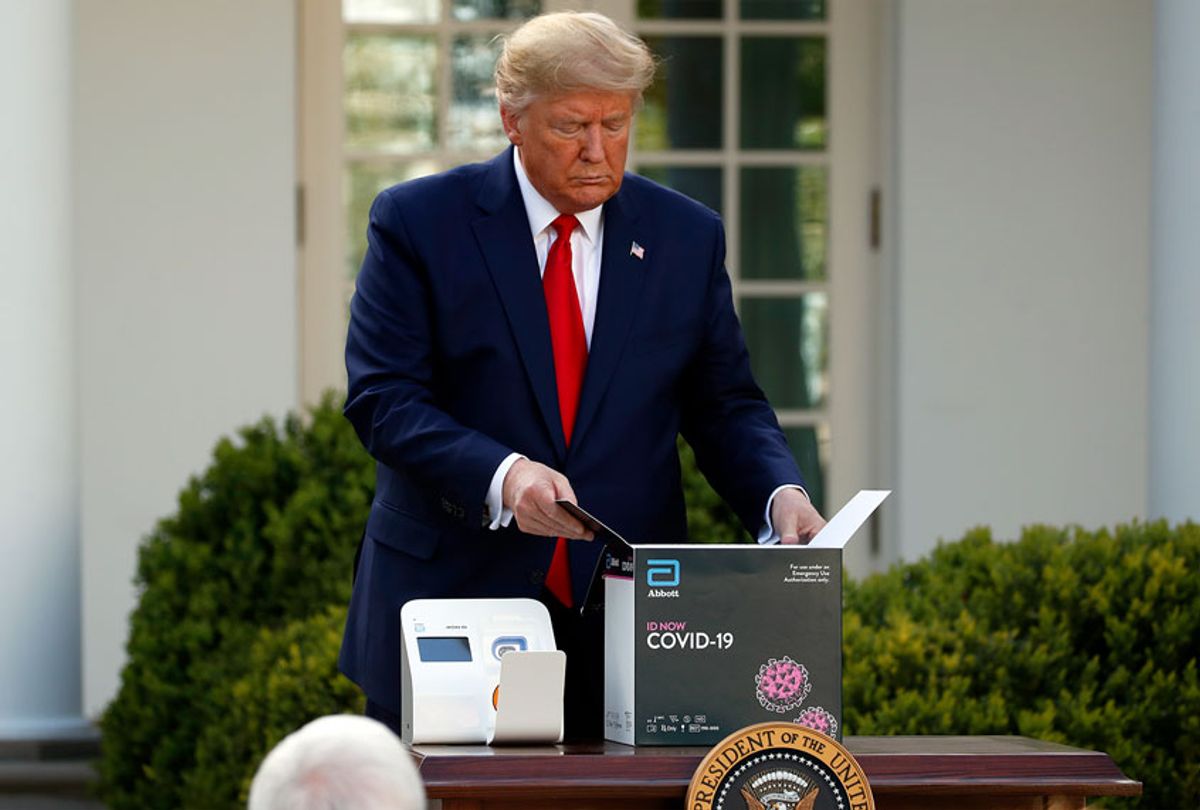 The Food and Drug Administration on Thursday issued an alert warning of "potential inaccurate results" from the Abbott ID NOW test for diagnosing COVID-19 used by the White House.

Questions have swirled about recent positive tests by administration aides who had regularly tested negative for the disease. The White House relies on the Abbott test, which Trump demonstrated during a news briefing last month, because it produces fast point-of-care results. Other tests require samples to be sent off to a laboratory.

"It's a whole new ballgame," Trump bragged as he claimed that it was "probably more accurate" than other tests.

But the FDA warned that early data suggested that the "test may return false negative results." The agency said it issued the alert "in the spirit of transparency." It received "15 adverse event reports about the Abbott ID NOW device that suggest some users are receiving inaccurate negative results."

The warning also cautioned that "any negative test results that are not consistent with a patient's clinical signs and symptoms or necessary for patient management should be confirmed with another test."

"We are still evaluating the information about inaccurate results and are in direct communications with Abbott about this important issue," Dr. Tim Stenzel, the head of In Vitro Diagnostics and Radiological Health in the FDA's Center for Devices and Radiological Health, said in a statement. "We will continue to study the data available and are working with the company to create additional mechanisms for studying the test. This test can still be used and can correctly identify many positive cases in minutes. Negative results may need to be confirmed with a high-sensitivity authorized molecular test."

The alert came after a study by researchers at New York University (NYU) found that the machine, which produces results within five to 13 minutes, missed more than 48% of positive cases when using dry nasal swabs. The study also found that it missed about a third of positive samples when using nasopharyngeal swabs, which are inserted deep into the nostril and stored in a liquid solution.

The study, which has not been peer-reviewed, concluded that the test was "unacceptable in our clinical setting." Abbott refuted the study by affirming that its reported rate of false negatives was only 0.02%.

"ID Now is an important tool that delivers information where it's needed most," the company said in a statement arguing that the NYU study was "not consistent with other studies of the test."

"It's unclear if the samples were tested correctly in this study," the statement added. "In communications with the users of the test, it is performing as expected."

A separate study from researchers at the Cleveland Clinic, which also has not yet been peer-reviewed, found that the Abbott tests missed nearly 15% of positive cases.

"So that means if you had 100 patients that were positive, 15% of those patients would be falsely called negative," researcher Dr. Gary Procop told NPR. "They'd be told that they're negative for COVID when they're really positive."

The company refuted that study as well, claiming that any problems must be related to how the samples are stored.

"ID NOW performs as expected and we have confidence in the performance of the test," the company told the outlet. "When a direct swab is used, the test is performing as expected."

Hospitals reported last month that swabs stored in liquid solutions might become diluted and produce negative results for infected patients. Abbott revised its instructions to advise testers to place a dry swab directly into the machine, which was the focus of the NYU study.

The FDA said it was investigating whether the false negatives were related to the types of swabs used or how the samples are stored.

"Moving forward, Abbott has agreed to conduct post-market studies for the ID NOW device that each will include at least 150 COVID-19 positive patients in a variety of clinical settings," the agency said. "The FDA will continue to review interim data on an ongoing basis."

But the Abbott test has gained popularity after being touted by Trump, who stood by the test when questioned about the FDA's warning Friday on the White House lawn.

There are now about 18,000 ID NOW machines in use around the country, and the company aims to ship about 2 million tests a month by June.

"A high rate of false negatives would definitely be cause for concern," Dr. Thomas Inglesby, who runs the Center for Health Security at the Johns Hopkins School of Public Health, told NPR. "If that happens, then they wouldn't be told to isolate themselves, public health wouldn't seek out or quarantine their close contacts, doctors wouldn't know what illness they have. Their family members wouldn't know to protect themselves."

Dr. Alan Wells, a pathologist at the University of Pittsburgh, argued that none of the tests were bulletproof, though he acknowledged that the "the ID NOW test seems not to be as effective."

"All of the tests do miss a number of patients — anywhere from 5 to 30%," he told the outlet. "So regardless of whether it's ID NOW or other tests, we recognize that we cannot say with any assuredness that you are safe or not."

Wells said he used the ID NOW tests to conduct tests on 50 patients.

"The ID NOW missed roughly about half those patients," he said. "It's not due to the dilution. Our evidence is that this is not the sole cause of the lower effectiveness of the ID NOW."