"I was wrong," McConnell tells Fox News. "They did leave behind a plan, so I clearly made a mistake in that regard" 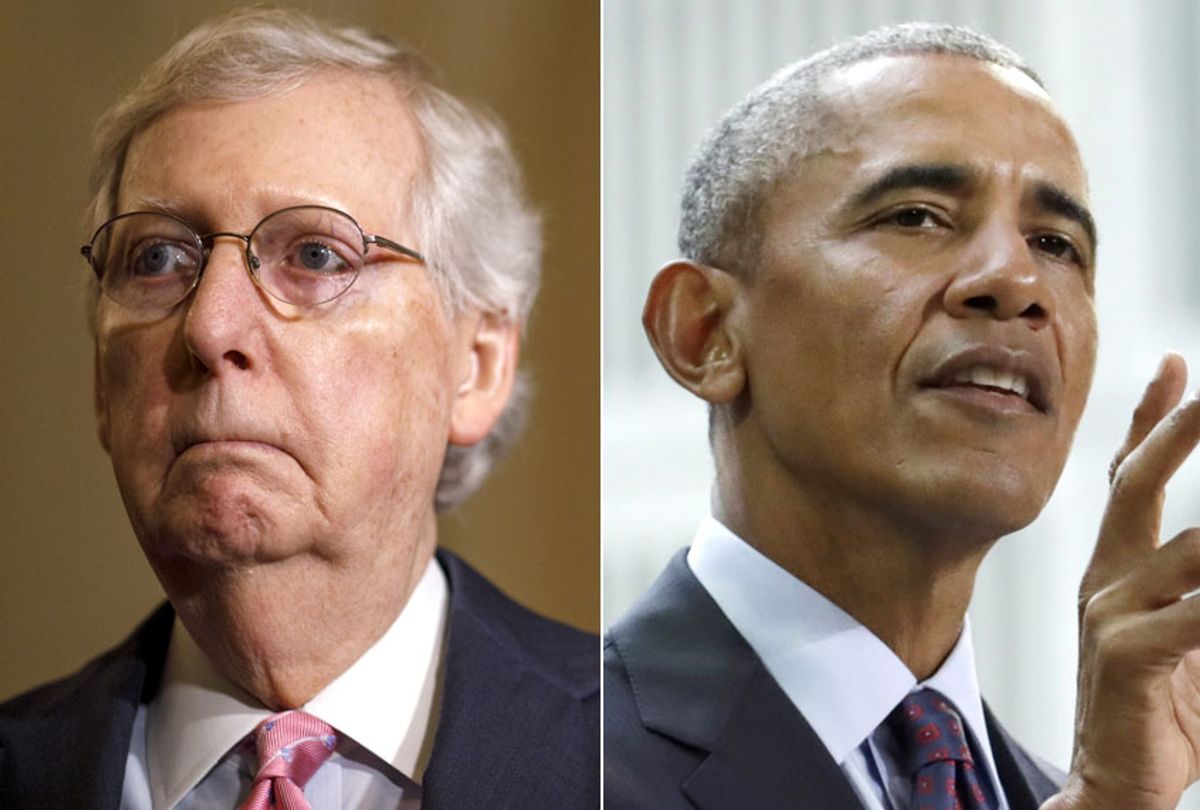 Senate Majority Leader Mitch McConnell, R-Ky., has admitted that he was "wrong" for claiming that former President Barack Obama did not leave President Donald Trump a "game plan" to handle a pandemic.

"I was wrong," McConnell told Fox News on Thursday. "They did leave behind a plan, so I clearly made a mistake in that regard."

McConnell's admission comes days after he tried to blame Obama for Trump's botched response to the coronavirus pandemic. The Republican leader previously tried to blame the Trump administration's delays in responding to the outbreak on impeachment.

"They claim pandemics only happen once every hundred years, but what if that's no longer true? We want to be early, ready for the next one, because clearly the Obama administration did not leave to this administration any kind of game plan for something like this," McConnell said in an interview with Trump daughter-in-law and campaign adviser Lara Trump.

"As to whether or not the plan was followed and who's the critic and all the rest, I don't have any observation about that," McConnell told Fox News on Thursday. "Because I don't know enough about the details of that . . . to comment on it in any detail."

Not only did the administration leave a detailed playbook but senior Obama administration officials also led a pandemic response exercise for incoming Trump officials in January 2017, as required by a new law signed by Obama in 2016, Politico reported earlier this year.

White House press secretary Kayleigh McEnany claimed to reporters Thursday that the "Obama-Biden plan that has been referenced was insufficient" and eventually was "superseded by a President Trump-style pandemic preparedness response plan."

Trump claimed that his plan was "much better . . . much more complete" and a "lot tougher."

"We were — we were given very little when we came into this administration," Trump attempted to claim, even though his officials disbanded a White House pandemic team created under Obama.

"We've never heard of any pandemic preparedness plan. This was the first time they are mentioning it — that she brought out these binders," she said on Thursday's edition of "Meet the Press." "We're going to try to find more details. It seems unusual that here we are in mid-May that they'd now start talking about what their preparedness plan was."

"What we're fighting against is these long-term trends in which being selfish, being tribal, being divided, and seeing others as an enemy — that has become a stronger impulse in American life. And by the way, we're seeing that internationally as well. It's part of the reason why the response to this global crisis has been so anemic and spotty," Obama said in the audio. "It would have been bad even with the best of governments. It has been an absolute chaotic disaster when that mindset — of 'what's in it for me' and 'to heck with everybody else' — when that mindset is operationalized in our government."

McConnell lashed out at Obama in response to the comments.

"I think President Obama should have kept his mouth shut," he said Monday. "I think it's a little bit classless, frankly, to critique an administration that comes after you. You had your shot. You were there for eight years."

Obama did not take McConnell's advice, calling out Wednesday "all the time that's been lost" during Trump's coronavirus response. The president also advocated for "better policy decisions" based on insights from medical experts.

He followed up with only a one-word tweet on Thursday: "Vote."