Do we really want a new Cold War with China? Mainstream media thinks so

Do we really want a new Cold War with China? 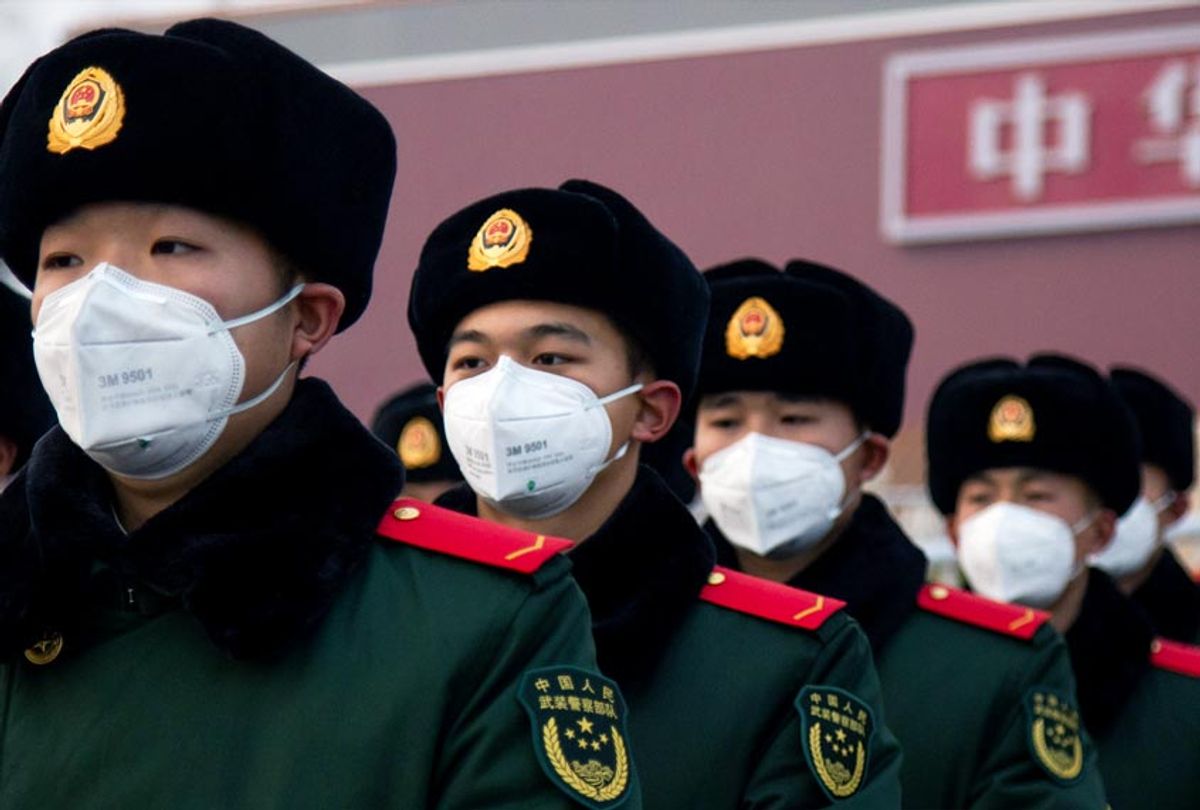 Corporate media is laying the ideological groundwork for a new cold war with China, presenting the nation as a hostile power that needs to be kept in check.

The Washington Post (4/23/20) ran an article by Republican Sen. Mitt Romney, the second sentence of which said, "The COVID-19 pandemic has revealed that, to a great degree, our very health is in Chinese hands; from medicines to masks, we are at Beijing's mercy." America, in this conception, is under Chinese domination, a tyranny that's evidently imposed not only by the Chinese government, but by Chinese people generally.

Details like the U.S. having more than 21 times as many nuclear warheads as China, or the fact that it's the U.S. dollar and not the Chinese yuan that underpins the global financial system, do not enter into consideration. Instead, because the U.S. imports a great many goods made in China, Romney urged readers to understand China as Americans' oppressors, who implicitly must be resisted.

Romney warned his audience that China has a "grand strategy for economic, military and geopolitical domination" and thus "The West" must "respon[d]" with "a unified strategy among free nations to counter China's trade predation and its corruption of our mutual security."

He said China is conducting an "alarming military build-up." Sure, the available evidence indicates that the U.S. spends almost three times what China does on its war apparatus, but "Americans should not take comfort in our disproportionately large military budget," Romney cautioned, because, supposedly, "China's annual procurement of military hardware is nearly identical to ours," though few know about this "outside classified settings."

Then he revealed China's supposed threat to America's "security": "Because our military has missions around the world, this means that in the Pacific, where China concentrates its firepower, it will have military superiority." In other words, China is a danger because it "concentrates its firepower" in the ocean nearest to it, while the U.S. divine right to empire requires that its military saturate the globe.

The senator argued that "action should be applied in national security sectors" such as phone technology and medicine, and that "the free nations must collectively agree that we will buy these products only from other free nations" as part of a plan to "protect … our security."

The idea that China is a threat to Americans' security is baseless: China hasn't threatened to attack America, while the U.S. has a massive military presence in the Asia/Pacific region. The Pentagon, with bipartisan support, wants to engorge that menace with a $20 billion budget increase, and with offensive weaponry such as land-based Tomahawk cruise missiles that had been banned by the Intermediate-Range Nuclear Forces Treaty until the U.S. abrogated the deal. China, meanwhile, has no military installations anywhere close to the United States.

Romney repeatedly called on "free nations," a grouping in which he included the U.S., to take on China. In doing so, he cast the potential conflict as a civilizational battle between freedom and dictatorship — that the U.S. has the highest prison population per capita on Earth does not trouble the senator's framework.

Romney also referred to China or its economic practices as a "predator," "predatory" or "predation" eight times, making the U.S. and its allies the supposed prey. "Today," Romney wrote, "Beijing's weapon of choice is economic: The tip of its spear is global industrial predation." China is "a predator, unbound by the rules followed by its competitors," so "when the immediate health crisis has passed, the United States should convene like-minded nations to develop a common strategy aimed at dissuading China from pursuing its predatory path." Romney is propagating a timeworn worldview in which deceitful, barbaric Orientals take advantage of innocent, rule-abiding Americans whose businesses never break laws or do anything that could be viewed as predatory. 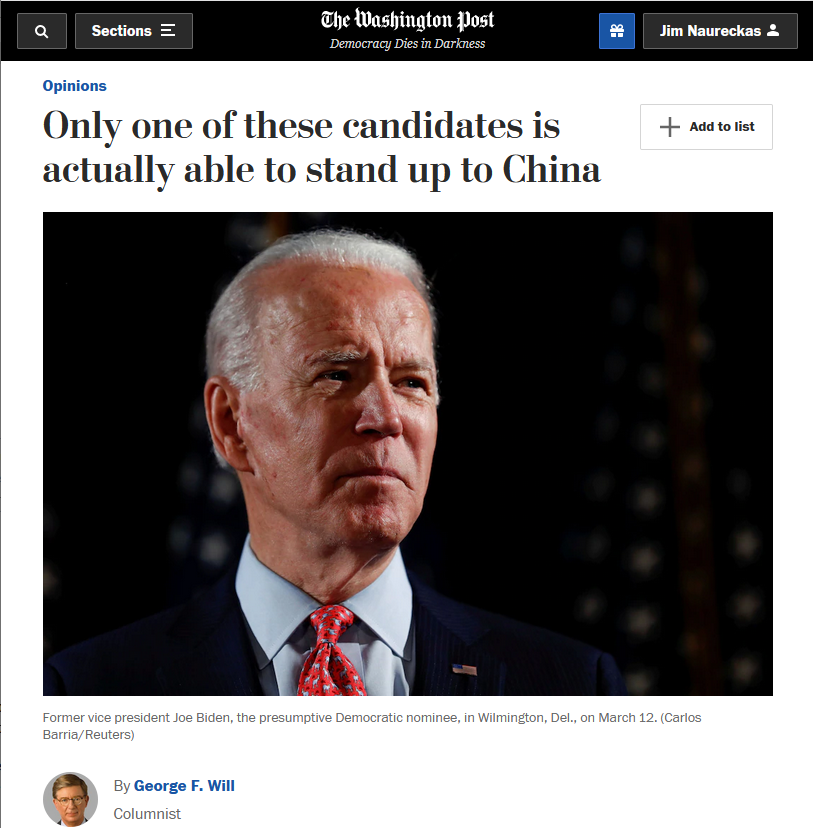 George Will (Washington Post, 4/29/20) claims that "more than any particular policy outcome, Americans want a sense that their nation … can adopt a robust realism regarding the Leninist party-state that is its principal adversary."

The Washington Post's George Will (4/29/20) likewise said that it's necessary to "stand up to China," advocating that the U.S. adopt "a policy of national strength" toward the country. This is the language of war, suggesting that China presents a danger to the U.S. that has to be met with American might.

Will encouraged presumptive Democratic presidential nominee Joe Biden to "practice what he preaches about bipartisanship by associating himself" with far-right Republican Sen. Tom Cotton's "measured but insistent support for an investigation into the possible role of a Wuhan, China, research laboratory in the coronavirus outbreak." By endorsing the racist, warmongering senator's proposed inquiry, Will is mainstreaming an extremely dubious conspiracy theory (Grayzone, 4/20/20) alleging that COVID-19 is a Chinese biological weapon unleashed, perhaps unintentionally, from a research lab in Wuhan.

Will also seemed to endorse Cotton's

question[ing] of the visas for people from China to pursue postgraduate studies here in advanced science and technology fields: If Chinese students want to study "Shakespeare and the Federalist Papers, that's what they need to learn from America. They don't need to learn quantum computing and artificial intelligence from America."

At the very least, Will amplified and declined to question the notion that Chinese students doing graduate scientific research in America should be viewed with suspicion, implicitly because they might be engaged in piracy or espionage on behalf of the Chinese government, though no evidence is offered for this accusation. It's a perspective that imagines that the wealthiest, most populous country on Earth might somehow be kept away from advanced technology — though in the long run, the U.S. has more to gain from Chinese research than the other way around (CounterSpin, 5/24/19).

Canada's Financial Post (5/4/20) went a step further, saying that "China Must Be Brought to Heel," animalizing language that hearkens back to when Western powers actually did dominate China, and treated the nation to such delights as the Opium Wars (London Review of Books, 11/3/11). 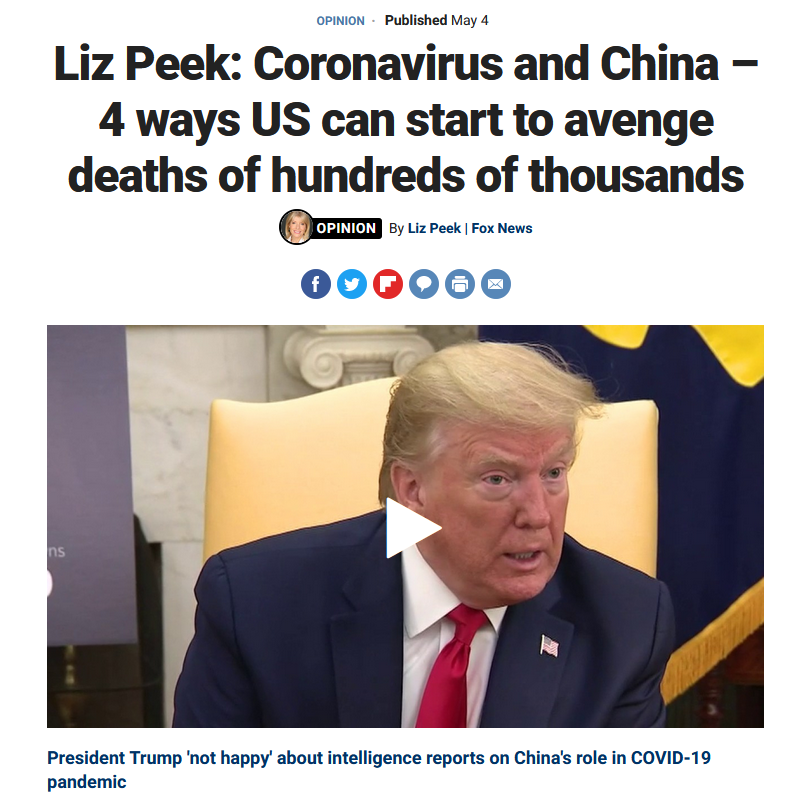 Fox News (5/4/20): "People everywhere will demand that Beijing pay a price for the enormous loss of life and the incalculable damage done to economies around the globe."

A Fox News article (5/4/20) went full fire and brimstone, calling for the U.S. "to avenge [the] deaths of hundreds of thousands" that have been caused by COVID-19. Another Fox article (5/4/20) said it was necessary to "hold China accountable" for the harm the coronavirus has caused, applauding Missouri's lawsuit against the country without noting one minor detail: U.S. courts have no jurisdiction to sue China (Reuters, 4/21/20). Another notable barrier to U.S. media revenge fantasies is that the U.S. and China have the world's largest bilateral trade relationship, something the U.S. is hardly in a position to break away from, with China's economy mostly up and running and the United States' still largely offline.

Similarly, the Boston Herald's Joe Battenfeld (4/14/20) contended that "Trump['s] Move to Hold China [and the] World Health Organization Accountable [Was] Long Overdue," a reference to Trump suspending funding to the UN's main infectious disease-fighting body. WHO gets 15% of its budget from the U.S.; Battenfeld himself acknowledges that withdrawing this "could [incapacitate] the agency's healthcare initiatives"; in other words, undermining global health during a worldwide pandemic is a good way to teach China a lesson.

The author also endorsed the U.S. "impos[ing] sanctions on China for its role in the spread of the coronavirus," the type of economic warfare the U.S. is waging against several countries, causing untold death and misery (Jacobin, 3/26/20). Given the fact that China's largely COVID-free economy is likely to be in far stronger shape than that of the U.S. for the foreseeable future, however, it's doubtful Washington will be in any position to impose sanctions on Beijing.

Further problems abound with the idea that the Chinese bad guys have to be punished for COVID-19 by the American good guys. As historian Vijay Prashad (People's Dispatch, 4/23/20) has demonstrated, the narrative of a Chinese-WHO coronavirus cover-up is itself profoundly flawed. And it's hard to see how China is to blame for the dismal U.S. response to the pandemic, which has been characterized by moves like the rejection of a coronavirus test approved by the WHO in January in favor of a test developed by the Centers for Disease Control and Prevention (CDC) that wasn't dispatched until February, and didn't always work properly once it was (Washington Post, 4/18/20).

Corporate media distortions and bombast are priming the American public to see China as a treacherous villain that has to be forcefully confronted, perhaps with violence. Presenting China — and Chinese people — as a threat to the United States and its people is that much more reckless at a moment when there is an "alarming surge in anti-Asian racism related to COVID-19" (NBC, 4/16/20). But such considerations don't trouble those who are in the business of ginning up the hatred necessary for a new cold war.