Calling on Americans to Vote Trump Out, The Lancet Eviscerates US President Over 'Incoherent' Covid-19 Response 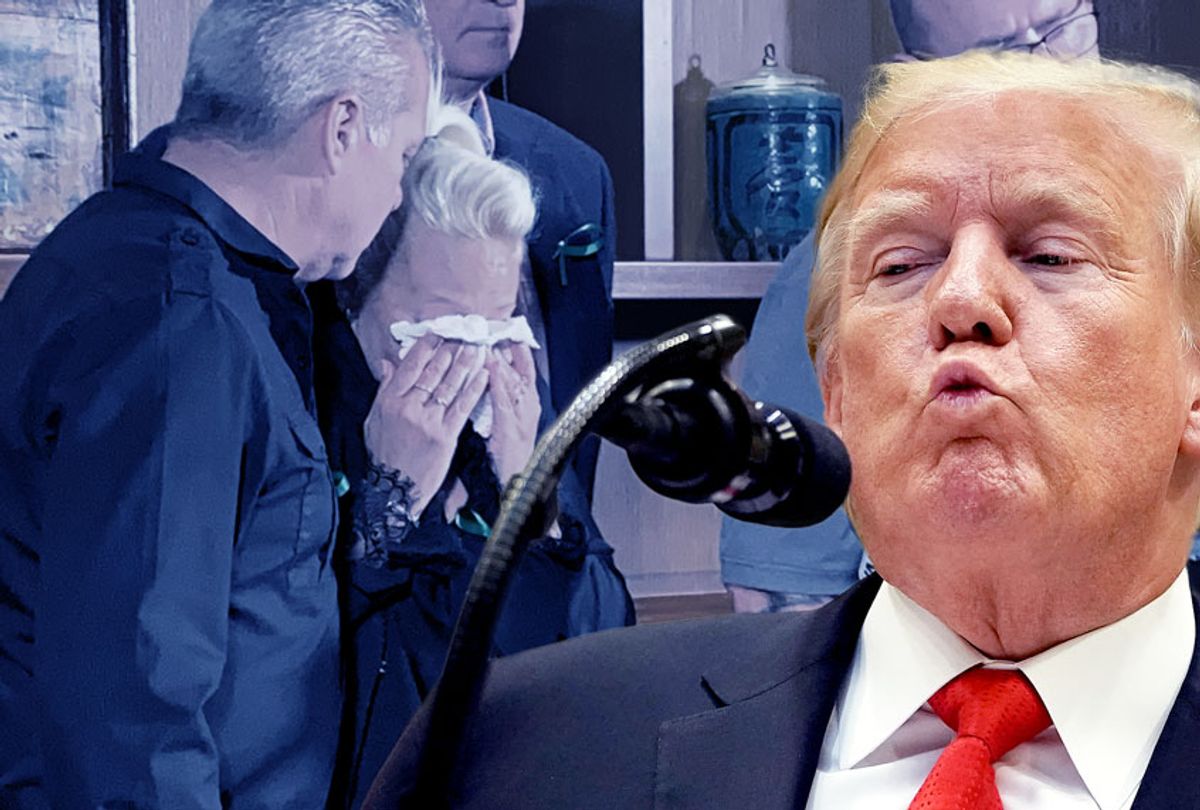 Parents of British Teen killed in car accident involving wife of a US Diplomat hold a press conference at the Parker Hotel in New York, New York on October 14, 2019. (Getty Images/AP Photo/Salon)
--

Esteemed medical journal The Lancet on Friday took an unusual step towards calling on American voters to remove President Donald Trump from office in November, condemning the Trump administration's "incoherent" response to the coronavirus pandemic and expressing shock at the CDC's inability to cope with the public health crisis.

The journal's frustration with Trump centered on the president's downplaying of the pandemic and his refusal to coordinate a robust national effort of social distancing, lockdown orders, and a testing regime to stem the Covid-19 outbreak.

"The administration is obsessed with magic bullets—vaccines, new medicines, or a hope that the virus will simply disappear," wrote the editors. "But only a steadfast reliance on basic public health principles, like test, trace, and isolate, will see the emergency brought to an end, and this requires an effective national public health agency."

Washington Post journalist Christopher Ingraham called the editorial a "scathing indictment" of the Trump administration's approach to the pandemic.

Public health experts including Dr. Anthony Fauci, director of the National Institute of Allergy and Infectious Diseases, and Dr. Rick Bright, a whistleblower at the Health and Human Services Department who was ignored by leaders in January when he pushed to procure medical supplies, have issued dire warnings in recent days about the need to ramp up testing and avoid reopening the economy too quickly.

But the CDC, once a "national pillar of public health," has been "marginalized" and undermined by the Trump administration since even before the pandemic began, hampering its ability to lead the nation's response, The Lancet editorial reads.

CDC Director Robert Redfield is heard from infrequently at press briefings, and in April joined Trump in suggesting the anti-malarial drug hydroxychloroquine could be useful as an experimental treatment for Covid-19 patients, saying "I think I would be confident to try hydroxychloroquine" and that the drug "does appear to be safe."

"The CDC needs a director who can provide leadership without the threat of being silenced and who has the technical capacity to lead today's complicated effort," wrote The Lancet editors. Last summer, an "intelligence vacuum" was left at the United States' CDC office in China when the administration called back the last remaining officer there, months before the first case of Covid-19 was reported in Wuhan.

The director of the agency's National Center for Immunization and Respiratory Diseases, Nancy Messonnier, has not been seen at a press briefing on the pandemic since late February, when she warned that Americans should prepare for strict social distancing and disruption to their daily lives. Messonnier's message was one that Trump has consistently resisted, preferring to push for quickly reopening the country just days after the White House reluctantly enforced a shutdown in March, and complaining that governors who have pleaded for more medical equipment were doing so only to hurt Trump's reelection chances.

The CDC's failure to take control of the pandemic—including its admission in mid-February, as the virus was beginning to spread across the U.S. that the test kits the agency had developed were flawed—has left the U.S. "nowhere near able to provide the basic surveillance or laboratory testing infrastructure needed to combat the COVID-19 pandemic," wrote the editors.

The Lancet linked the CDC's ineffectiveness partially to decades of weak support for the agency by Republican presidents, including Presidents Ronald Reagan and George W. Bush, who failed to provide funding to fight HIV/AIDS and to provide global reproductive health programs.

"Funding to the CDC for a long time has been subject to conservative politics that have increasingly eroded the agency's ability to mount effective, evidence-based public health responses," wrote The Lancet. "The Trump administration's further erosion of the CDC will harm global cooperation in science and public health, as it is trying to do by defunding WHO."

The editors concluded by calling on Americans to vote Trump out of office in the general election as a way of protecting the nation from further damage to its public health response.

"Americans must put a president in the White House come January, 2021, who will understand that public health should not be guided by partisan politics," the editorial reads.

"The Lancet isn't playing. They want Trump out," wrote physician Barry Schapiro. "His anti-science, anti-intellectual, fantastical thinking that there's a magic bullet or a miracle cure has crippled our response. There is good science behind pandemic response and it's been ignored."