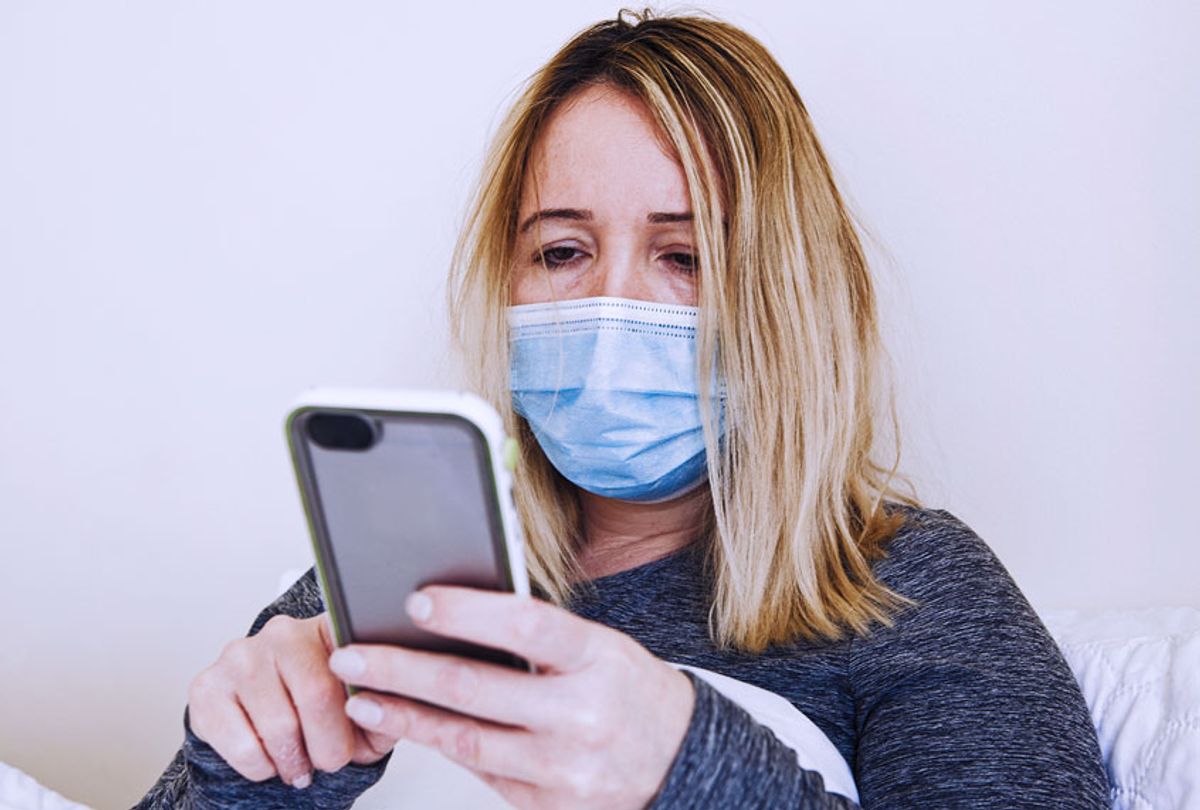 Woman coughing and suffering in medical mask inside the home bedroom, searching for her symptoms on her phone (Getty Images)
--

A new study from Australia reveals that medical students and members of the general public who use online symptom checkers (SCs), meaning "algorithm-based programs that provide potential diagnoses and triage advice," will wind up with inaccurate or misleading information about important health questions the majority of the time.

Online symptom checkers — essentially the technocracy's attempt to replace doctors with digital tools — let users input symptoms and see a list of possible diagnoses. Some symptom checkers exist in the form of smartphone apps, others as websites.

"The [symptom checkers] we evaluated provided correct first diagnoses in 36% of cases and appropriate triage advice in 49%," Michelle G. Hill, Moira Sim and Brennen Mills wrote in a recent article for "The Medical Journal of Australia," adding that "overseas SCs may not provide advice relevant to users in Australia."

The authors explained that part of the problem with relying on symptom checkers is that the programs can be confused by the data input by users.

"The diagnostic accuracy of SCs is limited by their programming and how information is presented," the authors explained. As an example, they looked into how one might search for heart attacks. "The core signs and symptoms in the 'heart attack' vignette are chest pain, sweating, and breathlessness," they note. The American Association of Retired Persons' online symptom checker called Health Tools "found no 'possible causes' for this symptom combination, but suggested 51 diagnoses for the lone symptom 'chest pain', with 'heart attack' listed second."

"That is, diagnostic usefulness was reduced by increasing the number of symptoms entered, although the tool prompts users to enter multiple symptoms," they conclude.

The authors also noted that "health and computer literacy could affect how people use SCs, and this can pose challenges for patient–physician relationships if the SC advice contradicts that of the physician." SCs that provide symptom directories can also provide skewed diagnoses as a result.

"Diagnosis is not a single assessment, but rather a process requiring knowledge, experience, clinical examination and testing, and the passage of time, impossible to replicate in a single online interaction," the authors explained.

The authors argued that "if symptom checkers are seen as a replacement for seeing a physician, they are likely an inferior alternative" since "it is believed that physicians have a diagnostic accuracy rate of 85-90%, though in some studies using clinical vignettes, performance was lower." They noted, however, that "patients are likely not using symptom checkers to obtain a definitive diagnosis but for quick and accessible guidance." With that in mind, they also observed that "if symptom checkers are seen as an alternative for simply entering symptoms into an online search engine such as Google, then symptom checkers are likely a superior alternative. A recent study found that when typing acute symptoms that would require urgent medical attention into search engines to identify symptom-related web sites, advice to seek emergent care was present only 64% of the time."

There have been other studies examining the impact of the internet on ordinary patients seeking health information. One prevalent concern is that patients will be unable to distinguish between misinformation and legitimate scientific findings. Another is that people may believe that they can avoid seeing a doctor by doing research online, even though online medical research is always best supplemented by a professional medical opinion.

Sharon Swee-Lin Tan and Nadee Goonawardene wrote in a 2017 article in Journal of Medical Internet Research that "patients' positive attitude toward physicians did not change unless physicians imposed restrictions on their online information sharing during consultations. . . . Patients still valued consultations with physicians, and their trust in physicians remained very high." In other words, take those symptom checkers with a grain of salt and call your doctor later.