In exchange over bailouts, Warren accuses Mnuchin of putting "Wall Street buddies" before US workers 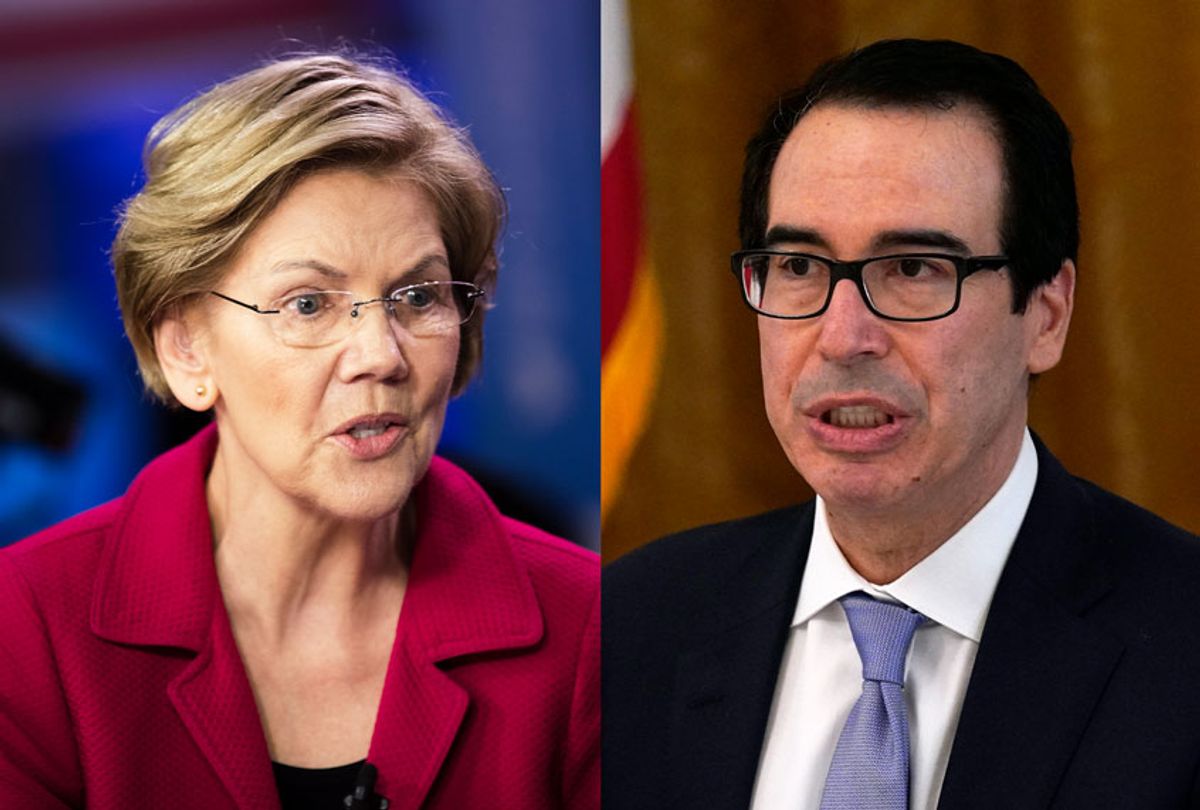 Sen. Elizabeth Warren on Tuesday accused Treasury Secretary Steve Mnuchin of looking out for his friends on Wall Street instead of U.S. workers after the former Goldman Sachs banker repeatedly refused to say whether he would require companies that receive coronavirus bailout funds to keep their employees on payroll.

The Massachusetts Democrat pointed out during a virtual Senate Banking Committee hearing that the CARES Act—which President Donald Trump signed into law in March—gives Mnuchin and the Federal Reserve broad authority to determine what, if any, conditions are attached to taxpayer bailouts.

When Mnuchin said that the CARES Act airline bailout program contained "very specific requirements to keep jobs," Warren replied, "That's right, and the rest was left up to you, and what you're saying is that you won't do it."

"We're in a situation where 35 million Americans have filed for unemployment," Warren continued. "You're in charge of nearly half a trillion dollars. You're boosting your Wall Street buddies and you are leaving the American people behind."

David Dayen, executive editor at The American Prospect, tweeted that Warren's exchange with Mnuchin "was the only one in this Senate Banking hearing so far that got to the heart of the matter."

"There is essentially nothing in the Fed money cannon term sheets that stops a company from taking bailout money and firing workers," Dayen wrote. "That's the bottom line. Giant companies with ready access to a menu of multi-trillion-dollar programs have no restrictions on using the money to support workers. We're bailing out capital, investors, and executives. That's it... Workers bear all the risk. Period."

"We will review that," Mnuchin said.

In a letter (pdf) sent Monday to Mnuchin, Fed chairman Jerome Powell, and Federal Reserve Bank of New York president John Williams, Warren said she is "disappointed that you have not established strong requirements for [bailout] programs to ensure that taxpayer dollars are used wisely and in support of workers and the economy as a whole."

"You must ensure that—unlike in the wake of the 2008 financial crisis—companies that rip off taxpayers and the executives that run them are not let off the hook with minimal fines, no criminal liability, and no requirements that they even admit guilt," Warren wrote.