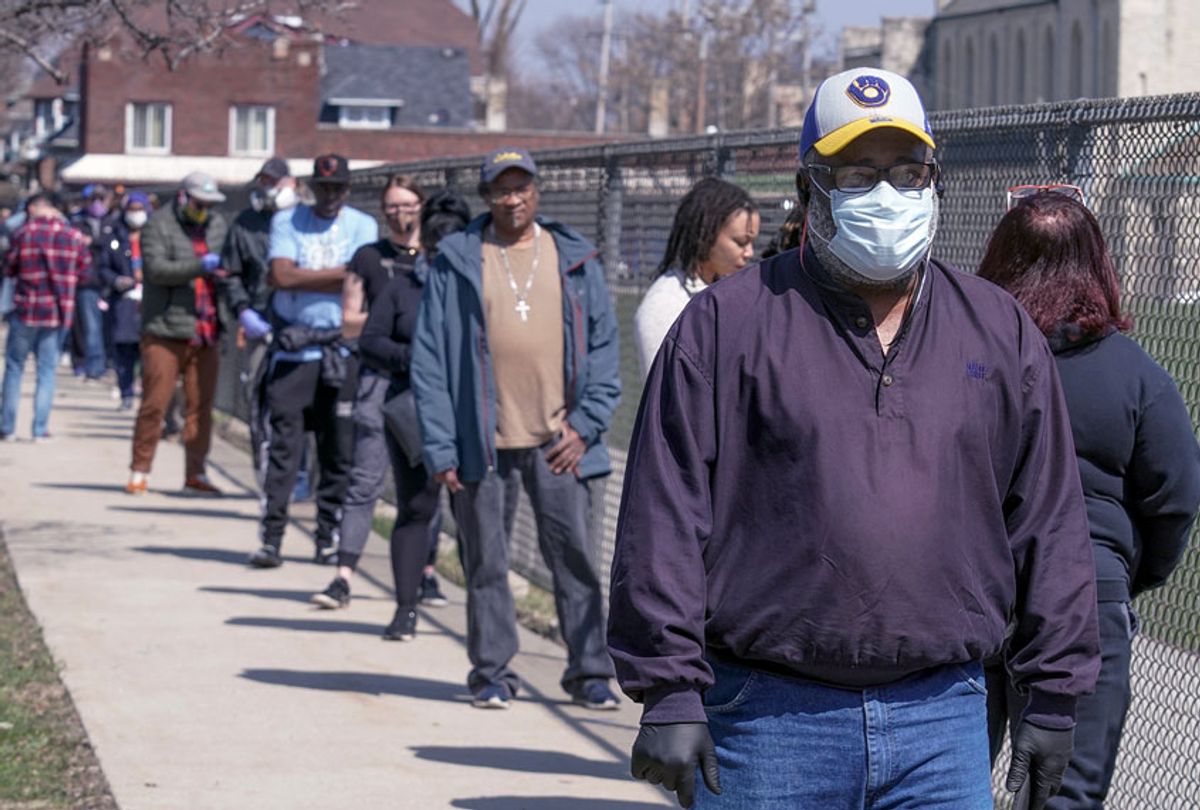 In this April 7, 2020 photo, voters observe social distancing guidelines as they wait in line to cast ballots in the presidential primary election in Milwaukee. (AP Photo/Morry Gash)
--

A new study has linked in-person voting in the controversial election Wisconsin held last month amid the ongoing coronavirus pandemic to an increase in COVID-19 cases.

Researchers at the University of Wisconsin and Ball State University found a "significant association between in-person voting and the spread of COVID-19 two to three weeks" after the election. Those findings were published by the National Bureau of Economic Research.

The state was forced to drastically cut polling places due to severe worker shortages, which "increased positive testing rates," the researchers said. "Wisconsin counties with higher levels of in-person voting per polling location led to increases in the weekly positive rate of COVID-19 tests. Furthermore, counties with higher absentee voting participation had lower rates of detecting COVID-19 two to three weeks after the election."

The study, which has not been peer-reviewed, is the first to find a direct link between in-person voting and a rise in COVID-19 cases. Epidemiologists previously said the election did not cause a spike but "warned that the effects may be hidden in the data and difficult to ever detect," The Milwaukee Journal-Sentinel reported. Contract tracing investigations have similarly been inconclusive.

The new study found that a 10% increase in voters per polling location corresponded with about a 17% higher rate in positive cases in the same county.

"The findings suggest it may be prudent for policymakers and election clerks to either expand the number of polling places dramatically — maybe with longer hours or more early voting times — to try to keep the population density as low as possible," researcher Chris Cotti, an economist at the University of Wisconsin-Oshkosh, told the outlet. "Or just to have more mail-in options, as well."

"We tried to account for as many factors as we could, and tried to be responsible with our analysis," he added. "There's strong evidence of a good relationship here."

But Nasia Safdar, an infectious disease expert at the University of Wisconsin-Madison, argued that the study could not rule out whether other possibilities had caused the increases.

"They did a pretty careful assessment of traffic during the period of interest, but these challenges remain with these kinds of studies," Safdar said. "It's association but not causation."

Republicans forced in-person voting in the election after they sued over an executive order issued by Gov. Tony Evers, a Democrat, which would have delayed the election until June. The executive order was issued after the Republican-led legislature refused to move to an all-mail election despite the threat posed by the pandemic.

Republicans have rejected claims that the election led to an increase in infections as they push back on Democratic efforts to move to voting by mail in upcoming races.

"If you look at Wisconsin, I've yet to see a spike or anything that anybody has said was statistically significant related to the fact that they had voting," Rep. Chip Roy, R-Texas, argued earlier this month after the Wisconsin Health Department reported that at least 36 people were believed to have been infected as a result of voting in person.

The pushback comes as President Donald Trump continues to espouse a baseless conspiracy theory that mail-in voting is tied to voter fraud, a claim which has been repeatedly debunked. Trump threatened Wednesday to cut off federal funding to Michigan after it joined numerous other states in announcing that it would send absentee ballot applications to every voter.

"Utah, Oregon, Washington, Hawaii and Colorado, a mix of red, blue and purple states, currently conduct their elections entirely by mail, while 28 other states give voters the option to do so. Contrary to what some would like you to believe, voting by mail is neither partisan nor at risk for fraud," Rep. Joe Neguse, D-Colo., and Rep. Dean Phillips, D-Minn., said in a joint op-ed this week.

"Wisconsin's primary election a few weeks ago was deemed by the Milwaukee Journal Sentinel as 'The most undemocratic election in the state's history,'" they continued. "Which leaves us with two options: Do we want to be a nation that reduces the number of polling places and forces citizens to wait in long lines in early winter in the midst of a pandemic or one that makes voting safer, fairer and more accessible during a national health emergency?"

Steffanie Strathdee, an epidemiologist at the University of California - San Diego, agreed that the Wisconsin study further showed the need for mail-in elections.

"The public health implications are clear and follow common sense: in-person voting in the midst of a pandemic caused by a highly infectious pathogen is a terrible idea," she told Forbes. "Absentee voting should be the norm in such situations."