Trump's court jesters: Barr tries to protect his boss — is Graham shoving him off a cliff? 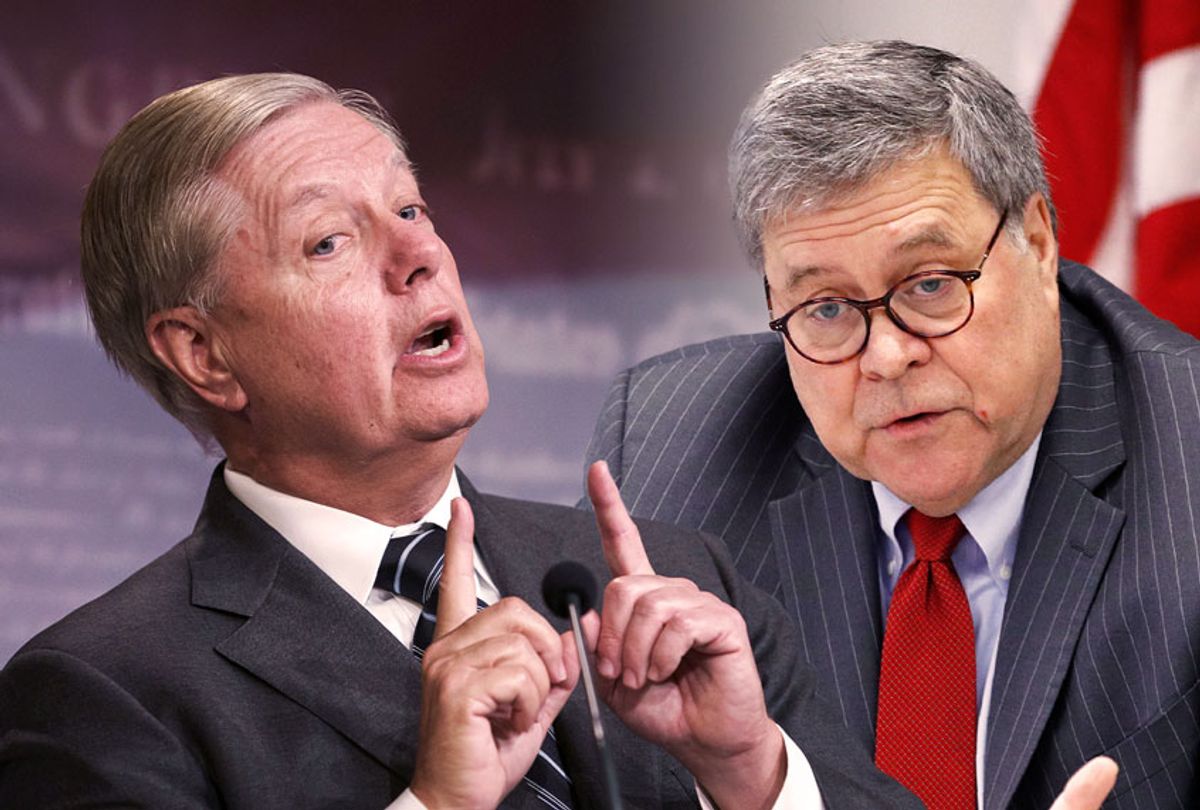 Earlier this week Attorney General Bill Barr held a press conference at the Justice Department, supposedly about a recent terrorism arrest in South Florida. But nobody cared about that and neither did Barr. He was there to talk about "Obamagate," and everyone knew it. Barr had an announcement to make about special counsel John Durham's "investigation of the investigation," meaning his attempt to blame the Russia investigation on a conspiracy within the Obama administration:

Now as to President Obama and Vice President Biden, whatever their level of involvement, based on the information I have today, I don't expect Mr. Durham's work will lead to a criminal investigation of either man. Our concern over potential criminality is focused on others.

Barr lugubriously explained his reasoning as a gentleman and man of principle:

I'm surprised he didn't salute and break into the "Battle Hymn of the Republic" after delivering that monologue. More than that, I'm surprised the press corps didn't break into hysterical laughter at the sheer absurdity of that sanctimonious drivel.

Just saying what he said about Obama and Biden the way he said it —"whatever their involvement" — is reminiscent of the way former FBI director James Comey announced that he wouldn't prosecute Hillary Clinton over the largely-invented email scandal and then went on to trash her as reckless and unethical. (Ironically, Comey may be one of the people Barr decides to indict on Durham's recommendation, which would prove once and for all that God has a sense of humor.)

Barr's grotesque mischaracterization of Robert Mueller's report back in March of 2019 was as hackishly political as a low-level partisan operative's PR stunt. The speeches he gives to friendly audiences of cops and religious institutions could have been written by any right-wing Republican demagogue running for office. His media appearances are brazenly tendentious. The fact that he has the nerve to say that "the criminal-justice system will not be used for partisan political ends" after he has gone to great lengths to let Trump's cronies off the hook is beyond parody.

No attorney general in history has been more shamelessly political than Bill Barr.

It's unlikely that Barr actually believes he is acting with integrity, but anything's possible. He seems to be steeped in the right-wing fever swamp. Nobody else in this world is so gullible as to believe that his "investigation of the investigators" is anything but retribution on behalf of Donald Trump. All you have to do is read Trump's Twitter feed to understand exactly what it's all about. Even the president's cult-like devotees don't pretend otherwise.

As Bob Cesca wrote in Salon on Tuesday, the whole "Obamagate" charade is mostly red meat for the MAGA crowd and an attempt to distract the public and the media from the tens of thousands of Americans who just won't stop dying from COVID-19 and ruining Trump's campaign schedule. But the Durham probe is real, and it's likely to cause a flurry when Durham announce whatever he's found, regardless of whether Obama and Biden are mentioned. Despite Barr's protestations to the contrary, he's happy to drop a carefully timed bomb into the presidential campaign.

Trump, on the other hand, was not happy at all when asked about Barr's comments:

Barr is doing Trump a favor. He knows there was no criminal behavior by Obama and Biden but he's framing his decision as a matter of higher principle — that being that the Department of Justice should never investigate a former president and vice president for alleged crimes committed while in office.

Personally, I think the odds of the Justice Department pursuing Trump's crimes under a President Biden or a President Anybody Else are exceedingly small. Unless something emerges that's even more heinous than what we already know, I feel fairly confident they'll just want to close the book on this chapter of history and "move on," unfortunately. There are always the state courts, which have plenty of criminal and civil material to work with. The lawsuits already wending their way through the courts, resulting from various grifts, acts of defamation and alleged sexual misconduct will have Trump tied up in legal knots for years.

That doesn't mean the Congress shouldn't do everything in its power to investigate this power grab by the executive, and look at anything that comes crawling out from under the rocks they turn over. Trump's incompetent and irresponsible pandemic response may require a full-fledged 9/11-style commission, and the political reforms necessary to repair our democracy will take years to formulate and execute. If Democrats manage to get a majority in both houses on Capitol Hill, they must not be allowed to shirk this duty no matter how dire the exigent circumstances may be. Because the country cannot survive another presidency like this one.

In that regard, Sen. Lindsey Graham of South Carolina, chair of the Senate Judiciary Committee and Trump's loyal lackey, may not be doing him any favors with his long-promised plan for a big show trial starting in June, pandemic or no pandemic. While Graham has said that the doesn't think Trump's demand that Obama be called to testify in person is wise, he apparently plans to bring in other big guns from the previous administration:

It should be quite the extravaganza.

It is unprecedented, in fact, for Congress to initiate such an investigation, and it remains to be seen how well this will work out for Trump and the Republicans. But the good news is that if Trump is defeated in November and the next Congress begins a multi-faceted, thorough investigation of all the Trump administration's malfeasance, corruption and unconstitutional behavior, Republicans won't have much grounds for complaint. They will have set the precedent, egged on by none other than Donald Trump himself. All the Democrats will have to do is wave his Twitter feed in their faces.