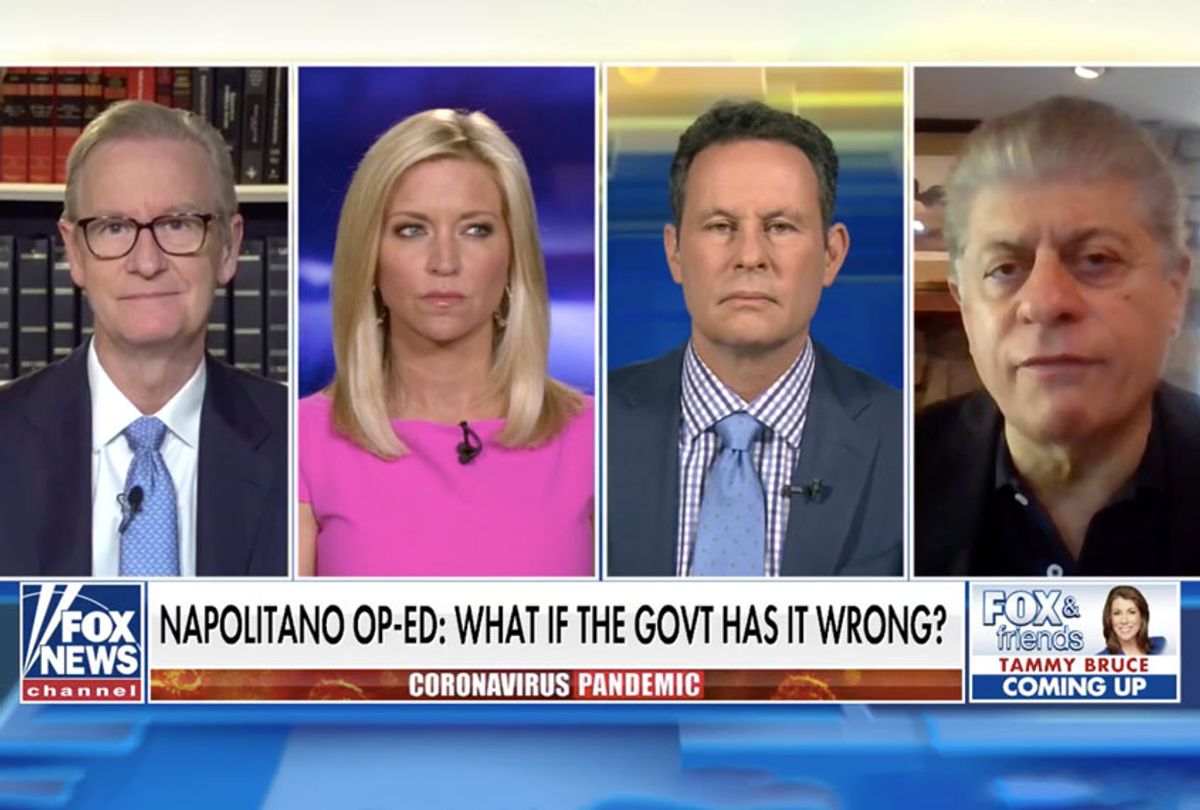 As "Fox & Friends" co-host Brian Kilmeade criticized New York Mayor Bill de Blasio's warning that the city might have to install fencing to keep people off of beaches over Memorial Day weekend, he made an unexpected admission: "Walls and fences don't work."

Kilmeade's remarks came in response to Judge Andrew Napolitano, who demanded that DeBlasio open the city lest New Yorkers take matters into their own hands.

"We have a mayor in New York that loves asserting power and controlling people — even to the point of sending police to disrupt religious orgs in the middle of the ceremony," Napolitano said. "This is not right, and it's got to end. Enough is enough."

The cast of "Fox & Friends" has vacillated over the years on the value of President Donald Trump's quixotic border wall project. At first, they suggested that he seek corporate sponsors.

During a discussion with Napolitano in 2019, the hosts parried Trump's proposal to pull funds from the Pentagon through a national emergency declaration, saying it was likely unconstitutional and would get tossed by the Supreme Court. Nine months later, the show — which critics have mocked as Trump's "real Cabinet" — defended that same plan.

Kilmeade on Thursday continued to mock DeBlasio, saying: "'But if you want to go to the beach — go to Long Island beaches, as if the problem is the New York City sand."

A number of Fox News personalities are currently broadcasting from their Long Island estates while the network's coronavirus stay-home policy is in effect, including Kilmeade's own co-host Ainsley Earhardt, who last month questioned Trump's plan to ban immigration during the pandemic because over concerns that it might impact her au pair.

However, Earhardt's mother recently recovered from a COVID-19 infection, the seriousness of which Kilmeade has snidely dismissed on the air — at Earhardt's expense — and specifically in the context of beachgoing.

"My mom is very sick," Earhardt said during an April 30 segment. "And as much as I want to go out, I still want everyone to play by the rules, because when I finally do get to go home to visit her . . ."

"But is your mom going to the beach?" Kilmeade interrupted.

"No, but Brian . . . Eventually she's going to be around family again," Earhardt replied, voice clipped. "I understand both sides — I really do — I just don't want a resurgence of this."

Kilmeade on Thursday would not let the issue go.

"It is nuts what's going on here and why people are just complying with it," he said. "They are calling for people just to massively open their business across the city. They can't stop everyone. Would you be against that?" he asked Napolitano.

That same morning, the cover of The New York Post, which like Fox News is also owned by the Murdoch family, called for the city to end the lockdown. "The Big Apple is dying," it read. Meghan McCain promptly shared the cover on her Instagram account.

"That gym owner down the shore — that very courageous guy Ian Smith is open, and his customers are using that gym and the police are saluting them as they walk in," Napolitano pointed out.

Police in Bellmawr, N.J., issued a third summons for Smith and his business partner on Wednesdy for disorderly conduct in violating state orders. Officers also cited gym members for violations as they walked in and even arrested one member when he refused to give his name.

"This is not just a point of principle. This is a reality that we are just not there yet as a public health matter," Democratic Gov. Phil Murphy said during a news conference Wednesday afternoon.

More than 20,000 people have died of COVID-19 in the city of New York, per official city data. More than 10,700 have died in New Jersey, according to official state data.

Napolitano did not immediately respond when reached for comment.