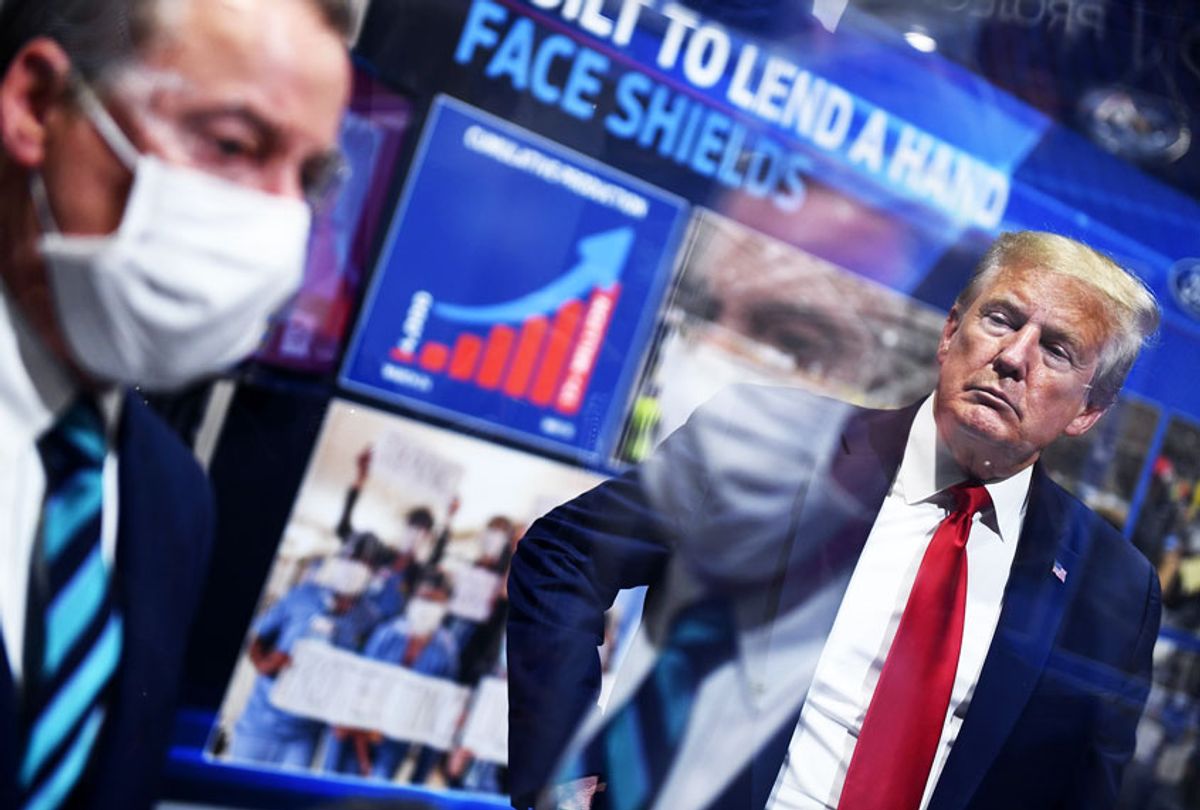 On Thursday, President Donald Trump toured a Michigan Ford Motor Co. factory that had pivoted to manufacturing ventilators and face shields over the last several weeks as the nation has been battling the spread of COVID-19. Amid much speculation, and true to his previous actions and those of his colleagues, the president did not wear a face mask — despite it being the law in the state of Michigan.

"It's disappointing, yet entirely predictable," Dana Nessel, the Michigan state attorney general, told Salon in an interview. "It's unfortunate it's such a small and easy and painless request to make; again, it's [the] law in our state, and it's just Donald Trump continuing to thumb his nose at the law even when it would allow for the safety and security of our state residents and his fellow Americans."

Nessel penned a letter to Trump on Wednesday, requesting that he wear a mask during the Thursday tour.

"While my Department will not act to prevent you from touring Ford's plant, I ask that while you are on tour you respect the great efforts of the men and women at Ford — and across this State — by wearing a facial covering," Nessel wrote in the letter. "It is not just the policy of Ford, by virtue of the Governor's Executive Orders."

The state of Michigan has been hit especially hard by the virus, with more than 50,000 confirmed cases and 5,000 deaths. On Wednesday, news surfaced that Ford temporarily stopped production at two assembly plants this week after employees tested positive for COVID-19, too. The closures occurred at plants in Dearborn, Mich., and Chicago.

Technically, Trump's visit violated Michigan law and could warrant a misdemeanor charge. Executive Order 2020-91 currently suspends all non-essential in-person visits to manufacturing facilities, including tours. But Nessel told Salon that Governor Gretchen Whitmer didn't want to enforce that because she did want to showcase the great work Ford employees have been doing to manufacture ventilators and face shields, which have been possible by paid volunteers of the The International Union, United Automobile, Aerospace and Agricultural Implement Workers of America (UAW).

Nessel said Trump's inability to abide by a simple request will affect him next time he visits Michigan.

"What I will probably think about doing in the future is not permitting that portion of the executive order to be waived on the President's behalf, since he can't abide by this very simple request made by both the Ford plant as well as by myself, and that [he] be asked not to return to our state in the event that he intends to tour any enclosed facilities," Nessel said. "If anyone invites him in, I'm going to have to have a serious discussion with whoever that entity is, wherever the owner or operator of such a building is, and potentially look at a MIOSHA [Michigan Occupational Safety and Health Administration] complaint, because it's an occupational health and safety violation."

After touring the plant, a reporter asked Trump if he wore a mask. He said he was "given a choice," and that he "had one on in an area where they preferred it." Trump pulled a navy blue mask out of his pocket, stamped with the President's seal, but wasn't photographed with one on and didn't put it on for the media.

"I didn't want to give the press the pleasure of seeing it," Trump said.

All the Ford executives and workers were wearing masks. One Ford worker even spoke about making face shields while wearing a face shield and mask.

Many critics have speculated as to the pathology of Trump's childlike oppositional behavior, as exhibited by his refusal to don a mask. "There's also good reason to believe that the Trump-Pence antipathy to wearing masks signals to something deeper and darker," Salon's Amanda Marcotte wrote. Marcotte continued:

Ultimately, the rejection of mask-wearing really goes back to the fact that Trump [and his] most faithful followers are guided by fascist impulse, even when they don't or can't articulate a fully fleshed-out fascist ideology. Above all other things, the fascist personality is one that rejects even the possibility of sickness. To wear a mask is to publicly admit that one's body is susceptible to illness, which is coded as "weak" and therefore unacceptable.

Natascha Strobl, an Austrian political scientist who is an expert in far-right organizing and rhetoric, had an important English-language Twitter thread in early April about why the far right was embracing the view that the coronavirus should simply be allowed to run wild. [. . . ] The fascist narrative, Strobl explained, is that "men aren't men anymore, but nervous, urban, overly intellectualized and (here it comes) sickly weaklings.

"Weakness is never worthy of protection and has to be cast out. This is fascism," she continues. The fascist believes that those viewed as "weak" have an obligation to die "without protest for the greater good" and that if "they don't do it, they are weak and the weak drag everyone else down and therefore must be done away with."

There is ample scientific and public health evidence that the simple act of wearing an inexpensive face covering has greatly reduced the coronavirus's spread. Yet face masks have become  politicized in the United States, and many on the far-right applaud refusal to wear one.

In Michigan, Nessel says she has anecdotally seen a connection between Trump's rhetoric — in which he has likened basic public health measures to tyranny — and the behavior of Michigan residents.

"He's sending a message all around the states — 'you don't need to comply with these measures' — which are put in place for one reason and one reason only, and that is to protect people's lives," Nessel said. "And it's really unfortunate, because by doing that he literally is going to be killing people in our state."

Nessel added: "But his message is as contagious as the virus, which is, 'you don't have to obey the governor's orders, and you have no obligation to keep others safe from harm.'"