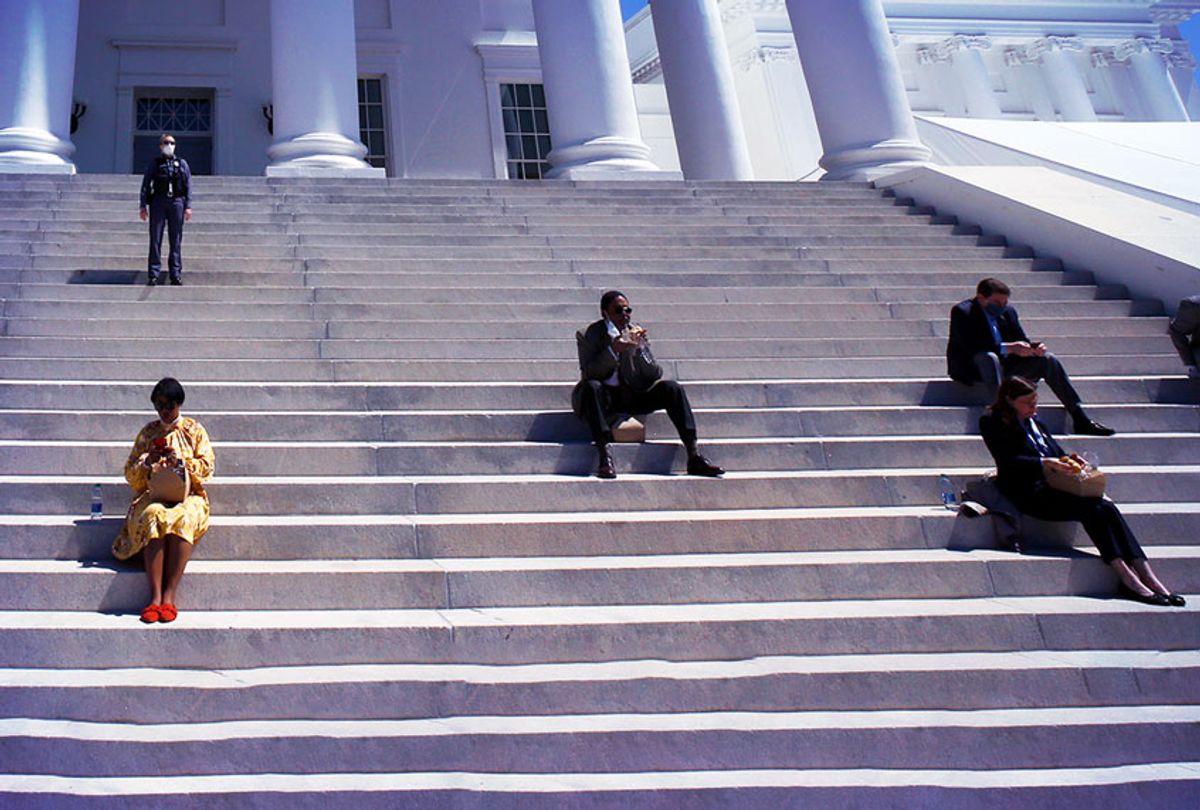 House of Delegates members eat boxed lunches at a social distance from one another on the steps of the Virginia State Capitol in Richmond, Va. (Bob Brown/Richmond Times-Dispatch via AP)
--

A new study reveals that government-enforced social distancing measures have succeeded in reducing the COVID-19 growth rate in the United States.

The journal Health Affairs published a study earlier this month, conducted by researchers from Georgia State University, the University of Kentucky and the University of Louisville, about the effectiveness of social distancing. Researchers observed the growth of COVID-19, the disease caused by the coronavirus, in counties across the United States between March 1, 2020 and April 27, 2020.

"Adoption of government-imposed social distancing measures reduced the daily growth rate by 5.4 percentage points after 1–5 days, 6.8 after 6–10 days, 8.2 after 11–15 days, and 9.1 after 16–20 days," the authors wrote. "Holding the amount of voluntary social distancing constant, these results imply 10 times greater spread by April 27 without [shelter-in-place orders] (10 million cases) and more than 35 times greater spread without any of the four measures (35 million)."

The "four measures" refers to large event bans, school closures, shelter-in-place orders, and closures of service and entertainment sector businesses. The researchers' bottom line is that the US prevented 35 million cases by putting these four measures into place.

The authors emphasized that the purpose of their study was not to establish whether isolation helps limit the spread of the coronavirus, which they acknowledged to be an undisputed fact. Their goal was to instead ascertain "whether the particular government restrictions designed to encourage social distancing in the US reduced spread relative to simply providing information and recommendations." The researchers noted that "individuals may voluntarily engage in avoidance behavior, such as hand washing or wearing masks, once they fully perceive the risks of contagion" and that some governments, like Sweden, have taken a hands-off approach toward enforcing social distancing.

This is not to say that all mandated social distancing measures were proved to be effective. The study found that shelter-in-place orders "lead to statistically significant reductions in the COVID-19 case growth rate." It similarly found that closing restaurant dining rooms and bars, gyms and various other entertainment centers resulted in "statistically significant" drops in COVID-19 cases. On the other hand, the authors also wrote that "we found no evidence that bans on large social gatherings influenced the growth rate," although they added that "the lack of evidence of an effect should not be misinterpreted as clear evidence of no effect." They likewise found that there was no evidence closing schools had any influence on the growth rate.

While more than 92,000 people have died in the United States so far due to the pandemic, many political leaders, particularly on the right, are skeptical of preventative measures. President Donald Trump's son Eric Trump recently cast doubt on social distancing strategies. On Saturday, Eric Trump told Fox News' Jeanine Pirro that Democrats are "trying to milk" the pandemic through social distancing policies in the hope that it will hurt Trump in the 2020 presidential election.

"They think they're taking away Donald Trump's greatest tool, which is being able to go into an arena and fill it with 50,000 people every single time," Trump told Pirro. "And you watch, they'll milk it every single day between now and Nov. 3. And guess what, after Nov. 3 coronavirus will magically, all of a sudden, go away and disappear and everybody will be able to reopen."

He also argued that former Vice President Joe Biden, the presumptive Democratic nominee, "loves this" because he is supposedly unable to draw similar crowds to his campaign events.