Joe Biden: "If you have a problem figuring out whether you’re for me or Trump, then you ain’t black"

"The comments made at the end of the Breakfast Club interview were in jest," Biden adviser Symone Sanders tweets 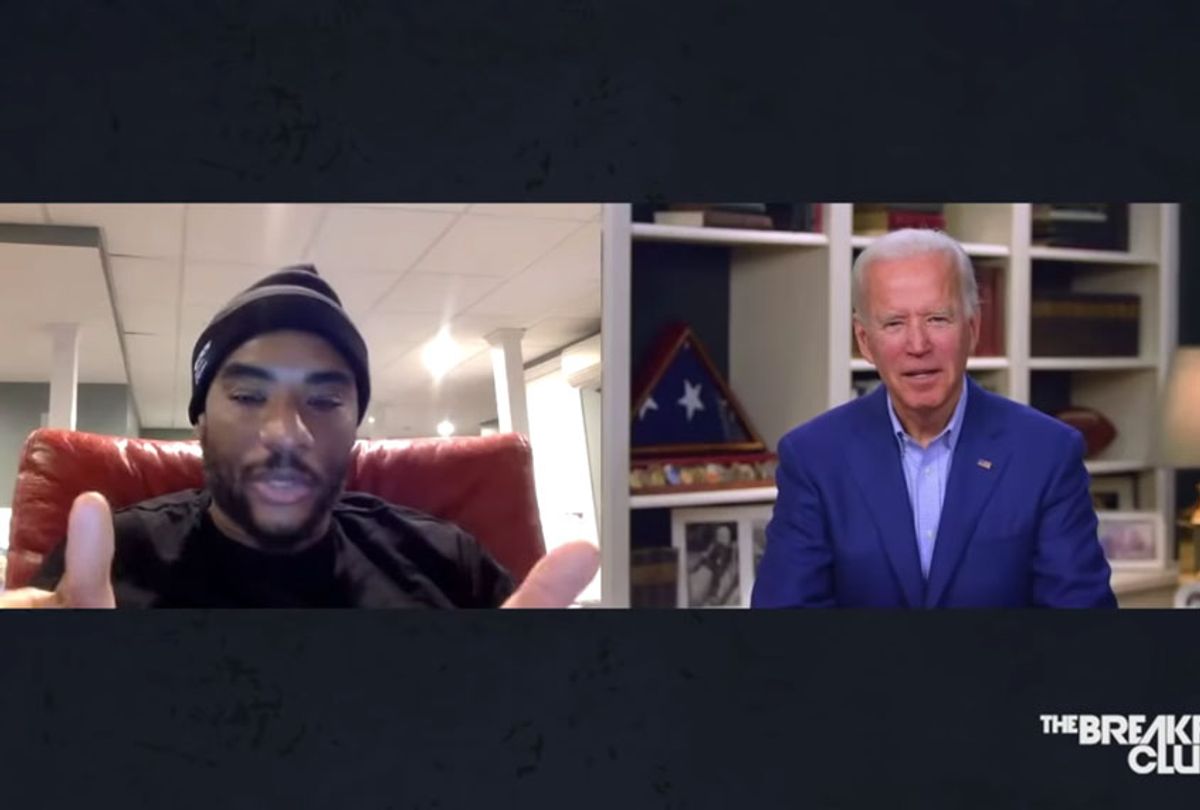 Presumptive Democratic nominee Joe Biden told a black radio host Friday that "if you have a problem figuring out whether you're for me or Trump, then you ain't black."

Biden tried to cut short a contentious interview on "The Breakfast Club," in which host Charlamagne tha God pressed him on his record on issues of race and the black female candidates on his vice-presidential shortlist after reports that Biden was vetting Sen. Amy Klobuchar, D-Minn.

An aide for the former vice president attempted to wrap the interview after the question.

"Thank you so much," the aide said. "That's really our time. I apologize."

"You can't do that to black media," Charlamagne responded.

"Listen, you've got to come see us when you come to New York, VP Biden," Charlamagne said. "It's a long way until November. We've got more questions."

"You've got more questions?" Biden asked. "Well, I tell you what, if you have a problem figuring out whether you're for me or Trump, then you ain't black."

The host explained that it "don't have nothing to do with Trump. It has to do with the fact [that] I want something for my community."

"Take a look at my record, man. I extended the Voting Rights [Act] 25 years. I have a record that is second to none," Biden replied. "The NAACP's endorsed me every time I've run. I mean, come on. Take a look at the record."

Earlier in the interview, Biden defended authoring the 1994 crime bill, which Charlamagne argued was "damaging to the black community."

"What happened was — it wasn't the crime bill," Biden insisted. "It was the drug legislation. It was the institution of mandatory minimums."

Biden also said he believes that "no one should go to jail for a drug crime." At the same time, Biden said he supported decriminalizing marijuana rather than legalizing it.

"I know a lot of weed smokers," he added.

Biden's remarks drew swift criticism from Republicans, including Donald Trump Jr., who called them both "racist" and "dehumanizing."

"This morning, Joe Biden told every single one of us we 'ain't black,'" Sen. Tim Scott, R-S.C., the only black Republican in the Senate, wrote on Twitter. "I'd say I'm surprised, but it's sadly par for the course for Democrats to take the black community for granted and brow beat those that don't agree."

Campaign aides to Trump, who has espoused racist rhetoric for years, seized on the comment.

"It is clear now more than ever, following these racist and dehumanizing remarks, that Joe Biden believes Black men and women are incapable of being independent or free thinking," Trump campaign adviser Katrina Pierson, who is black, tweeted. "He truly believes that he, a 77-year-old white man, should dictate how Black people should behave."

"The comments made at the end of the Breakfast Club interview were in jest, but let's be clear about what the VP was saying: he was making the distinction that he would put his record with the African American community up against Trump's any day," she wrote. "Period."