Everyone knows Trump is a racist, so why can't the media say it? 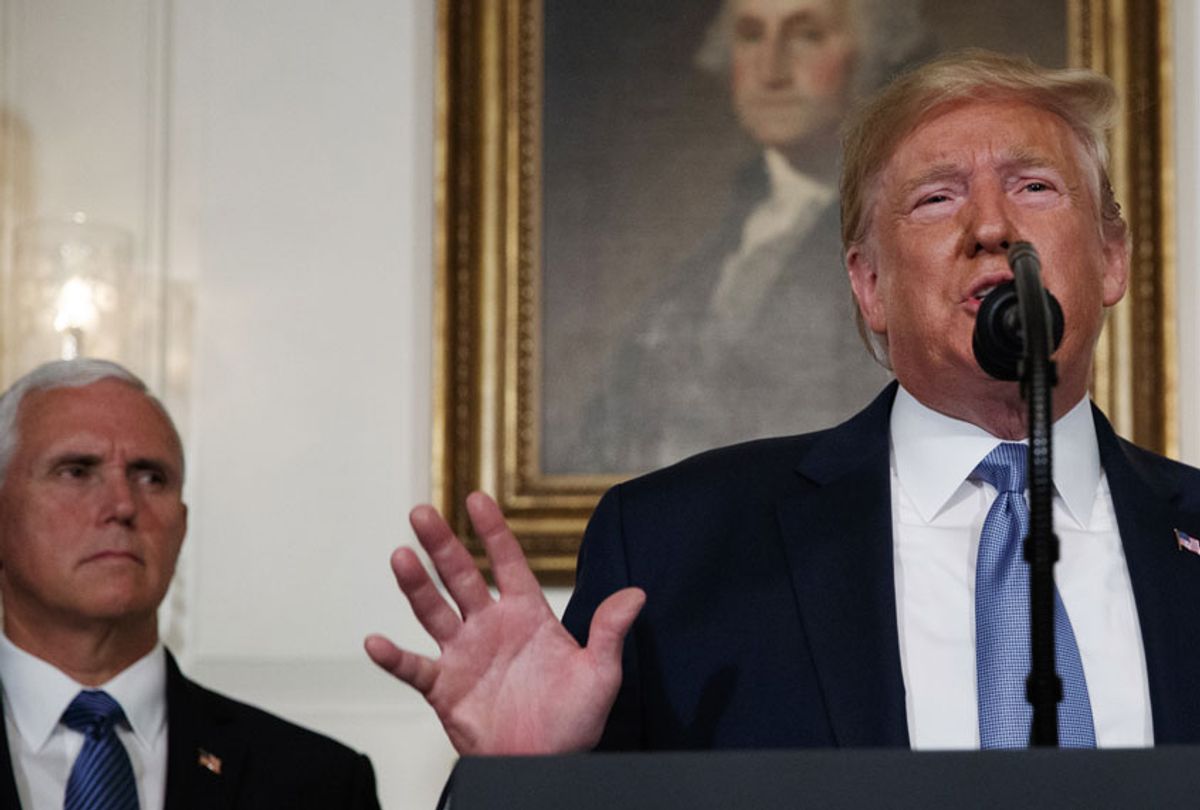 President Donald Trump speaks about the mass shootings in El Paso, Texas and Dayton, Ohio, in the Diplomatic Reception Room of the White House, Monday, Aug. 5, 2019, in Washington. (AP/Evan Vucci)
--

No one actually believes Donald Trump opposes racism. Not his critics. Not his supporters. Not anyone who tries to live in the zone of "objectivity." Trump's racism is a immoveable fact of life, like gravity or the sun.

And yet, somehow, the media continues to struggle to accurately convey to American audiences this reality, which is that when Trump, a racist and a liar, says anti-racist things, he's just a racist who is currently lying.

This problem was illustrated Monday, when the New York Times previewed a headline about Trump's response to two recent mass shootings that read, "Trump Urges Unity Vs. Racism", causing an explosion of outrage in response, and causing the newspaper of record to scramble, changing it to "Assailing Hate But Not Guns" in the second print edition and the much more accurate "Shootings Spur Debate on Extremism and Guns, With Trump on Defense" for the online edition.

The furor illustrated a truly difficult struggle for media outlets in the Trump era, which is how to cover Trump statements that everyone knows are lies, but which cannot technically be proven to be false.

This is a classic example. On one hand, it's technically true that Trump gave a speech Monday in which he did mouth the words "our nation must condemn racism, bigotry and white supremacy". It is also true is that his statement was as believable as if he said, "While many English translations of Proust's 'À la recherche du temps perdu' are beautifully wrought, I myself prefer to read the classic novel in the original French."

It's not just that Trump used body language and a sullen tone of voice — at one point even confusing Dayton, where one shooting happened, with Toledo — in order to clearly communicate how little he believed his own words and how reluctant he was to speak them. It's just that we all know how these things go, after two and a half years of going through this process again and again, most recently last month when Trump's half-hearted denunciations of racist chants at a rally were immediately followed by a lengthy public tantrum in which he made it clear that he was actually on the chanters' sides.

He always follows up anti-racist statements with public tantrums that expose how he really feels. We know this, because it's been his pattern since the 2017 Charlottesville riots, when Trump lashed out in petulant fury over having been asked to condemn a white supremacist murder, and, lying, tried to argue it was "the left" that was "violently attacking the other group."

Trump was already at it on Twitter Tuesday morning, exploding in anger at former president Barack Obama for releasing a statement urging Americans to "soundly reject language coming out of the mouths of any of our leaders that feeds a climate of fear and hatred or normalizes racist sentiments." The statement didn't refer to Trump by name, but by ranting on Twitter, Trump made it quite clear that he takes personal affront when racism is being condemned.

Fox News also made it quite clear that when they hear the word "racist," Trump is the man that comes to mind. After reading Obama's statement denouncing "leaders who demonize those who don’t look like us," Fox News host Brian Kilmeade said, "I guess he’s talking about President Trump," and co-host Steve Doocy cracked, "You think?"

So that's one way Trump is unifying the country: Everyone appears to be on the same page when it comes to believing there's no way Trump means it when says racism is bad, m'kay? The actual disagreement is not whether Trump is a racist but whether it's a bad thing that the president is a racist, with many of his cheerleaders obviously landing on the terrifying side of "it's not."

And yet journalists and editors keep falling for it, time and again, running headlines or directly quoting Trump saying nice, conciliatory things without indicating to audiences that there is absolutely no way Trump means it. It's tempting to get paranoid about this, imagining that the reason is journalists are secretly in the tank for Trump and are treating his gaslighting as if it were good faith in order to help him.

The likelier story, in most cases, is that the traditions of journalism leave media sources ill-equipped to deal with Trump. Journalism lives and dies by the quote, and by the assumption that there's a strong correlation between the words people say and the message they are trying to communicate. Someone like Trump, who frequently says things that are not only lies but are meant to be understood as lies, breaks a system that is built on the assumption that most people say what they hope you believe they mean.

After all, it wasn't just the New York Times. CBS, NBC, ABC, and the Washington Post all ran headlines saying Trump condemned racism without noting that he didn't really mean it. Even Salon, which takes a strongly critical stance against Trump, struggles with this issue, running headlines that summarize what Trump said while failing to note that what Trump said was not matched by what Trump was actually communicating.

Why does Trump say anti-racist things that we all know he doesn't mean and that he will be soon walking back in some manner?  While I can't get into his head, I'm guessing the strategy, shaped by obnoxious trolls like Trump advisor Stephen Miller, is about sowing chaos and making it impossible to have anything resembling a coherent discourse at all.

And the reason to sow confusion and create distractions, of course, is that what Trump is doing is indefensible and he and his supporters know it. No one can mount a coherent, plainly stated case defending Trump's habit of stoking white nationalist sentiment that inspires domestic terrorism. Instead, Trump and his supporters toss out a bunch of lies, gaslighting, contradictory statements and distractions, forcing the public discourse into a muddled mess, so that Trump can keep doing what he's doing without anyone actually having to handle the impossible task of actually defending his indefensible actions.

It is the media's job to cut through the lies and confusion and report on the truth. But how to do that is legitimately difficult, since the old strategy of simply quoting people and assuming they mean to be believed is not working. Nor is it particularly helpful to introduce these nuances in the text of articles, as it's well-understood that most people only read the headlines and not the copy.

One exception that points the way for other outlets was the CNN headline that read, "Trump condemns 'racist hate' and white supremacy but does not acknowledge his own rhetoric."

A bit lengthy, but at least there was an attempt to provide context showing that Trump's anti-racist statement contradicts the majority of his rhetoric. Something tighter could read like, "Trump contradicts past racism in sullen speech" or something similar that puts the focus not on the half-hearted statement no one takes seriously,  but where it belongs, which is on Trump's heartier and clearly more sincere statements in support of racism.

The challenge of our era is not minor. The president of the United States regularly communicates that he is a racist who supports white nationalist ideologies, and that message is being heard loud and clear, even on those occasions when his mouth is saying other words. That is the truth the media needs to convey, especially now as the death toll from white nationalism is rising, both as the result of hate crimes and from the inhumane practice of packing migrants into hellish detainment centers that are clearly meant to punish them for daring to apply legally for asylum.