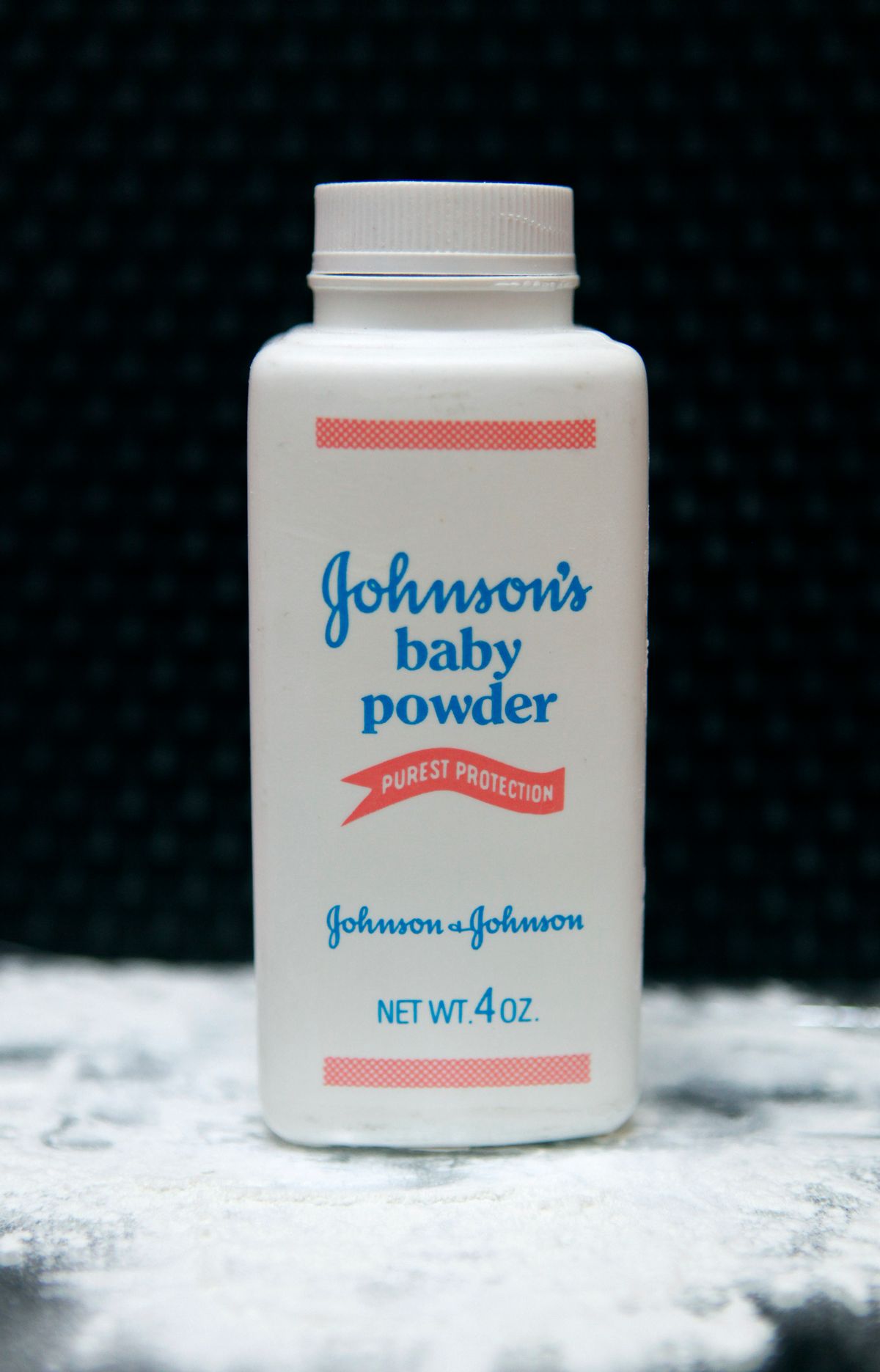 FILE - In this April 15, 2011 file photo, a bottle of Johnson's baby powder is displayed in San Francisco. A St. Louis jury on Thursday, Oct. 27, 2016, awarded a California woman more than $70 million in her lawsuit alleging that years of using Johnson & Johnson's baby powder caused her cancer, the latest case raising concerns about the health ramifications of extended talcum powder use. (AP Photo/Jeff Chiu, File) (AP)
--

Johnson & Johnson announced that it will halt North American sales of its talc-based Johnson's Baby Powder, a product that for decades evoked images of cherubic infants and adoring moms, but in recent years has dragged the company into a quagmire of expensive litigation.

J&J faces about 19,400 personal injury and wrongful death claims relating to its talc body powders, according the company's latest quarterly report, and the number of cases is growing. The lawsuits claim that Johnson's Baby Powder and a second talc-based powder were contaminated by traces of asbestos, that the company failed to warn about the danger, and that users contracted cancer through repeated, long time use.

The health care products giant also faces several investigations, including by the Justice Department, about whether it lied to the public about the risks of cancer from talc powders.

But in yesterday's announcement, J&J said it remained ''steadfastly confident'' about the safety of Johnson's Baby Powder, and would continue to ''vigorously defend'' the lawsuits. It attributed the move to falling sales of talc powder due to ''changes in consumer habits'', and "misinformation around the safety of the product and a constant barrage of litigation advertising.''

The company said that a cornstarch-based version of Johnson's Baby Powder will still be available in the U.S. and Canada, and that it will continue to market both types of the powder–talc and cornstarch-based—in markets overseas.

The announcement served as an early birthday gift for Deane Berg, an ovarian cancer survivor who turned 63 today, and whose pioneering lawsuit against J&J helped open the door to the flood of claims.

"I am just really thrilled,'' Berg told FairWarning, adding that it was "wonderful news that, at least, they're taking if off the market.''

Tried in 2013 in federal district court in South Dakota, Berg's case produced a mystifying split verdict— with jurors finding that J&J was negligent for failing to warn of the cancer risk, but awarding zero damages to Berg. The jury foreperson later told FairWarning that J&J should have issued warnings but that jurors weren't convinced that Berg's cancer was caused by talc powders.

Yet the case brought a slow-building controversy to a head. Plaintiff lawyers, heartened by a liability finding in arch-conservative South Dakota, have since brought thousands of additional claims. And the focus has shifted from the alleged dangers of talc itself to claims of contamination by traces of asbestos.

Talc, the softest known mineral, has a wide range of uses in cosmetic, pharmaceutical and food products, but talc deposits are sometimes interlaced with naturally-occurring asbestos.

Most of the talc cases have been brought in state courts in Missouri, California, and J&J's home state of New Jersey. The vast majority were filed on behalf of ovarian cancer sufferers who claimed they contracted the disease from perineal use of talc powders—sprinkling it into their underwear to prevent chafing and for feminine hygiene. Other cases, brought by victims of mesothelioma, a deadly, asbestos-related cancer, assert that they contracted the disease by inhaling asbestos fibers that became airborne when they sprinkled on the powder. Along with Johnson's Baby Powder, the lawsuits cite the use of another talc-based powder, Shower to Shower, which J&J sold to another company in 2012 and no longer contains talc.

Trial results have been mixed; some cases have produced eye-popping jury awards, though J&J has had some success in reversing losses through appeals. In the most closely watched case, J&J is seeking to reverse a St. Louis jury's July, 2018, award of $4.69 billion in compensatory and punitive damages to 22 women who blamed their ovarian cancers on use of talc powders.

J&J has consistently denied that its talc ever contained asbestos, and has blamed findings of trace levels of contamination on lab errors, including such things as analysts mistaking microscopic mineral particles for asbestos when they were really something else.

But an investigation by FairWarning in January, 2018, based on thousands of pages of internal documents, legal transcripts and records obtained under the Freedom of Information Act, showed that company officials had long been fearful about the risk of asbestos traces in their talc supplies and finished powders, even as they worked hard to convince the U.S. Food and Drug Administration that there was nothing to worry about.

In one hand-written document in 1973, a company official posed this theoretical question: If Johnson's Baby Powder contained asbestos at a concentration of 1 percent, how much of the cancer-causing substance might a baby inhale when dusted with the powder?

Last October, the FDA announced a voluntary recall of 33,000 bottles of Johnson's Baby Powder after tests found traces of chrysotile fibers, a type of asbestos, in one sample. Soon after, J&J said that a ''comprehensive investigation'' had affirmed that the powder was actually asbestos-free. It attributed the asbestos finding to a mistake by the contract lab that performed the test.

Responding yesterday to the J&J announcement, Ted Meadows, an attorney with Beasley Allen, an Alabama firm representing many ovarian cancer plaintiffs, said in a prepared statement: "By removing Johnson's Baby Powder from the market, J&J did today what they should have done decades ago. Now J&J should accept responsibility for the thousands of women who are suffering or who have died as a result of ovarian cancer caused by their talcum powder products."

But Meadows said it was ''troubling'' that J&J planned to continue selling the talc-based powder in other countries. "It is unfortunate that women and families in other countries will continue to face the devastating diagnosis of ovarian cancer because J&J refuses to take the same action without juries to force much-needed responsibility."

The Environmental Working Group, a nonprofit advocacy group, described J&J's move as ''long overdue.'' But it noted in a statement that many cosmetics brands continue to use talc in body and facial powders that can be inhaled, and called on manufacturers to end the use of talc in loose powders.