Lt. Gov. Dan Patrick laughs at Texans fear to vote in person during a pandemic

Texas is locked in a legal battle over whether it must expand voting by mail. 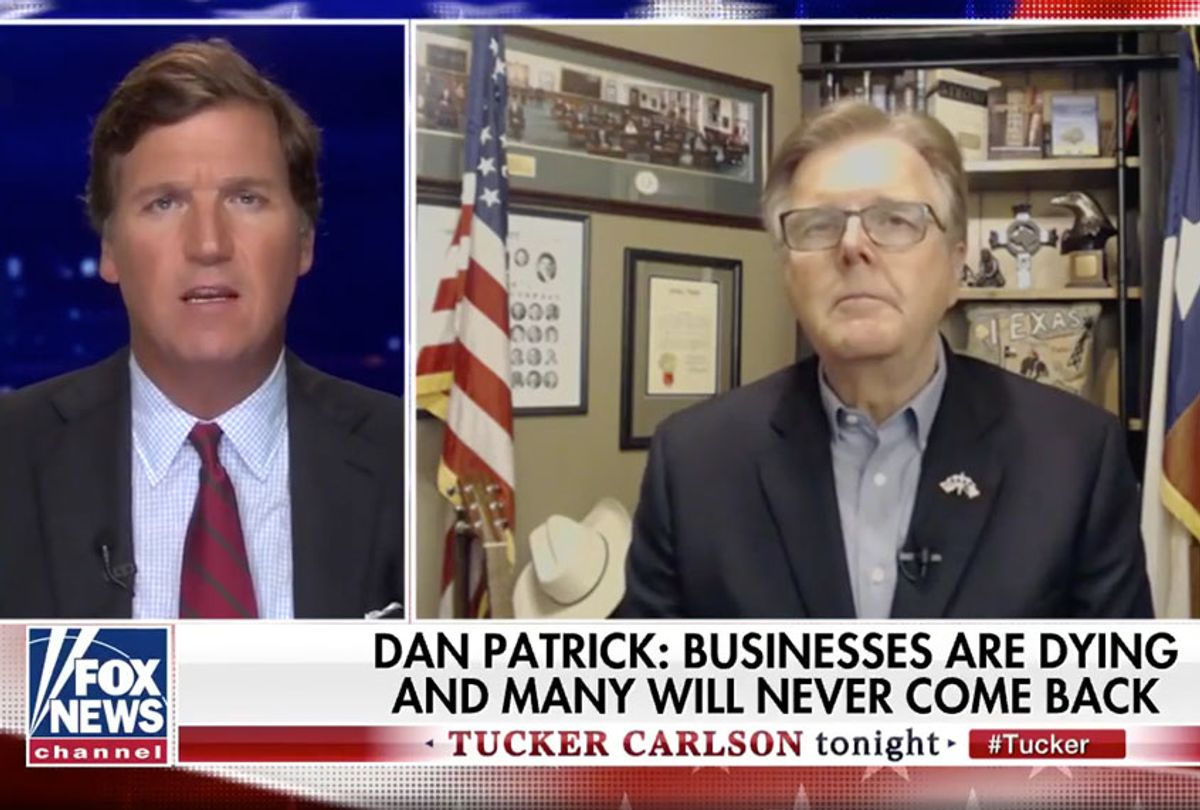 Lt. Gov. Dan Patrick said Friday that efforts to expand mail-in voting during the coronavirus amount to a "scam by Democrats to steal the election" and claimed that people under 65 are at more risk of dying in a car wreck on the way to vote than they are from dying from the new coronavirus because they voted in person.

Texas has been locked in a legal fight over whether it has to expand who is eligible to vote by mail during the coronavirus pandemic. Democrats and multiple voters have sued the state, saying it's dangerous to require people to wait in line and cast ballots on machines shared with other voters while the virus is spreading. GOP state officials have opposed the effort, however, saying that mail-in voting is vulnerable to fraud.

Patrick repeated those worries about fraud Friday while also dismissing any fears people might have about going to the polls if they aren't eligible for a mail-in ballot. Patrick noted that the vast majority of people dying from the virus are older. Currently in Texas, anyone 65 or older or with a disability is eligible for a ballot.

Texas does not have complete data for the ages of the 1,440 people who have died in the state from the virus. But the state has completed fatality investigations for 489 of those deaths, and about 29% of those were people confirmed to be under 65.

His comments drew immediate pushback from Democrats on Friday.

"If Dan Patrick says it, it's almost certainly wrong," said Abhi Rahman, a state party spokesperson. "Only in Patrick's la la world is voting a scam and grandparents should die for the economy. Voting by mail is safe, secure, and accessible. Dan Patrick sees the boogeyman in bathrooms, voting booths, and under his bed."

A federal judge on Tuesday ordered to allow anyone who seeks "to vote by mail to avoid transmission of the virus" to do so. But an appeals court put the ruling temporarily on hold a day later. In a separate case pending before the Texas Supreme Court, multiple medical professionals said in a court filing that the nature of voting in person — including standing in line, interactions with others in close proximity and "communal touching" of voting equipment — would facilitate a "heightened danger" for transmission of the coronavirus.

The doctors and nurses who signed on to the brief also argued that planned sanitation measures like wiping down surfaces at polling places wouldn't be enough to protect voters from a virus that's most commonly transmitted through respiratory droplets that can hang in the air for several minutes.

Patrick warned that "this will be the end of America if we allow [a mail-in voting expansion] to happen." He said fraud related to mail-in voting can "swing the balance easily" in an election.

"There will be Democrat activists going out there to find people and say, 'Hey, by the way, you got your ballot. Pay you 10 bucks. Can I handle it for you? This will destroy America if we allow it to happen," Patrick said.