"Now is a great time to be building a pipeline… you can't have protests of more than 15 people," said Sonya Savage 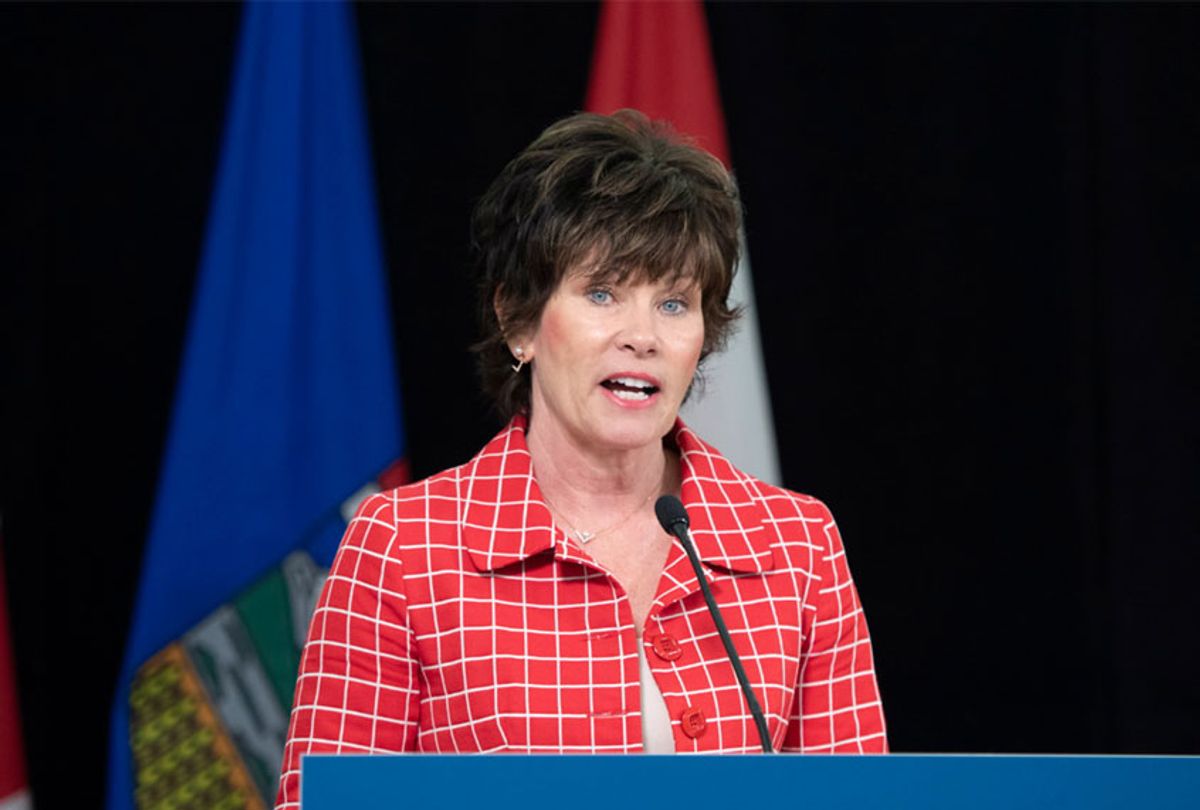 Sonya Savage, the energy minister for the Canadian province of Alberta, said during a podcast hosted by the Canadian Association of Oilwell Drilling Contractors that controversial oil pipelines should be built now because it is more difficult for protesters to assemble en masse during the coronavirus pandemic.

Speaking of the Trans Mountain Expansion project, which is currently being built as a pipeline from the Canadian cities of Edmonton and Vancouver, Savage said, "Now is a great time to be building a pipeline because you can't have protests of more than 15 people. Let's get it built." She later added, "people are not going to have tolerance and patience for protests that get in the way of people working."

Nancy Goroff, a scientist and former chair of the Chemistry Department at Stony Brook University who is running for Congress as a Democrat in New York's 1st district, condemned Savage's remarks.

"Using a pandemic to promote the fossil fuel industry is a reprehensible decision, taking advantage of a public health crisis to push an agenda that harms people and the environment," Goroff told Salon in a written statement. "As a scientist, I know we have a unique opportunity to invest in green energy as we reimagine our economy. Instead of this wasteful, cynical spending, we must invest in the infrastructure and research to develop renewable energy, clean vehicles, and clean buildings."

She added, "In my research lab, and as Chair of the Chemistry Department at Stony Brook University, I have seen how government investment can lead to great advances in science and technology, exactly what we need to combat the threat of climate change. Now more than ever, we need scientists in public office to ensure this crisis isn't used to advance dangerous policies, like building the Keystone XL Pipeline."

Climate change activist Greta Thunberg also condemned Savage's statement, posting on Facebook that "well, at least we are seeing some honesty for once... Unfortunately this how large parts of the world are run."

Savage's comments come as former Vice President Joe Biden, the presumptive Democratic presidential nominee, announced that he will oppose allowing the Keystone XL pipeline to cross the border into the United States.

"Biden strongly opposed the Keystone pipeline in the last administration, stood alongside President Obama and Secretary Kerry to reject it in 2015, and will proudly stand in the Roosevelt Room again as President and stop it for good by rescinding the Keystone XL pipeline permit," Biden campaign policy director Stef Feldman told Politico in a written statement.

A number of oil business leaders in Alberta condemned the Biden campaign's position.

"It's political posturing and unfortunately, it's predictable," Calgary Construction Association president Bill Black told the Journal of Commerce, a western Canadian publication. "It's a sad reflection of how polarized the world has become. One extreme gets in and does the opposite of what the other extreme did for the past four years."

Edmonton Construction Association president John McNicoll warned that his organization would be "justifiably angry" if Biden was elected and followed through on his promise about the Keystone XL pipeline. Ben Brunnen, vice-president, oil sands and fiscal and economic policy with the Canadian Association of Petroleum Producers (CAPP), said that the pipeline is "a critical component in our long-term economic recovery that will generate tens of thousands of much-needed jobs and billions of dollars in government revenues."