The nation is in crisis. Our president is busy calling women "skanks" and floating false murder theories 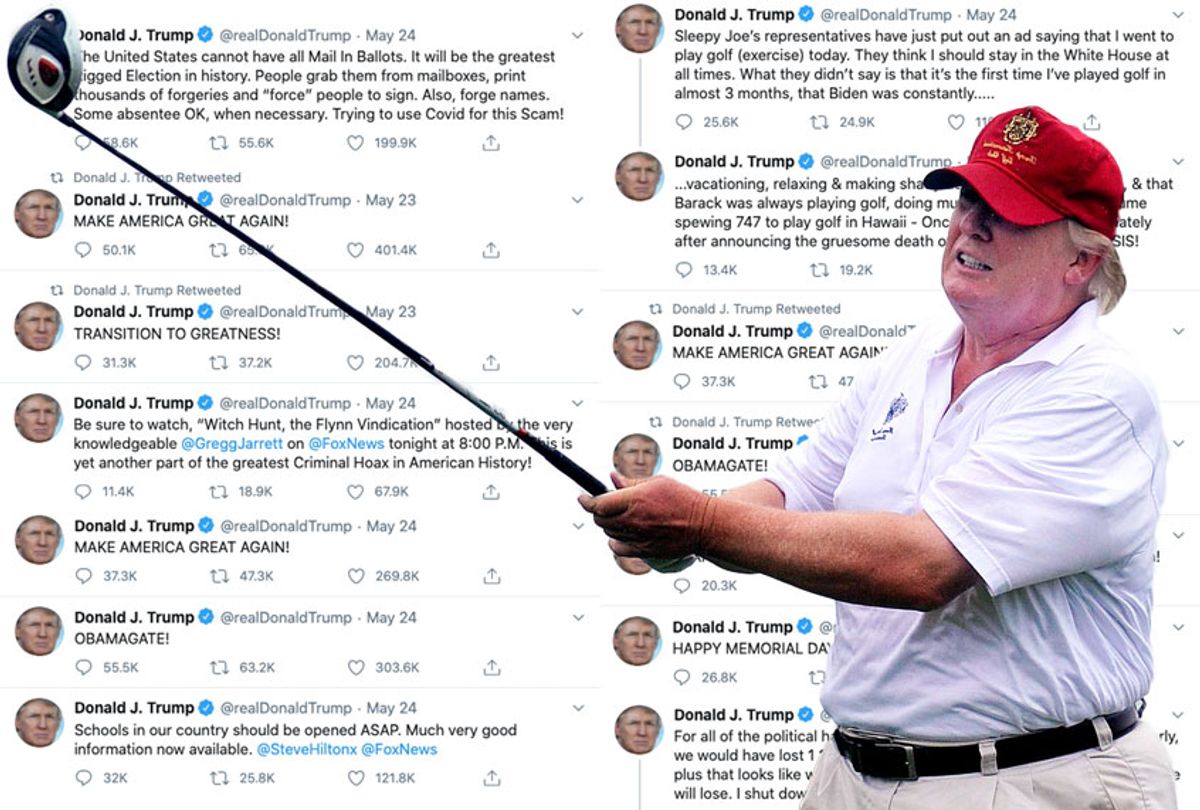 Memorial Day weekend will likely be remembered by history as one marked by unimaginable tragedy. The official count of people dead from COVID-19 approached 100,000 — a milestone that will surely be passd on Tuesday or Wednesday — and the actual death toll is likely much higher. The weekend kicked off with new reports of soaring unemployment, putting the number of Americans who have filed benefit claims at 38.6 million, nearly one of every four workers in the United States.

Donald Trump, who currently occupies the White House despite losing the 2016 popular vote to Hillary Clinton by nearly 3 million, could not care less about all this suffering among the people he is purportedly there to serve. We know this, because he spent his weekend ranting on Twitter about pretty much anything — including obviously false conspiracy theories about MSNBC host Joe Scarborough — except the crisis he prefers to pretend isn't happening at all.

What's equally upsetting is the soul-deadening knowledge that Trump's voters, who could well hand him another electoral victory even in the face of a near-certain popular vote defeat, also don't appear to care about his sociopathic behavior. On the contrary, many of them seem to relish the fact that Trump continues to "trigger the liberals," even as the nation falls apart around him.

Over the weekend, Trump, who isn't exactly svelte himself, retweeted a conservative pundit mocking rising Democratic star Stacey Abrams for her weight. Trump also retweeted the same man calling Hillary Clinton a "skank" and claiming that House Speaker Nancy Pelosi is ugly. Sexualized harassment of women, of course, is easy to psychoanalyze away with the entirely correct assertion that pathetic men try to cover for their own inadequacies. Trump is the supposed president of the United States, however, which puts the lie to long-standing but always untrue claims that ignoring such harassment robs it of its power.

Trump also spent the weekend using the power of his office to falsely accuse Scarborough of murdering a congressional staffer who worked for him when he was a Republican congressman in 2001. Lori Klausutis, in reality, died in an accident in Scarborough's Florida office, while he was in Washington. But for weeks now, Trump has falsely suggested her death is being investigated as a "cold case," suggesting that "Psycho Joe" murdered her instead.

Over the weekend, as the COVID-19 death toll soared and unemployment continued to rise, Trump doubled down on his effort to pump this defamatory accusation into the nation's bloodstream, claiming there are "unanswered questions" about the case (there are not) and calling on law enforcement to harass Scarborough over this.

Twitter, which no doubt profits handsomely from the traffic generated by people gawking at the shameful display that Trump provides on its platform every day, responded with statement expressing that the company were "deeply sorry about the pain these statements" had caused. Not sorry enough, of course, to delete them, or ban the biggest troll on their platform.

Beyond blatant misogyny and making false accusations of murder, Trump also lied about the coronavirus, claiming "numbers and deaths are going down all over the Country!" (Outside of New York City, they are, at best, plateauing.) He got into an elaborate BS rationalization for why it's was OK for him to play golf during a crisis when he publicly shamed Barack Obama for doing the same thing during non-crisis periods. (Real answer: Because golf, in Trump's mind, is for white people.) Trump also congratulated himself for "Great reviews" of his COVID-19 response, as if this were a reality TV show instead of just, you know, reality. (Also, while most world leaders are seeing a bump in their approval ratings, Trump's disapproval ratings are going up, which happens when you suggest injecting bleach into people's lungs rather than doing something real to combat the virus.)

The cliché at this point would be to say that we've all become numb to this. The president of the United States is defaming people, unloading misogynist abuse, lying in his bragging, and focused on litigating the Calvinball rules that only allow white presidents to play golf — all while Americans are dying, hospitals are in distress and unemployment is at or near 25%. Yet, this reality barely causes a response beyond a shrug.

But it's not that we're numb, not exactly. The majority of Americans, seeing this behavior, I suspect, still feel disgust, fear and anger. The muted response, however, is a product of learned helplessness. We could express our anger, but what good will it do?

Trump's supporters, who are disproportionately empowered due to gerrymandering and the Electoral College, don't care that their big hero is an empathy-free monster who is more worried about who-gets-to-play-golf quarrels than he is about the collapse of the country. The numbers bear this out. Nothing — not even Trump going on TV and suggesting that doctors are too stupid to have considered simply injecting disinfectants into human bodies — will budge Trump's approval ratings below the 41 to 43% that he has surfed on from the first day of his presidency.

Trump could go on TV and kick a puppy to death and his supporters would react by yelling "Fake news!" and gloating about how he triggered those puppy-loving liberals. We know this because what he's doing now is worse than kicking a puppy to death. His actions are literally killing people and setting our economy up to fail even worse. He encouraged red-state governors to reopen their economies, with no indication that the coronavirus was under control. The result, as we saw over the weekend, was crowded public events and the likely rapid spread of infection. Meanwhile, the effect of so many unemployment and underemployment people isn't fully being felt yet, but Trump is already moving to deprive people of unemployment benefits that could keep our consumer economy from collapsing completely.

None of this appears to matter. All that matters to Trump voters is he triggers the liberals and upholds the racist values of their tribe. As long as he keeps that up, they will happily walk off a cliff with him. The rest of us aren't numb. We're just in a hellish holding pattern, waiting until November to see if our democracy is too broken to prevent this 41 to 43% of Americans from holding the rest of the country hostage to their evil man-child cult leader.

We're a country that has cancer, and we're just waiting to see if the chemo is going to work. It isn't numbness. It's depression.