Now that Trump has suggested we shoot up Lysol, can cable news stop airing this crap?

"I'm like a person who has a good," said the president of the United States, pointing to his head. Fact check: No 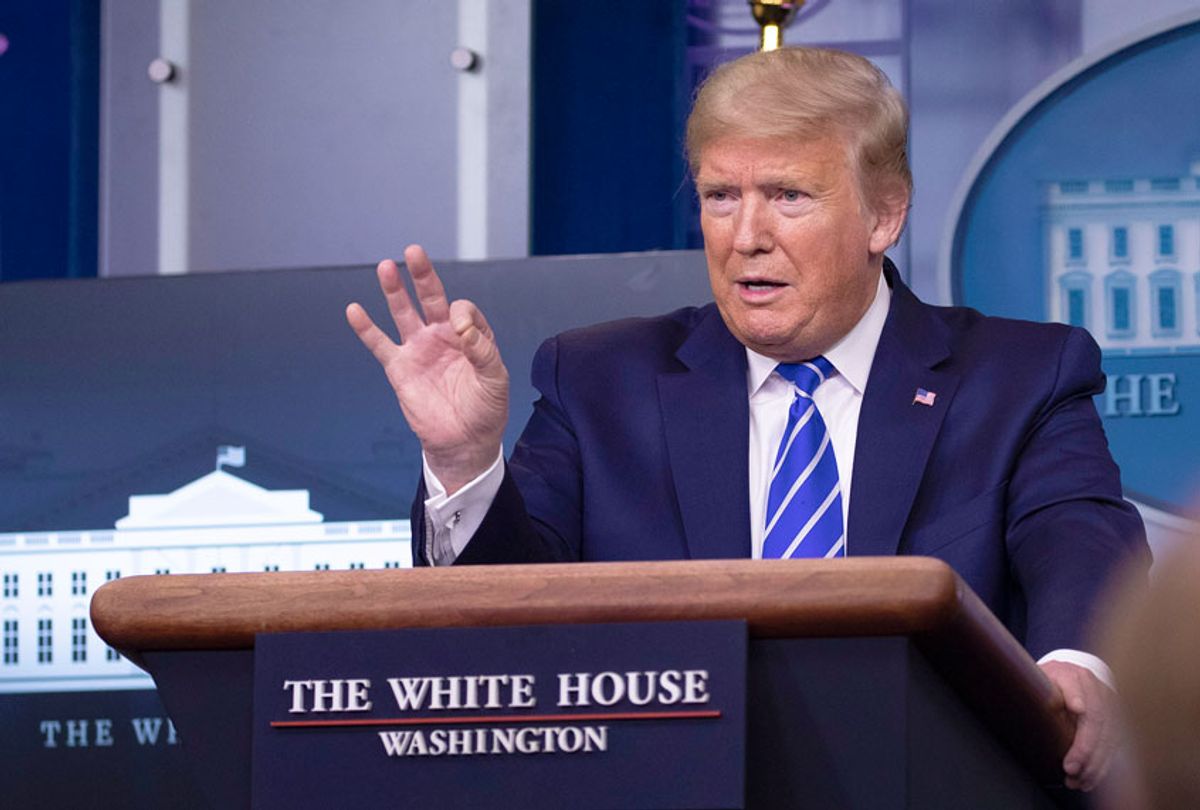 Moreover, in what may be the most narcissistic act in all of human history, he implied that the reason this hasn't been tried yet is because the entire medical establishment was not clever enough to think of it, and that only the mighty Doctor Trump has the genius brain to come up with such an idea.

"I see the disinfectant, where it knocks it out in a minute, one minute," Trump mused out loud during Thursday's daily propaganda blitz. He was discussing the fact that ordinary household disinfectants will kill the virus on countertops and other hard surfaces. "Is there a way we can do something like that by injection inside, or almost a cleaning, because, you see, it gets in the lungs, and it does a tremendous number on the lungs?

"I'm not a doctor," Trump added. "I'm like a person who has a good you-know-what," pointing to his head.

There has been a debate raging for a couple of weeks now over whether or not cable news networks should stop airing the live feeds of these daily rants disguised as press briefings. This moment, in a sane world, would end that debate.

By running his "briefings" unmediated every day, cable news is giving Trump the trappings of presidential authority that, in turn, create the illusion that he's an expert whose advice should be trusted. Those trappings are incredibly powerful, especially for the nearly 63 million people who voted for Trump and dearly don't want to believe they supported an imbecile who advises people to inject poisonous chemicals.

A week ago I asked whether it was responsible to carry Trump's nightly stream of consciousness on live TV.

Today, he suggested drinking or injecting disinfectants or "sunlight" to kill the virus.

So I will ask again: What value is there to this spectacle? https://t.co/S1ZgRhumxU

None of which is to say that journalists shouldn't cover these stories. Ideally, every American should be informed, before they make their voting decision in November, that Trump thinks injecting people with deadly chemicals might be a good idea. But airing or publishing news stories about this, where a reporter or columnist can make it quite clear that this is in fact a terrible idea is very different thing than simply airing Trump's dangerous galaxy-brain thoughts unmediated.

Trump also used his time on Thursday to speculate that sunshine or ultraviolet light could cure people of coronavirus disease, asking task force coordinator Dr. Deborah Birx to "speak to the medical doctors to see if there's any way that you can apply light and heat" to treat COVID-19. Birx, who is in fact a "medical doctor," looked pained.

The reason Trump is grabbing onto whatever asinine idea pings around inside his head is not mysterious. Public health experts have made it clear that the only thing that will actually solve this crisis is mass testing, but Trump doesn't want mass testing, because he thinks it's bad for his "numbers." (Especially now that there is evidence the virus reached the U.S. much earlier than we thought, and the real numbers are probably much larger than we know.) So instead he bounces around from one "miracle" solution to the next, desperate to come up with a reason we can just skip the mass testing strategy that could actually work.

This is a classic case of no good deed going unpunished. Trump's public musings about why he's smarter than those dumb doctors who haven't considered lung-bleaching or sunbathing to cure coronavirus apparently came in response to a presentation from DHS official William Bryan on research showing that heat, sunlight and disinfectants can slow or kill the coronavirus.

Bryan clearly meant that these things can kill the virus outside of the body. The self-proclaimed "very stable genius" half-listened to the presentation, saw the slide that Bryan had displayed to illustrate the advice and decided that he, and only he, was bright enough to see that surely this would work just as well inside the bodies of infected people, right?

"Supposing you brought the light inside the body, which you can do either through the skin or in some other way," Trump mused, adding, "I think a lot of people are gonna go outside all of a sudden."

It's tempting to believe that no one can be stupid enough to take Donald Trump's medical advice, but that would underestimate the deep emotional need of his voters to find some reason to justify their idiotic decision. Though the evidence so far anecdotal, plenty of people on social media are running with Trump's "advice," particularly telling themselves that they don't have to worry about coronavirus so long as they get their daily dose of sunlight.

"Dilbert" cartoonist and Trump cheerleader Scott Adams, for instance, got busy spinning this nonsense by arguing that only little-brains would believe Trump was talking about injecting disinfectant just because those were "his exact words." Instead, Adams spun a fairy tale in which Trump is a brilliant thinker who had read some obscure presentation about an experimental "far-UV light catheter technology," and only the big brains (like Adams) could see that's what Trump actually meant when he talked about injecting disinfectant.

Meanwhile, the MAGA-heads in everyday America didn't bother to go through this pretzel logic, and just ran with the idea that sitting in the sunshine makes you immune to coronavirus.

"My MAGA mom has already posted on her Facebook page that sunlight kills the virus and we should all go back to work as long as we go outside for walks," lamented one user on the Reddit politics forum. "Her MAGA friends have already posted all over it and blamed Bill Gates for hiding it from us."

"My sister immediately called me to tell me that it's OK to open Arizona because we have sun," another complained.

Perusing the Facebook comments on a CNN post that debunked Trump's "advice," as well as screenshots sent to Salon of pro-Trump chatter on Facebook, it seems clear that much of MAGA America likes the idea that their president has suddenly discovered this sunlight "cure" that evaded the actual doctors. One woman speculated that the reason Florida even has coronavirus cases is because it's too hot for people to go outside. Another said that the fact that people don't die from waterparks proves Trump is right. One man argued that Spanish flu victims in 1918 "miraculously recovered" when allowed outside. (This is not true.) And so on.

Mostly, these folks are just pretending they didn't hear the part about injecting Lysol, because even Trumpers struggle to rationalize that one.

Needless to say, Trump's problem is not that he's stumbling in his attempts to convey all the technical the information from all the scientific journals he's been reading. A New York Times article by Katie Rogers and Annie Karni published late on Thursday painted a more accurate picture of how Trump spends his time these days, and he doesn't seem to be educating himself about science.

Instead, Trump gets up around 5 a.m. (despite being up extremely late — he recently called acting chief of staff Mark Meadows at 3:19) and spends most of his morning watching TV and making cranky calls to random associates to complain about the negative coverage. He rolls into the Oval Office around noon, and skips any task force meetings or prep sessions before his daily "briefings." He only looks at the "day's main talking points that aides have prepared for him" right before he steps before the cameras and "hastily plows through them, usually in a monotone, in order to get to the question-and-answer bullying session with reporters that he relishes."

In other words, what happened on Thursday was exactly what it looked like: A man who thinks he knows everything but actually knows nothing, who only halfway absorbed a presentation about how disinfectant and sunlight can kill the virus. He used this tidbit of information to bullshit wildly, saying stuff that was painfully dumb and dangerous because he is too lazy and stupid to have learned that household cleaners are poisonous.

This is not a person who should be presented on TV with the trappings of authority. If cable news networks want to air the daily briefings live, then for the sake of their viewers' safety, they should cut away any time this "fucking moron" (in Rex Tillerson's immortal phrase) takes the microphone. The only people who should be live on CNN are actual public health officials. This isn't a game. People's lives are on the line.