GOP governors back masks, even as Trump mocks masked reporter as “politically correct” 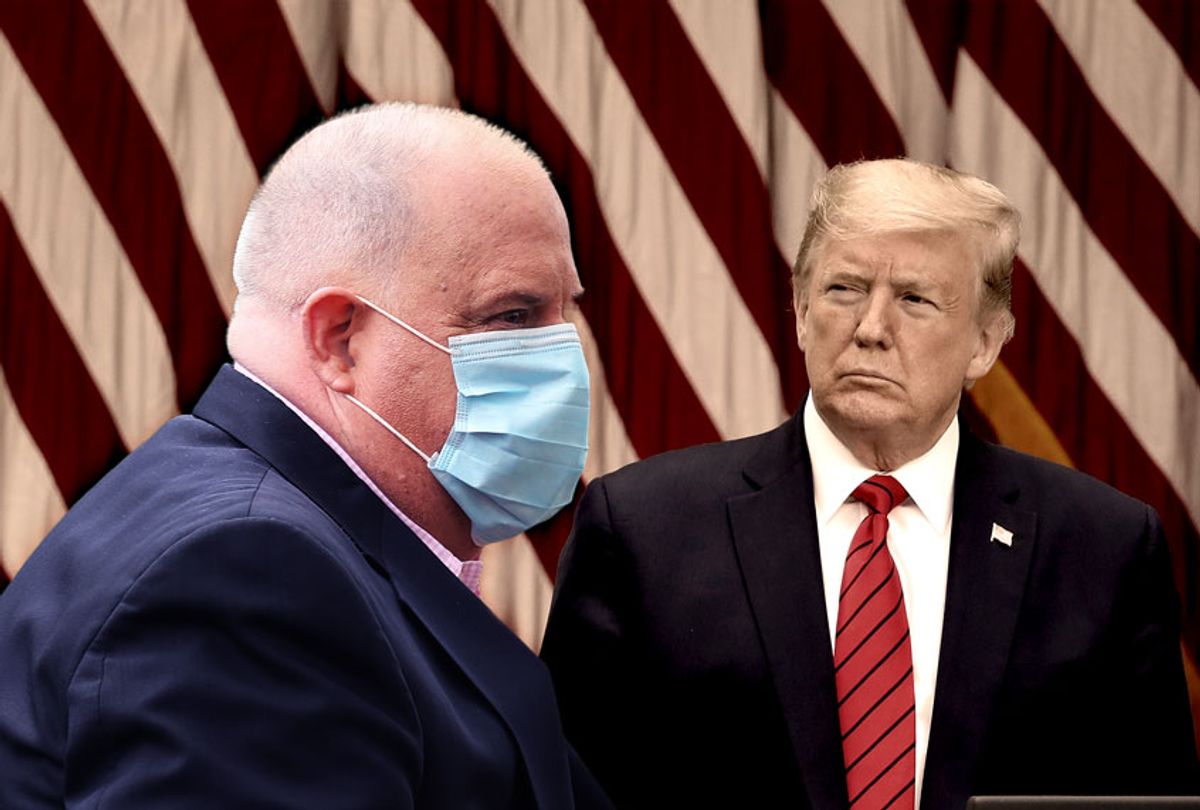 Multiple Republican governors issued pleas for residents to avoid politicizing face coverings as a measure to prevent the spread of the coronavirus, even as President Trump appeared to mock a reporter, as well as likely Democratic nominee Joe Biden, for wearing masks.

Though Trump has ostensibly endorsed the Centers for Disease Control and Prevention mask guidelines, he vowed that he was not "going to be doing it" and seemingly threw shade at Biden when the former vice president donned a mask to visit a veterans' memorial on Memorial Day.

On Tuesday, Trump criticized a reporter as "politically correct" when he refused to take off his mask to ask a question.

"He's a fool, an absolute fool to talk that way," Biden told CNN on Tuesday. "This macho stuff, for a guy ... I shouldn't get going. It's costing people's lives."

Trump's rhetoric appears to have had an effect on the public. The Kaiser Family Foundation found that 89% of Democrats wear a mask every time or most of the time they leave the home, compared to 58% of Republicans.

The partisan divide over masks has drawn concerns from some Republican governors, who urged the public not to politicize the face coverings.

DeWine said that he hopes 90% of the state's residents will wear a mask to contain the spread of the virus.

North Dakota Gov. Doug Burgum, also Republican, grew emotional at a recent briefing as he echoed DeWine's sentiment. Burgum choked up as he urged residents to dial down the attacks and "dial up your empathy and your understanding."

"If someone is wearing a mask, they're not doing it to represent what political party they're in or what candidates they support," he said. "They might be doing it because they've got a 5-year-old child who's been going through cancer treatments. They might have vulnerable adults in their life, who currently have COVID, and they're fighting."

"While this order is an important step in our immediate efforts to protect public health and safety, the wearing of masks is also something that we may all have to become more accustomed to in order to safely reopen our state," he explained in a news briefing.

Other Republican lawmakers have joined a growing chorus in urging the public to wear masks.

Senate Majority Leader Mitch McConnell, R-Ky., posted a photo of himself wearing a mask on Instagram on Tuesday. Sen. John Cornyn, R-Texas, the No. 2 Republican in the Senate, posted a similar photo on Monday.

"We all have to do our part. Maintain social distancing but if you can't, do this," Cornyn wrote. "Easy peasy. Go for it."

Even Fox News host Sean Hannity urged the public to wear masks on Tuesday because "we don't want it to spread to vulnerable people," in response to a viral video showing packed swimming pools over Memorial Day weekend at the Lake of the Ozarks in Missouri.

Nick Gourevitch, a Democratic pollster who helped author a memo urging lawmakers to publicly embrace masks, argued that the politicization was coming from inside the house.

"That is an issue that divides Republicans and not anybody else," he told The Washington Post.

Biden suggested that Trump was trying to be "falsely masculine" by refusing to wear a mask.

"Presidents are supposed to lead, not engage in folly and be falsely masculine," he said on Tuesday. "It reminds me of the guys I grew up with playing ball. They would walk around with a ball, but they didn't like to hit very much."