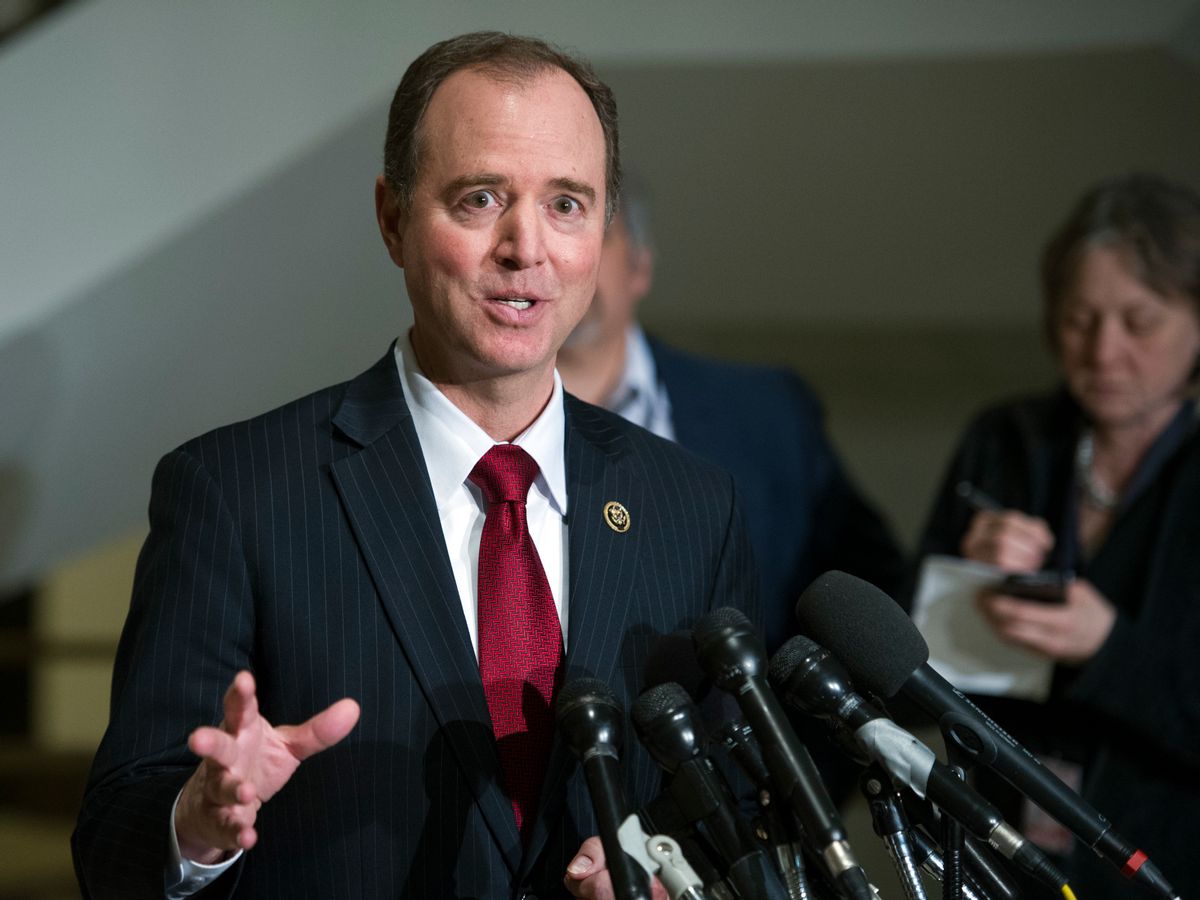 FILE - In this March 7, 2017 file photo, the House Intelligence Committee's ranking member Rep. Adam Schiff, D-Calif. speaks to reporters on Capitol Hill in Washington. As congressional investigations into Russia’s interference in the 2016 election are ramping up, so is the political division, raising questions about whether lawmakers' work will be viewed as credible. (AP Photo/Cliff Owen, File) (AP)
--

Internet privacy group Fight for the Future said Wednesday that House Intelligence Committee Chair Rep. Adam Schiff—who has called President Donald Trump a "clear and present danger" to democracy—"may be the biggest hypocrite in Congress" after the California Democrat threw a wrench into efforts to curb the Justice Department's powers to surveil U.S. web browsing records without a warrant.

Over the weekend, Schiff and Rep. Zoe Lofgren (D-Calif.) hammered out a deal on a compromise privacy amendment to the USA Freedom Reauthorization Act of 2020, a Senate-passed bill that would renew major elements of the FBI's surveillance authority. The amendment was originally welcomed by Sen. Ron Wyden (D-Ore.), a leading privacy advocate in Congress, as a solid safeguard against warrantless internet spying.

But Schiff on Tuesday instead advanced a narrower interpretation of the amendment in a statement to the New York Times just hours before the surveillance reauthorization bill was expected to hit the House floor for a vote.

Schiff's interpretation of the measure, according to the Times, "left open the possibility of interpreting the potential new law as banning only deliberate attempts to collect an American's data, leaving the FBI free to ask for lists of all visitors to websites despite the risk that the list may turn out to incidentally include some Americans."

The California Democrat's comments led Wyden to withdraw his support for the amendment and caused an uproar among privacy advocates, many of whom are publicly urging lawmakers to oppose the amendment and the surveillance bill as a whole.

"House Democrats had an opportunity to enact meaningful protections that would have kept people safe," Evan Greer, deputy director of Fight for the Future, said in a statement. "Instead they let Rep. Adam Schiff throw it all away at the last minute."

"Frankly, Schiff may be the biggest hypocrite in Congress," Greer added. "He constantly talks about how the Trump administration is dangerous and authoritarian. And he's right. But time and time again he has done everything in his power to ensure that the Trump administration has essentially limitless domestic surveillance authority that can be weaponized to target immigrants, activists, journalists, and religious minorities."

Fight for the Future urged the House to vote down the USA Freedom Reauthorization Act and "let the Patriot Act's domestic surveillance programs die permanently."

Progressive advocacy group Demand Progress is also urging the House to vote against the legislation unless it includes an amendment by Wyden and Sen. Steve Daines (R-Mont.) that would bar the FBI from surveilling internet browsing records without a warrant.

Daniel Schuman, policy director at Demand Progress, slammed Schiff on Twitter for inserting "Trojan horse language into an amendment to make it look like it makes the FBI get a warrant before obtaining your internet search history, but in reality imposes no such limit."

"Schiff is, unsurprisingly, the bad guy here. He forced an amendment to allow the targeting of immigrants and dreamers," tweeted Schuman, pointing out that the amendment would only protect American citizens from warrantless spying.

As of Wednesday afternoon, the surveillance bill is reportedly "on life support" in the House amid growing bipartisan opposition.

President Donald Trump, the Justice Department, and some House Republicans are also opposed to the bill—though for entirely different reasons than progressive privacy advocates. In a statement, Assistant Attorney General Stephen Boyd said Attorney General William Barr would recommend that Trump veto the legislation because of its limitations on the FBI's domestic surveillance powers.

Rep. Mark Pocan (D-Wis.) said Wednesday that the Congressional Progressive Caucus is also urging its members to vote no on the bill.

"Thank you to Mark Pocan and Rep. Pramila Jayapal for standing up for our rights and freedoms," tweeted Evan Weber, political director of the Sunrise Movement.