How restaurants are reopening safely, from transforming horse stalls to using disposible menus

Salon spoke to restaurant owners around the U.S. to learn their strategies to keeping staff & customers safe 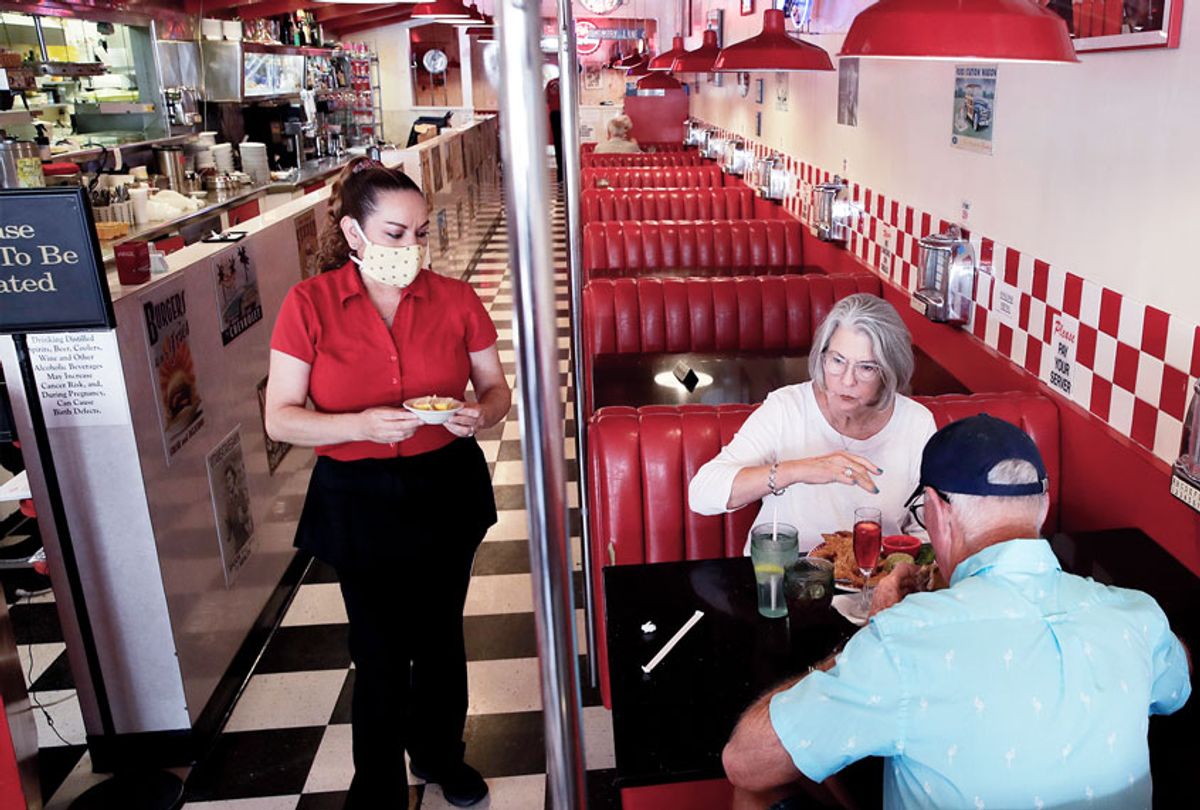 Lynn Tanner, center, and her husband Ryan, bottom right, are served lunch at Busy Bee Cafe Thursday, May 21, 2020, in Ventura, Calif. Much of the country remains unlikely to venture out to bars, restaurants, theaters or gyms anytime soon, despite state and local officials increasingly allowing businesses to reopen. (AP Photo/Marcio Jose Sanchez)
--

After the novel coronavirus was declared a global pandemic in early March, many states required restaurants to close their dining rooms or limit services as a way to contain the spread. Now after nearly two months, many restaurants are being allowed to gradually reopen.

The capacity to which they can reopen depends upon specific state, and sometimes county,  guidelines. Alaska restaurants, for instance, are now allowed to operate at 100% capacity (though reservations are recommended), while Indiana restaurants can open at 50% capacity.

In total, 41 states are allowing some level of dine-in service — while chefs in the remaining nine states are already contemplating reopening — but things are far from normal. From installing shower curtains around individual tables to setting up mannequins in unused dining room space, restaurant staff are having to adapt in unique ways to keep themselves and their guests safe, while also navigating the business challenges of the new dining landscape.

Salon spoke to owners to learn of the different ways that restaurants are adapting to in-person dining for a whole new era.

Lolo Manso, the chef and owner of Socarrat Paella Bar in New York City, has already started thinking about how he and his staff will have to adapt to the need for increased sanitation when the city opens for in-person dining again (perhaps in July, per Governor Andrew Cuomo's May 26 press conference).

Some of the measures are intuitive, like more strenuous and regular disinfection of tables, restrooms and common areas, and increased handwashing. Some large-scale chains, like Starbucks, are requiring employees to wash their hands every 30 minutes, an idea that is being implemented by independent restaurants, as well.

But according to Manso, he predicts that they will have to alter the way they do business in other fundamental ways.

"No more handshakes with guests, altering dining room layouts to increase the separation between guests, moving from re-usable menus to digital or disposable ones — to name a few," he said.

Many restaurants, like Kentucky's Barn8, are also assigning employees to serve as "sanitation attendants." According to Sallie Gardner of Estes Public Relations, which manages PR for Barn8, these attendants will have a number of responsibilities.

"They'll be cleaning bathrooms every 15 minutes," she wrote in an email. "Pure alcohol spray bottles will be stationed at the POS stand. Constant wipe down and sanitization throughout the restaurant is a priority."

Additionally staff at Barn8, a new restaurant located at the Hermitage Farms, have converted the historic property's original horse stalls into private dining rooms for guests as a way to maintain social distancing.

The restaurant, which was originally set to open in March, is now open at 33% capacity in accordance with Kentucky's state reopening guidelines. Currently, they can accommodate 69 diners indoors and 30 outdoors for service at a time. The staff have also set up a number of picnic tables around the property for take-out customers to eat their meals.

Many states, including Kentucky, allow restaurants to serve an unlimited number of patrons outside as long as social distancing recommendations are followed. So in effort to increase their profits, a lot of these restaurants are attempting to find ways to increase their number of outdoor seats — from tenting parking lots to investing in new patio sets.

In Cincinnati, Ohio, city officials have allowed the closure of some streets in the trendy Over the Rhine district to allow restaurants to expand their outdoor seating areas beyond the bounds of the sidewalk. According to the Cincinnati Enquirer, while only "eight bars and restaurants met all the criteria needed to seat people outside under the expanded program" last week, the Cincinnati Center City Development Corporation will ideally close 25 streets in total.

One of the things that restaurants are also having to plan for and navigate as they slowly reopen are staffing changes — less in-person customers mean less tips, leading to challenges in recruiting and retaining staff.

Lydia Chang is the chief of business development for Mama Chang in Fairfax, Va., and Q by Peter Chang in Bethesda, Md., says that they may have to consolidate staffing schedules and stations.

"For those who choose to return to work, they should see the same scale of tips based on business, which of course we can't predict," she said. "And as we have done in the past, we will supplement their tip allocation accordingly to make up if those goals aren't met. Servers may have to help with additional responsibilities not usually assigned to them such as bussing and running dishes."

Many restaurants are now requiring staff to submit a temperature check and health questionnaire before starting their shifts, as well as requesting they check customer temperatures before they enter the dining room.

One of these restaurants, according to the Associated Press, is Tony Gore's Smoky Mountain BBQ & Grill in Sevierville, Tenn.

"Everybody has really been great about that part of it," restaurant general manager Keith Carter said of the temperature checks. "We figured we would have some people who would be like, 'That's kind of weird.' I think they see that it's just a precaution."

Continuing to Improve the Mechanics of Takeout and Delivery Orders

While in-person dining is still restricted in many states, restaurants across the country have spent the last two months adapting to an increase in takeout and delivery orders. Jeffrey Virojanapa, the owner of Notch Modern Kitchen & Bar and White Orchids in Pennsylvania, says the layout of their kitchens changed radically within the first week.

"We converted all of our stations and kitchen to curbside setup," he said. "Takeout containers were stacked with sharpies everywhere to write in dish names. We converted our point of sales from in-house dining to a pretty amped up 'online store,' of sorts.  We added pictures to all of the dishes in our takeout [and] delivery websites, built a shop to carry out wine and beer and added descriptions to everything to make decision making seamless. Luckily, things were able to take off."

While Pennsylvania is not open to in-person diners yet, Governor Tom Wolf announced on May 27 that all counties could resume outdoor dining on June 5, with limited-capacity indoor dining potentially following soon after. But as dining rooms open, Virojanapa doesn't think that the popularity of takeout options will diminish.

"Opening at a limited capacity will naturally take a toll on dining tips," Virojanapa said. "However, in 'adapting,' gone are the days where the common takeout tip was 0-10%.  We will adapt, and with curbside takeout not going away anytime soon, we will try and work both tipping systems for our employees at their benefit."

Socarrat Paella Bar's Manso agrees, but cautions that restaurants need to educate customers on how to better support them.

"I believe that in the future, delivery and to-go orders will make up a much larger percentage of income than in the past," Manso said. "In this regard, something to consider is supporting your local restaurants directly — ordering through their website, or calling for pick-up orders."

He continued: "Third-party apps such as Uber Eats or Seamless have a monopoly-like share of the delivery market and charge exorbitant fees to restaurants. When a customer chooses to use these third-party delivery apps instead of ordering directly through the restaurant, they are making it more difficult for us to stay in business."

While many chefs and restaurants have implemented creative solutions to an unprecedented service environment, everyone with whom I spoke for this piece stressed that every day brings new challenges simply because there are so many unknowns. No one can clearly envision what the future of dining will look like; there are some educated guesses to be made, for sure, but there's no roadmap and that's daunting.

But they're doing it anyway.

And according to Hakan Swahn, owner of Aquavit in New York City, that is the backbone of the restaurant industry.

"I think every chef and restaurateur keeps thinking about what the future will bring. It will change, no doubt, but we do not know how," he said. "The fact that we are thinking about it tells you that we are not giving up but are committed to fight for our survival."