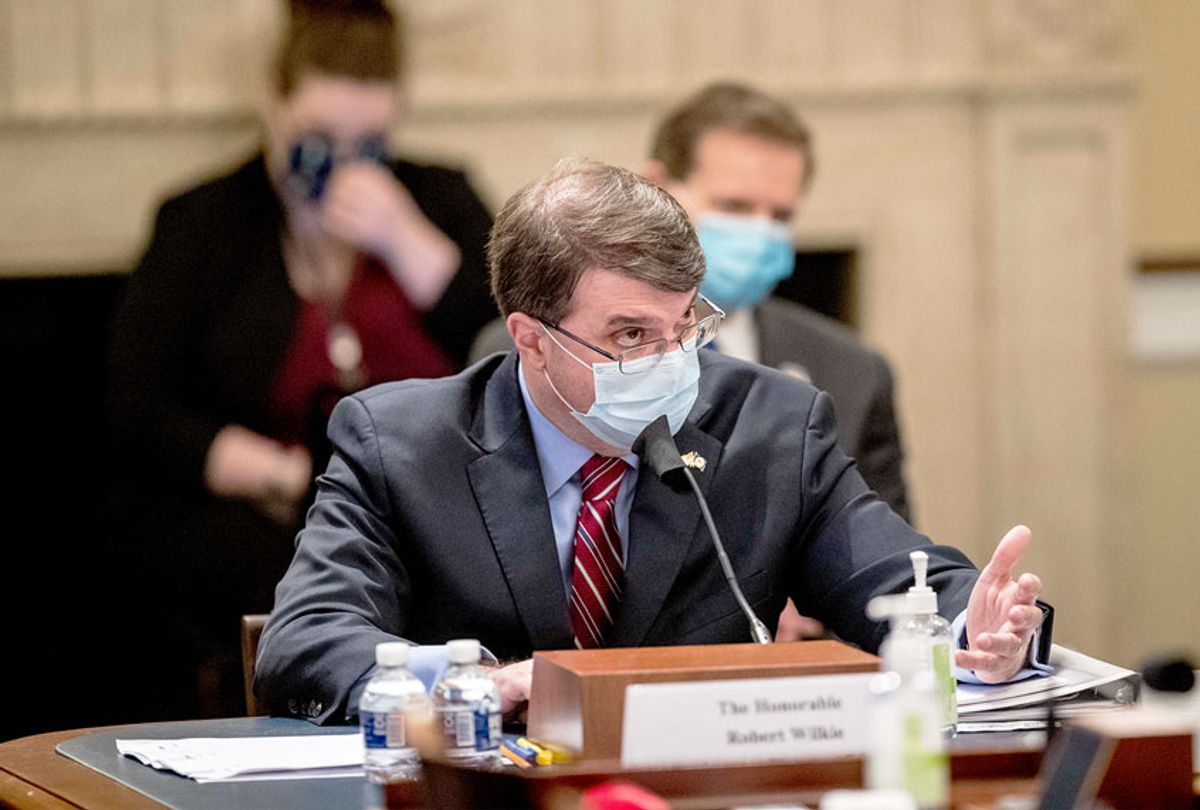 Veterans Affairs Secretary Robert Wilkie testifies during a House Appropriations Subcommittee on Military Construction, Veterans Affairs, and Related Agencies hearing on Capitol Hill about the Department of Veterans Affairs response to COVID-19 on May 28, 2020 in Washington, DC. (Andrew Harnik-Pool/Getty Images)
--

Veterans Affairs (VA) Secretary Robert Wilkie has refused to remove three headstones engraved with swastikas at the graves of German prisoners of war in national cemeteries in San Antonio and Utah, offering instead to make adjustments that put the markers in "historical context."

"I happen to think that making sure that when people visit our cemeteries they are educated and informed of the horror is an incredibly important thing to do," Wilkie testified to the House Military Construction-VA Appropriations subcommittee.

"Erasing these headstones removes them from memory," he added. "And as we continue to study the Holocaust, the last thing any Holocaust scholar wants to do is erase that memory."

"The Nazi swastika is prohibited in Germany from being displayed, because it is not seen as a reminder to prevent the hatred that it spawned," she said. "It is seen as something to be snuffed out."

Wilkie responded that he instead wanted to work with lawmakers to put the anti-Semitic iconography in proper "historical context."

German law bars the public display of swastikas, and all known monuments which featured the Nazi symbol have been removed or replaced. The headstones in all three U.S. cemeteries feature a swastika circumscribed in an Iron Cross, a medal of valor. Those at Fort Sam Houston in San Antonio also bear a phrase honoring Adolf Hitler.

Wasserman Schulz asked Wilkie to testify last week after a military religious freedom watchdog called on the VA to remove the headstones from the prisoner-of-war "Section Z" in Fort Sam, first reported nationally by Salon.

"The Military Religious Freedom Foundation (MRFF) condemns in the harshest terms possible the disgusting, disingenuous and dishonest testimony of VA Secretary Robert Wilkie before members of the United States Congress yesterday regarding the sordid matter of Nazi-adorned headstones at the gravesites of the three German POWs from World War II who are buried at two VA National Cemeteries," MRFF chair Mikey Weinstein, a Jewish Air Force vet and activist, told Salon in an email Friday.

The VA routinely changes out headstones in response to appropriate requests, such as for typographical errors. The military also keeps an official registry of available emblems of belief for placement on government headstones and markers. Neither the Iron Cross nor the swastika appear on the list.

Still, VA officials have claimed that U.S. law prevents them from removing the stones.

Les A. Melnyk, head of public affairs and outreach at the National Cemetery Administration, told Salon in an email that the Trump administration "will continue to preserve these headstones."

"The National Historic Preservation Act of 1966 assigns stewardship responsibilities to federal agencies, including VA and Army, to protect historic resources, including those that recognize divisive historical figures or events. For this reason, VA will continue to preserve these headstones, like every past administration has," he wrote.

Melnyk would not say whether he knew of any requests filed with past administrations, and a follow-up investigation by Salon could not uncover any.

Norman Rosenshein, an Army vet and former national commander of the Jewish War Veterans of the USA, suggested to The Wall Street Journal that the VA swap out the headstones and preserve them in storage.

Weinstein pointed to what he sees as an ideological through-line in Wilkie.

"Let's be quite clear who this Robert Wilkie person is: Wilkie's support of these Nazi headstone is not at all surprising," he said in an email. "He is a well known and documented advocate of the Civil War Confederacy who has praised Confederate President Jefferson Davis as a 'martyr' and an 'exceptional man in an exceptional age' while also condemning, in the most ignoble and vicious terms, the abolitionists who opposed slavery as 'radical,' 'mendacious' and 'enemies of liberty.'"

The Washington Post reported ahead of Wilkie's July 2018 Senate confirmation hearings that Wilkie had been a member of the Sons of Confederate Veterans. Wilkie was confirmed anyway.

Then in 2019, CNN reported that, in violation of Senate rules, Wilkie had failed to disclose a speech he gave in 2009 to a chapter of the Sons of Confederate Veterans and a 1995 address in which he praised former Confederate President Jefferson Davis at the U.S. Capitol.

Wasserman Schultz, who will author the VA's funding bill for the next year, told Wilkie in his hearing Thursday that "this is going to be dealt with one way or another."

She called on him to follow an investigatory process made available in the National Preservation Act, which would determine whether removal would be inappropriate.

Wilkie argued that would mean he would have to engage in "a very long process" but tried to assure the chairwoman that a compromise could still be reached.

"I don't think we're that far off, because I do think that putting those in context in the cemeteries is the way forward," he said.