The group is calling on the V.A. to apologize — and explain why it has used taxpayer money to maintain the graves 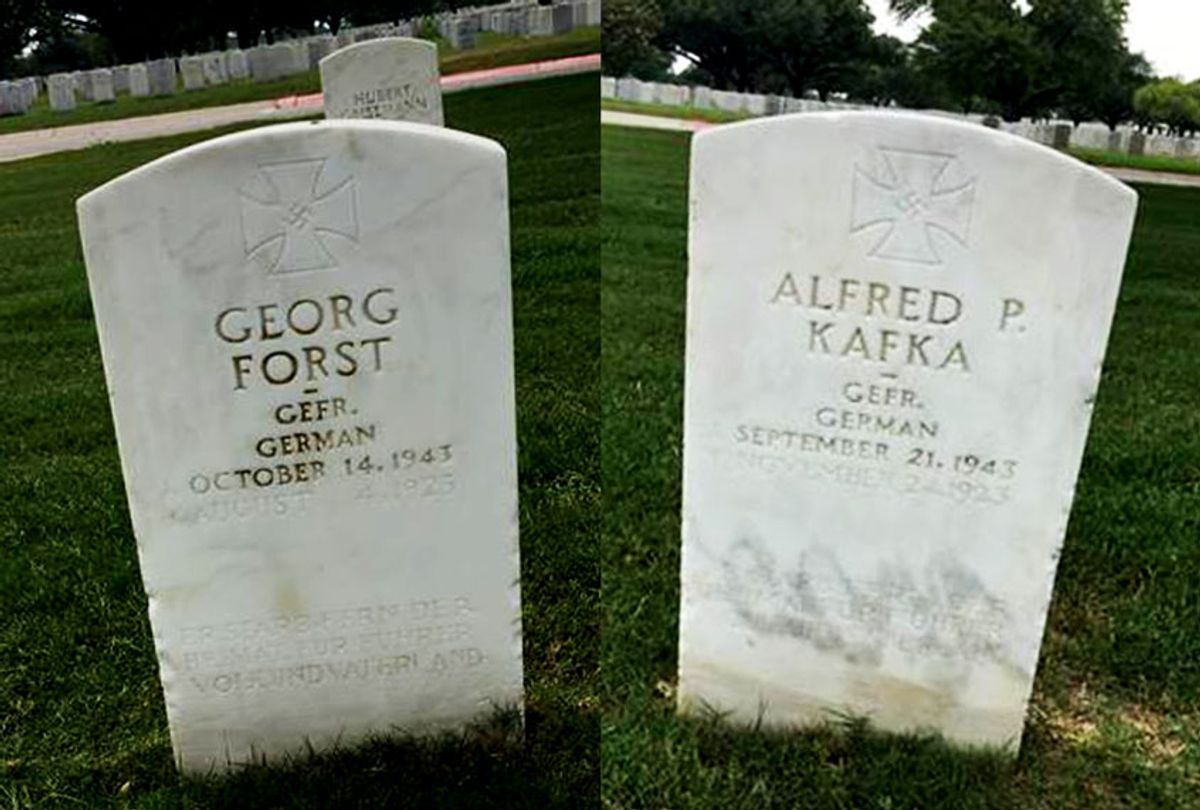 Two Nazi POW gravestones in Fort Sam Houston National Cemetery. At the top of the headstone one can readily see the Nazi Iron Cross with the swastika inscribed inside the Iron Cross. The inscription honoring Adolf Hitler is at the bottom of the headstone. (The Military Religious Freedom Foundation)
--

This article has been updated to include a statement from the V.A. National Cemetery Administration.

A nonprofit civil rights organization committed to preserving religious freedom in the military has asked the Department of Veterans Affairs to remove marble headstones inscribed with Nazi iconography and a phrase honoring Adolf Hitler at the graves of two German prisoners of war in a national cemetery in San Antonio.

Along with the soldiers' names and dates of birth and death, the headstones are engraved with a swastika in the center of an iron cross — an award for valor — and the phrase, "He died far from his home for the Führer, people and fatherland." "The Führer" is the name Hitler gave to himself.

Mikey Weinstein, chair of the Military Religious Freedom Foundation (MRFF), was tipped off to the headstones by a former active duty senior officer in the U.S. military. He shared photographs of the headstones with Salon.

Weinstein, who is Jewish, wrote Secretary of Veterans Affairs Robert Wilkie demanding that the department "immediately replace the gravestones of all German military personnel interred in V.A. National Cemeteries" and ensure that no Nazi-era symbols remain in U.S. military graveyards.

"Indeed, V.A. Secretary Wilkie must first timely explain why any such former enemy military personnel are even buried in V.A. national cemeteries in the first place alongside our honored deceased American veterans," Weinstein said.

The Fort Sam Houston V.A. cemetery is home to 133,154 American veterans, spouses or their children. Its "Section Z" hosts the remains of 140 prisoners of war from World War II, 132 of which were German.

By the end of World War II, nearly half a million Axis prisoners of war were transferred to about 700 camps in the U.S. The vast majority were repatriated at the end of the war, but POWs who died in the U.S. were buried at their prisons and sometimes reinterred in national cemeteries when camps shut down.

It is unclear why the remains of these two POWs, both of whom died in 1943, were not repatriated nor why their gravestones were inscribed with Nazi iconography and given military distinction.

The former military officer who shared the photos — who is Jewish — saw the headstones when he was paying respects to his grandfather, an ambulance driver who fought against the Germans in World War II. His father was also enlisted, and his uncle and aunt are both buried at the same cemetery.

"There are Nazis here today, and they could gather around these symbols. You know, 'Here are the martyrs that died for our cause,'" he told Salon. "It's an outrage."

Along with the German prisoners of war, the cemetery is home to four Italian, three Japanese and one Austrian. Historical records show that the POWs were buried in Section Z starting in 1947, according to a 2012 article about the cemetery in a local San Antonio publication.

"When they first buried the PWs out there, the section they were in was about as far from the active part of the cemetery as you can get and still be in the cemetery," former Fort Sam Houston Museum director John Manguso told the paper. "But, as time went on, the cemetery expanded out past where they're buried and so now they're about in the geographic center of it."

The VA routinely changes out headstones if appropriately requested, such as for errors in spelling or dates. The military also keeps a registry of Available Emblems of Belief for Placement on Government Headstones and Markers, and neither the iron cross nor the swastika appear on the official list.

"Somebody had to make a decision putting these Nazi symbols and that inscription honoring Adolf Hitler on those headstones," said the retired senior officer, who also had family members among the 6 million Jewish people murdered in the Holocaust. "Somebody had to do it."

Displays of white supremacy and anti-Semitism in the U.S. increased dramatically following Trump's ascension to the presidency. Among them was the 2018 massacre at Pittsburgh's Tree of Life synagogue, which was the deadliest anti-Semitic terrorist attack in U.S. history. But white supremacism has long nested in American culture, including in the military.

Pollsters found in 2017 that nearly one in four armed service members — and more than 40 percent of people of color in uniform — had encountered someone promoting white nationalism in the military. Republicans in Congress quietly removed the term "white nationalist" from a defense bill amendment aimed at keeping white nationalists out of the military last year, according to Rep. Pete Aguilar, D-Calif.

The retired military officer pointed out that the remains of the Nazi officers hanged at the Nuremburg trials were cremated and tossed into the Iscar River, so their resting places would not be shrines or destinations for Nazi pilgrims. Weinstein's group is now calling on the V.A. to apologize — and explain why it has used taxpayer money to maintain the gravestones.

"In light of the shocking and inexcusable existence of these Nazi-adorned gravesites in V.A. National Cemeteries, MRFF demands that you, Secretary Wilkie, issue an immediate and heartfelt apology to all United States veterans and their families," he wrote in a statement to the department.

You can read Melnyk's statement on behalf of the V.A. National Cemetery Administration below:

V.A. is aware of three headstones – two at Ft. Sam Houston National Cemetery and one at Ft. Douglas Post Cemetery – that include these symbols.

All of the headstones date back to the 1940s, when the Army approved the inscriptions in question. Both Ft. Sam Houston and Ft. Douglas cemeteries were subsequently transferred to the VA's National Cemetery Administration, in 1973 and 2019, respectively.

The National Historic Preservation Act of 1966 assigns stewardship responsibilities to federal agencies, including VA and Army, to protect historic resources, including those that recognize divisive historical figures or events. For this reason, VA will continue to preserve these headstones, like every past administration has.