Jewish Democratic group after anti-Semitic incidents: Trump is "not absolved of responsibility" 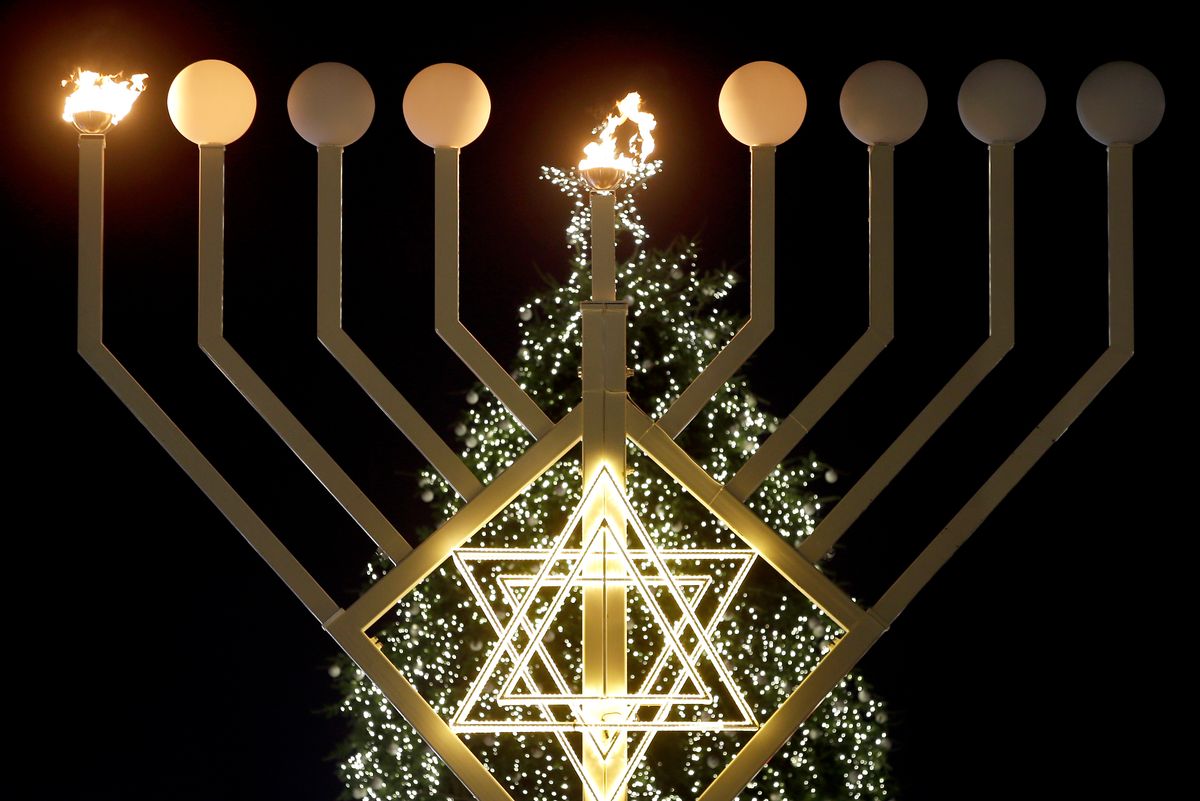 FILE - In this Tuesday, Dec. 16, 2014 file photo, the first flames of a a giant Hanukkah Menorah in front of a Christmas tree at the Brandenburg Gate in Berlin, Germany, burn at the launch of the eight-day Jewish Festival of Lights, named Hanukkah. The lights were inflamed by German Interior Minister Thomas de Maiziere and Rabbi Yehuda Teichtal. (AP Photo/Michael Sohn, File) (AP)
--

In the aftermath of a series of alleged anti-Semitic incidents in New York City, the Jewish Democratic Council of America  (JDCA) shared a statement with Salon saying that President Donald Trump is "not absolved of responsibility" for his role "in legitimizing and normalizing the rise of hatred that has afflicted our community in recent years."

“President Trump is not solely to blame for the rise of anti-Semitic violence – and we do not yet know the political beliefs or motivations of the perpetrators of recent attacks – but the president is not absolved of responsibility for emboldening hateful ideologies and extremists in our country," JDCA Executive Director Halie Soifer said in a statement on Sunday. "Hatred does not emerge in a vacuum, and President Trump’s rhetoric and policies have unquestionably played a role in legitimizing and normalizing the rise of hatred that has afflicted our community in recent years. Symbolic gestures on Israel have done nothing to make American Jews more secure."

Hasia Diner, a professor of American Jewish history at New York University, had a similar observation.

"On the one hand such vicious acts are happening in so many places against anyone defined as outside of the core population, the rightful owners of this nation or that. As such, this is bigger and more dangerous than him. Jews here, particularly those marked as visibly so, make excellent targets," Diner told Salon by email.

She added that "on the other hand, by his words which easily demonize certain people and his actions — his policies — he energizes the haters. His rhetoric is more than a match on dry tinder and his claims to love Jews and be the greatest defender of Israel is license to the white nationalists, almost a wink to them, a not very subtle code that their actions fit his agenda."

There have been a series of alleged anti-Semitic attacks in the New York City area through Hanukkah 2019, including stabbings at a rabbi's home in Monsey, New York on Saturday that left five people hospitalized. A suspect named Grafton Thomas was arrested after midnight with "blood all over him." Prior to the Monsey stabbings, there were a number of reported anti-Semitic incidents in the New York City area. A 65-year-old man near Manhattan claimed he was punched and kicked on Monday by an assailant shouting "F*** you, Jew"; on the same day a 67-year-old man in Brooklyn said that a group of teenagers struck his 6-year-old son and another 7-year-old boy from behind. On Tuesday a 25-year-old man in Brooklyn reported to police that a group of people taunted him with anti-Semitic slurs and one threw a drink at him; a 56-year-old Jewish Brooklyner claimed that he was punched after being approached by a group of people, also on Tuesday.

A 40-year-old man said that an individual blocked his path and punched him in the face while he was walking home on Wednesday, which was also Christmas Day, while a woman was accused of using her bag to attack a 34-year-old Jewish mother in front of her child on Thursday. On Friday a woman was accused of slapping three women in the head and face and, on that same day, a man walked into the Chabad Lubavitch World Headquarters and is accused of threatening to shoot and kill people.

Trump has made a number of anti-Semitic comments during his political career. In 2015 he told the Republican Jewish Coalition that "you’re not going to support me because I don’t want your money" and commented that there were more people in that room who had negotiated deals "than any room I’ve ever spoken" in. In August he remarked that, because high profile Democrats like Rep. Ilhan Omar of Minnesota have been critical of Israel, "any Jewish people that vote for a Democrat, I think it shows either a total lack of knowledge or great disloyalty."

Earlier this month Trump told the Israeli American Council that "you have people that are Jewish people, that are great people — they don't love Israel enough. You know that. You know that." He also claimed that Jews are going to be his biggest supporters because "you’ll be out of business in about 15 minutes" if a Democrat like Sen. Elizabeth Warren of Massachusetts becomes president.

Although Trump has characterized himself as pro-Israel, other presidents who supported Israel were later revealed to be anti-Semitic, including Democrat Harry Truman and Republican Richard Nixon.