This cult-favorite 1960s dish is still wildly popular — but why?

"Grape jelly" and "meatballs" sound like they shouldn't belong in the same sentence (let alone recipe!) 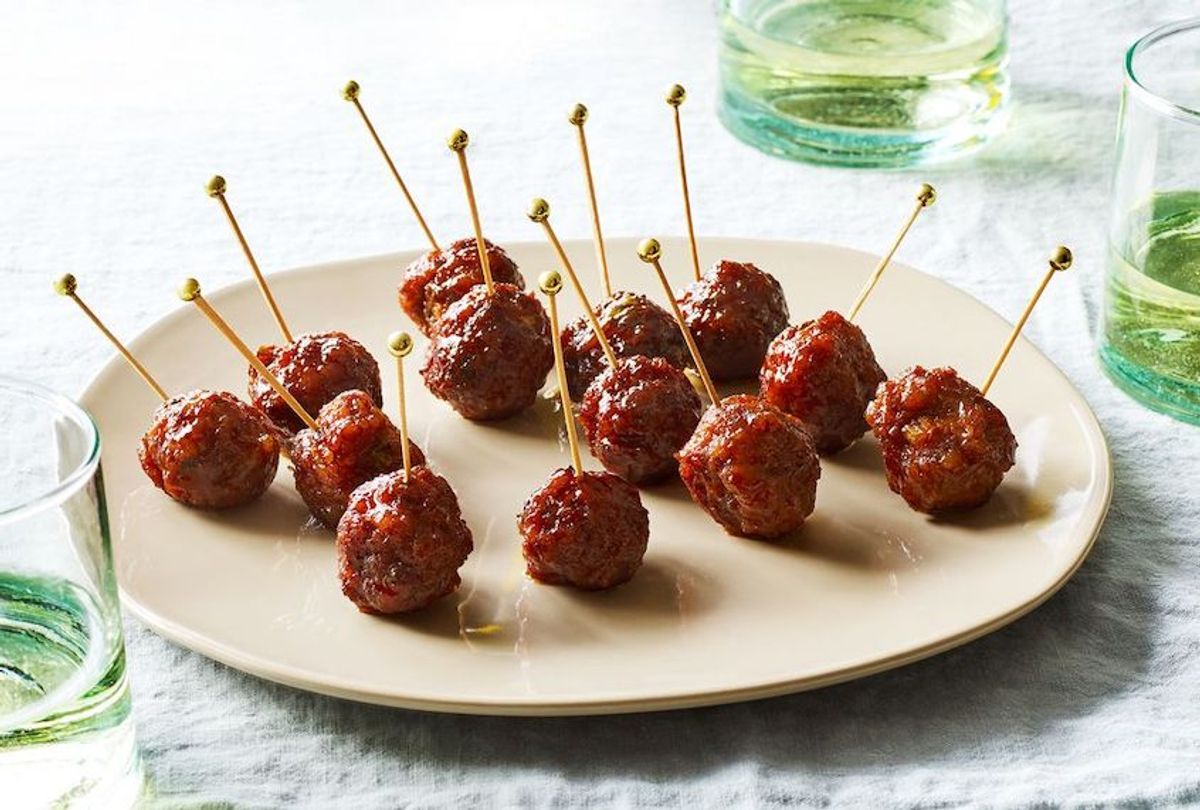 Grape jelly and meatballs. Sounds like two options a random word generator might spit out if programmed to a food setting. They couldn't possibly go together, flavor-wise. Au contraire. In fact, the grape jelly meatball has been a beloved appetizer since at least the 1960s—and it isn't going anywhere.

The dish is humble: Toss beef meatballs in a sauce of grape jelly and barbecue or a tomato-based chili sauce—always one prepared sauce, and always grape jelly. Stir in lemon juice, sometimes. Simmer until sticky.

It's difficult to determine who was the first to create a recipe for grape jelly meatballs, much less document it. In the 1960s, recipes for "cocktail meatballs" appeared in myriad texts, some of which were for a cream-based sauce (similar to Swedish meatballs), others made with ketchup and brown sugar. Many were for grape jelly-based sauce.

Marian Burros and Lois Levine's 1967 "Elegant But Easy Cookbook" features "Chafing Dish Meatballs," where meatballs are plopped, raw, into a pot with 12 ounces of tomato-based chili sauce, 10 ounces grape jelly, and lemon juice. (The mixture is boiled over the stove, then — of course — reheated in a chafing dish). In the revised 1998 edition of the title, the authors chose to leave the recipe unchanged, as it was "probably the most popular hors d'oeuvre in the book." They also note one of their recipe testers had developed her own recipe for these meatballs prior to trying theirs, echoing this dish's popularity at the time.

"Cocktail Meatballs" from the 1978 edition of "Betty Crocker's Cookbook" features a slightly more creative meatball (parsley and bread crumbs are involved, and they're browned in shortening first), but the recipe does call for the same amounts of jelly and chili sauce as Burros and Levine's dish. It also proposes a substitution of cocktail weiners for meatballs as an alternative.

A number of self-published community cookbooks (the first of which in the genre date back to at least the 1860s) also feature recipes for similar meatballs, and given the commonality of such books at the time, were likely the reason so many Americans grew up making grape jelly meatballs. Variations on the same meatball recipe appeared in countless editions of such books; as collections like these were typically put together for charitable fundraising efforts, it didn't matter particularly if the recipes were unique.

In fact, when I mentioned on my social networks that I was looking for original examples of this recipe, dozens cited a community text. Most mentioned their family makes the meatballs every year around the holidays.

"My mom has a large collection of old school cookbooks… she gets boxes of them at auctions and yard sales," Lee Kalpakis, a Brooklyn-based recipe developer, told me. Kalpakis recalled a recipe for "Pungent Meatballs" from one of her favorite books in the collection, In Good Taste, published in 1987. This version calls for barbecue sauce, grape jelly, and lemon juice. "The idea of meatballs swimming in something so sweet is a little jarring, but honestly, who am I to judge? Sugar enhances flavor. Plus, fruit and meat historically work well together," added Kalpakis, noting dishes like the pineapple and pork of al pastor, and Thanksgiving turkey with cranberry sauce. "A grape jelly meatball is kind of the same flavor profile, Betty Crocker-style."

And nearly everyone I spoke with recently knew these meatballs as a slow-cooker recipe, though none of the early documented recipes I found used the machine. Slow cookers first became available to the American consumer in the 1950s; it wasn't until the the early 1970s that the company was purchased and rebranded as "Crock-Pot," after which its popularity grew exponentially. Presumably as the slow cooker became such a favored kitchen tool, home cooks even transitioned away from the chafing dish traditional for their favorite cocktail meatballs.

"This recipe may date us, because it's a classic from the early '60s," write Linda Rehberg and Lois Conway about "Sweet and Sour Meatballs" in their 2005 book, "Slow Cooker Magic." "But it never fails to be a crowd-pleasing appetizer." Rehberg and Conway recommend using cooked frozen meatballs to speed up the process.

However popular in decades past, the recipe's origin and history do not explain why the dish remains so popular today. For that, we can thank the Internet. A search for "grape jelly meatballs" yields 1.3 million results; each recipe is pretty much identical. Google Trends shows a near-vertical spike of searches for the recipe every year during the month of December, and another small rise in early February (but more on that in a bit).

The resurgence in the popularity of slow-cookers in the past few years is hard to ignore, much of it likely owed to the fact that while many people want to revive elements of decades prior (say, the dinner party), the average day is busier than ever before. The slow cooker presents the option of a dish that cooks for hours but is completely hands off.

Historically, a crowd-feeding appetizer requiring little work certainly fits the bill for holiday parties; it's also checked the boxes for Super Bowl gatherings. In 2018, NFL star Odell Beckham Jr. partnered with Welch's on a YouTube video, in which the athlete and his mother prepare their "Game-Day Grape Jelly Meatballs. Their recipe is simple: frozen cocktail meatballs, grape jelly, barbecue sauce, and an optional addition of hot sauce tossed together in a slow cooker.

After all this, you might be still left wondering — which is the superior sauce for grape jelly meatballs, chili or barbecue? For that, you'll have to make the cult-favorite dish yourself.