After Trump threatened to deploy the military to quash protests over brutality, Biden offered a message of empathy 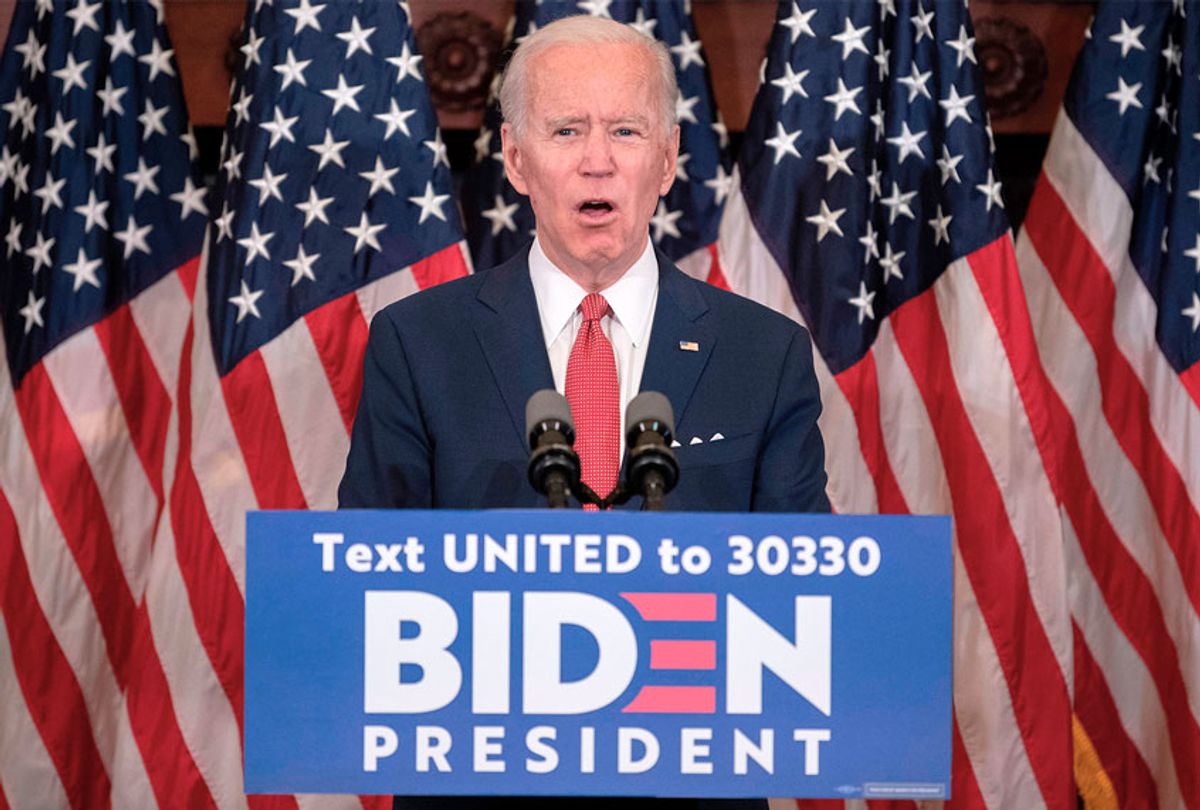 Former vice president and Democratic presidential candidate Joe Biden speaks about the unrest across the country from Philadelphia City Hall on June 2, 2020, in Philadelphia, Pennsylvania, contrasting his leadership style with that of US President Donald Trump, and calling George Floyd's death "a wake-up call for our nation." (JIM WATSON/AFP via Getty Images)
--

Presumptive Democratic nominee Joe Biden opened his Tuesday address to the nation by repeating the last words of George Floyd, the unarmed man whose death in police custody sparked the largest wave of civil unrest the U.S. has seen in decades. The former vice president called Floyd's words "a wake-up call for our nation."

"They speak to a nation where too often just the color of your skin puts your life at risk," Biden said. "A nation where 100,000 people have lost their lives to a virus and 45 million have filed for unemployment — with a disproportionate amount of those deaths and losses concentrated in black and brown communities."

Speaking behind a podium at Philadelphia's City Hall and backed by a succession of American flags, Biden acknowledged that black Americans have "had a knee on their neck for a long time."

In the speech, which was lauded in liberal and mainstream conservative circles alike, Biden cast himself as a new moral post for America as a crisis over racial injustice rocks a nation "crying out for leadership." He offered a message of empathy and hope while also calling out his prospective opponent, incumbent President Donald Trump.

"Trump has turned this country into a battlefield riven by old resentments and fresh fears," Biden said.

"When peaceful protesters are dispersed by the order of the president from the doorstep of the people's house — the White House — using tear gas and flash grenades in order to stage a photo-op at a noble church, we can be forgiven for believing that the president is more interested in power than in principle," Biden continued. "More interested in serving the passions of his base than the needs of the people in his care. For that's what the presidency is: the duty to care — to care for all of us."

Trump called the nationwide protests against police brutality "acts of domestic terror" in a Rose Garden address the day before. The president said he had mobilized "thousands and thousands of heavily armed soldiers, military personnel and law enforcement officers" to quench the demonstrations.

Moments earlier, a brigade of federal law enforcement agencies deployed tear gas and rubber bullets to drive hundreds of peaceful protesters out of Lafayette Square in order to clear a path for Trump to pose for pictures in front of an historic church with a Bible.

"Our country always wins. That is why I am taking immediate presidential action to stop the violence," the president said, as a CNN split-screen showed protesters retreating from mounted police amid clouds of gas.

"The president held up the Bible at St. John's Church yesterday," Biden, a practicing Catholic, said. "I just wish he opened it once in a while instead of brandishing it."

"If he opened it, he could have learned something: that we are all called to love one another as we love ourselves," Biden added. "It's really hard work, but it's the work of America. Donald Trump isn't interested in doing that work."

When asked why the address earned a bipartisan reception, Moe Vela, a longtime Democratic operative and a former senior White House aide to Biden, said: "It is not in his nature to politicize somebody else's anguish."

"And what a contrast with the current president, who immediately moved in for the politicization of this murder," Vela continued.

Since Floyd's death, mostly peaceful demonstrations across the nation have been marred by nighttime incidences of arson, vandalism and clashes between protesters and law enforcement. A week later, the unrest shows no sign of slowing.

"This is not simply or merely because George Floyd died," Vela said. "It's an inflection point in American history. Anyone with any decency in our body is in pain right now."

"This is personal — for everyone who's been bullied," he added as he pointed to Biden's bid for voters' empathy. "Anybody who's been called a 'spic' or a 'fag' like I have, or any woman who's been demeaned or harassed or any black person who's been called the N-word or knocked down by police — this is personal to every single one of us. What we need now is what you heard from him today: Stick together, unite, it's going to be OK."

Biden pledged to use his first 100 days in office to confront issues of systemic racism. He vowed to create a law enforcement oversight commission as he called on Congress to make what he called "a down payment on what is long overdue," including legislation that bans the sale of military-style weapons to police and sets across-the-board standards governing the use of force.

"Donald Trump has turned this country into a battlefield driven by old resentments and fresh fears," Biden said. "He thinks division helps him. His narcissism has become more important than the nation's well-being that he leads."

Katrina Pierson, a Trump campaign adviser, responded to the speech in a statement which claimed that Biden had "obviously made the crass political calculation that unrest in America is a benefit to his candidacy."

"Over the course of his public life, Joe Biden has used the politics of racial division when they suited his needs and he is doing it again," she said, alluding to Biden's work on the 1994 Crime Bill, which has been criticized for hollowing out poor communities of color and contributing to a surge in mass incarceration.

"The presidency is a big job. Nobody will get everything right, and I won't either," Biden said Tuesday. "But I promise you this: I won't traffic in fear and division. I won't fan the flames of hate," he added.

Vela, the former Biden aide, observed that "the reason Trump is falling flat now is that he is failing to address the root problem."

"People want to be seen and heard, and he's not seeing and hearing them," Vela said of the president. "He's throwing more water on a grease fire, and he will not address or acknowledge the root problem."

"It will come down to each individual person in that booth, the privacy of that vote," he added. "That's the choice: Will this be the day that we collapse?"