George Floyd died in agony and a police station burns: This is Donald Trump's America

It wasn't just Derek Chauvin who crushed the life out of George Floyd. It was the force of American history 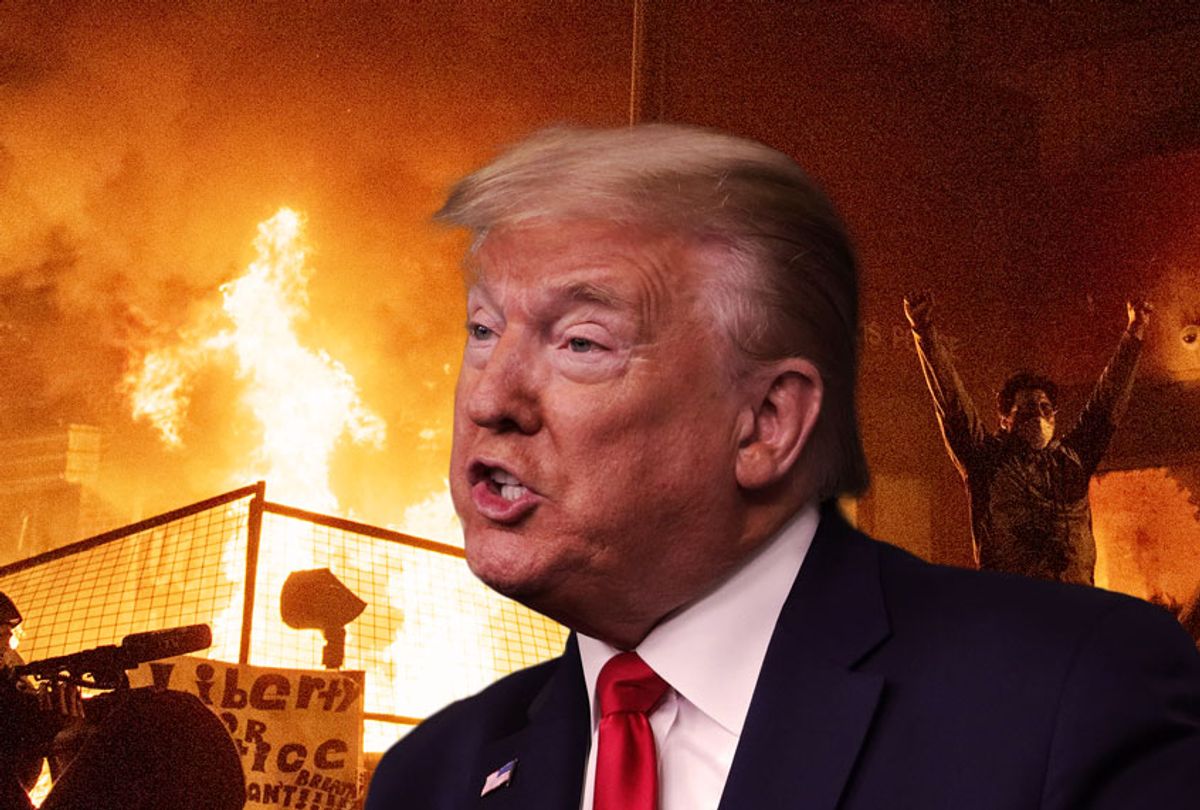 Encouraging police brutality and other forms violence is one of Donald Trump's favorite things to do.

In a 2017 speech, Donald Trump told police: "Please don't be too nice" to suspected criminals.

Predictably, Trump's administration has systematically removed civil rights protections designed to hold America's police accountable for acts of brutality and other crimes against the public.

George Floyd was detained by Minneapolis police officer Derek Chauvin and three of his colleagues on suspicion of using a forged $20 bill to make a purchase at a local convenience store.

The police surrounded the car in which Floyd and a friend were sitting. Floyd cooperated with the police officers and did not resist arrest. He was not armed.

Almost immediately, George Floyd exhibited signs of medical distress and appeared to have difficulty walking. One of the police officers allowed Floyd, while handcuffed, to sit on the sidewalk next to a nearby building.

Newly obtained surveillance footage shows that contrary to the official police report, Floyd at no time resisted arrest while being taken from his vehicle.

A bystander's video recording shot shortly afterwards shows Derek Chauvin standing over George Floyd with his knee on the latter's neck. This continued for almost nine minutes. Floyd begged for mercy and cried out for his mother, repeatedly saying that he could not breathe. By this time a crowd of people were begging the officers to stop hurting him.

George Floyd was pronounced dead at 9:25 p.m., approximately 90 minutes after his encounter with Derek Chauvin and the three other Minneapolis officers (J. Alexander Kueng, Thomas Lane and Tou Thao) began.

No adjectives are needed to describe the killing of George Floyd. The facts are horrible enough.

Despite overwhelming video and eyewitness testimony suggesting a probable homicide, Chauvin was not immediately arrested.

Chauvin's fellow police officers still have not been arrested for their role in the killing of George Floyd, although all four have been fired by the Minneapolis Police Department.

This insult to justice, common sense and human decency has sparked days of protests — first in the Twin Cities and then in many other places in America: Atlanta, Chicago, Los Angeles, New York, Oakland, Washington, Philadelphia, Nashville, Detroit, Des Moines, Memphis, Louisville and Houston.

These protests have included acts of civil unrest and resistance, largely after local police provoked the crowds by using tear gas, rubber bullets and stun grenades and other unnecessary measures.

In what will become an iconic image, last Thursday the Third Precinct building in Minneapolis Police, where Chauvin and the three other officers involved in George Floyd's killing were assigned, was set on fire by protesters as fireworks exploded in the night sky.

For protesters and other people of conscience who are disgusted by police brutality, the burning of that precinct building had a powerful effect, likely akin to the toppling of Saddam Hussein's statue in Baghdad after the fall of his government in Iraq.

These protests have both an immediate cause as well as a deeper one.

The killing of George Floyd is the most immediate reason why tens of thousands of people have taken to the streets. But these protests are also a response to the larger system of social inequality and injustice which provided the context for Floyd's killing, and for the fact that Minneapolis officers reasonably believed they could commit such a heinous act without being punished.

In his 1967 "Other America" speech, the Rev. Martin Luther King Jr. famously remarked:

The past is prologue. The past is not even past. In his explanation of the root causes for the wide-scale urban rebellions of the 1960s, William S. Pretzer, senior curator for the National Museum of African American History and Culture, told Smithsonian Magazine:

Commonly sparked by repressive and violent police actions, urban uprisings were political acts of self-defense and racial liberation on a mass, public scale. Legislative successes at the federal level with the Civil Rights and Voting Rights Acts were not reflected in the daily lives of African-Americans facing police misconduct, economic inequality, segregated housing, and inferior educations.

In the Age of Trump these longstanding injustices have been made worse by the president, the Republican Party and their allies and supporters. The corporate neoliberal wing of the Democratic Party shares no small part of the responsibility for perpetuating said injustices.

What type of "leadership" has Donald Trump shown in response to the police killing of George Floyd?

Donald Trump called the protesters "thugs," and appeared to threaten them with death.

On Friday night, Trump wrote on Twitter: "These THUGS are dishonoring the memory of George Floyd, and I won't let that happen. Just spoke to Governor Tim Walz and told him that the Military is with him all the way. Any difficulty and we will assume control but, when the looting starts, the shooting starts. Thank you!"

Trump's moral compass is so grotesquely deformed that he sees no problem with calling black and brown protesters "thugs" while infamously describing the rampaging Nazis, white supremacists and other right-wing brigands of the Charlottesville riots in 2017 as "very fine people".

Donald Trump also praises armed right-wing "militias" and other paramilitaries who have engaged in acts of insurrection against Democratic governors in Michigan and elsewhere, in supposed protests against coronavirus public health rules, describing them "very good people."

On Saturday, Trump claimed on Twitter that it would be "MAGA Night" at the White House, seemingly calling upon his right-wing paramilitary supporters and enforcers to attack protesters on the streets of the nation's capital. (In fact, none of Trump's supposed MAGA troops showed up.)

Trump also suggested he would unleash the Secret Service, with its "ominous weapons" and "vicious dogs," if protesters breached the fence surrounding the White House grounds.

Trump made an obligatory effort at outreach, placing a phone call to George Floyd's brother, Philonise. It did not go well.

During an interview Saturday on MSNBC with the Rev. Al Sharpton, Philonise explained what happened when Donald Trump called him: "It was so fast…. He didn't give me an opportunity to even speak. It was hard, I was trying to talk to him, but he just kept like pushing me off, like 'I don't want to hear what you're talking about.' And I just told him I want justice. I said that I couldn't believe they committed a modern-day lynching in broad daylight. I can't stand for that, I can't — and it hurt me."

During a brief press conference last Friday, Trump made no mention of George Floyd or the protests — clearly the dominant national news story of the week. That silence was just one more example of the president's obvious lack of empathy, care or concern for other human beings — especially for nonwhite people.

Last Friday, Derek Chauvin was finally arrested and charged with third-degree murder and second-degree manslaughter in the killing of George Floyd. The other three former Minneapolis officers involved in the killing are still at large.

What of the human being named George Floyd? His friends and family describe him as a loving, kind, gentle and patient person, as well as a talented athlete.

In his younger years, he spent time in prison for various crimes, but moved to Minneapolis in 2014 to change his behavior and start a better life. Last Monday night, that life ended when Floyd suffered a horrible, tragic and unnecessary death. Those eight-plus minutes that he lay on the pavement, unable to breath while Derek Chauvin's knee crushed the life out of him, must have felt like forever. Floyd knew he was being killed.

Derek Chauvin would keep his knee on George Floyd's neck for at least two minutes after Floyd's body went completely limp. As Floyd lay dying under his knee, Chauvin kept his hands in his own pockets, so casual and so proud of his lethal power over another human being.

The image of Derek Chauvin lingering over George Floyd's body was like that of a big game hunter posing over his prized kill.

George Floyd's suffering was not an isolated event. It is one of millions of such moments in a chain of black human suffering in America that stretches back prior to 1619 in Jamestown, Virginia, and continues in the Age of Trump.

In that chain of suffering, black men, black women, black boys and black girls have been murdered and abused by white people because of the color of their skin, which marked them as being "socially dead." They were seen as lesser people, disposable people, who could be harmed and killed without consequence or justification. Such outcomes are just the natural order of things in a white supremacist society.

There are moments when the crushing weight of history comes crashing down on one person in a single moment. In that moment, such a person becomes a symbol of something much larger. George Floyd is now one of those people.

America's multiracial democracy is groaning and suffering in pain from Donald Trump and his movement's furious torrent of assaults and abuse.

George Floyd cried for his mother and begged for mercy, as the weight of Derek Chauvin's body snuffed out his life. For decent human beings, those sounds are horrible. But for Donald Trump and those who support him — whether or not they admit it — George Floyd's misery was like their own national anthem.

Donald Trump and his goons have their boots on the neck of America's multiracial democracy. Through various means such as voter suppression, harassment and intimidation, gerrymandering and outright fraud, Trump and the Republicans are taking away black and brown people's constitutionally-guaranteed right to vote.

New social science research shows that at least some Trump's white voters would rather live in an authoritarian state where they are the dominant group than share power with black and brown people in a multiracial democracy.

Donald Trump and his regime are using the coronavirus pandemic to commit what epidemiologist Dr. Gregg Gonsalves has described as de facto "genocide" against black and brown people and other vulnerable groups.

Ultimately, Trump and the Republicans know that their policies are wildly unpopular and that they can remain in power only through minority rule. So their attack on America's multiracial democracy is to subvert the collective will of the American people.

In that context, George Floyd's killing was not "senseless." It was the predictable result of White America's racial logic and Donald Trump's wish fulfillment. It was a dark fantasy acted out for those who share Trump's vision of making America "great again" by subduing black people, and if necessary crushing them.