A nationwide police riot: Is our outrage about "violence" pointed at the real perpetrators?

Amid the chaos and confusion of America's days of rage, our lawless, authoritarian police show their true colors 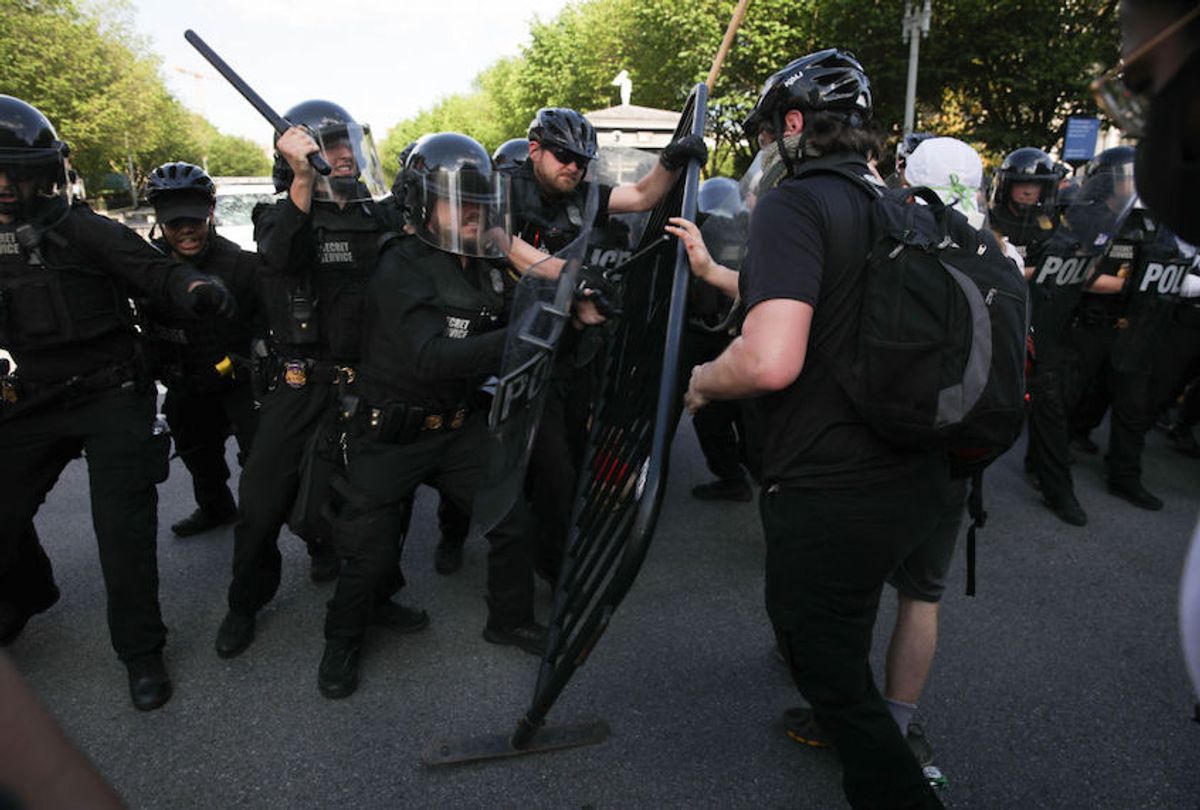 Demonstrators, gathered at Lafayette Park across from the White House, attempt to breach a police barricade during a protest over the death of George Floyd, an unarmed black man who died after being pinned down by a white police officer in Washington, United States on May 30, 2020. (Yasin Ozturk/Anadolu Agency via Getty Images)
--

America is on fire. We are all confused and in pain. If no one exactly foresaw the national explosion of outrage that followed the vicious police killing of George Floyd in Minneapolis, none of us can claim it comes as a total surprise. We were already at a moment of crisis in the United States, and have been there for the last four years, if not longer.

George Floyd's agonizing death, face down in the street with a snickering cop's knee on his throat — his murder, let's call it what it was — may have been the inciting incident for the wave of angry protests that has spread across the country in the last week, from Minneapolis to Los Angeles to Brooklyn to the gates of the White House. From Dallas to Atlanta to both Portlands, in Maine and in Oregon. From Louisville to Salt Lake City to Erie, Pennsylvania, to Fort Wayne, Indiana.

But that anger and outrage — the peaceful protests and the disorderly or confrontational ones and the ones that devolved into looting and vandalism and "violence" — are about something much larger and more difficult to define than the death of one more black man at the hands of one more white cop. And whether you or I "condone" what is happening — or instead would rather cluck about how, gosh, things have gotten out of control and now everybody should go home but please do remember to vote for Joe Biden in five months — is massively, blindingly beside the point.

Because something has been revealed here, which even the major voices in mainstream media cannot avoid. It isn't something about the possibly excessive, possibly regrettable protests or about their ambiguous racial dynamic, issues that until Saturday seemed to dominate the chattering-class social media discourse. It's about America's police, which increasingly resemble a lawless, authoritarian third force, largely unconstrained by political leaders, heedless of their own supposed rules and internally compromised by far-right or white supremacist ideology.

What we have seen in the United States over the last 48 to 72 hours is a nationwide "police riot," a term made famous more than 50 years ago during the protests outside the 1968 Democratic convention in Chicago. As David Fahrenthold and Arelis Hernández reported for the Washington Post on Sunday morning, police in Minneapolis and elsewhere sought "a forceful restoration of control," but "the effect was often the opposite, signaling disorder among those whose job it was to restore order":

Police in several cities significantly increased their use of force on Saturday night against protesters decrying police use of force — wielding batons, rubber bullets and pepper spray in incidents that also targeted bystanders and journalists. …

The use of force by police sometimes seemed unconnected to any threat that they faced, and aimed at people who had little to do with the violent protests.

If you've spent any time on social media in the last few days, you've seen this stuff: Numerous journalists have been shot, beaten, attacked or arrested by police. Freelance photographer Lisa Tirado reported that she was permanently blinded in one eye after being struck by a rubber bullet or some similar projectile on the street in Minneapolis. Journalists in Louisville shot video of police apparently targeting them with pepper balls.

New York police drove an SUV through a crowd of protesters in the Flatbush neighborhood of Brooklyn; by sheer good luck, no one was seriously hurt. In Atlanta, police assaulted two people in a car for no evident reason, smashing the windows, subduing the couple with Tasers and forcibly dragging them from the vehicle. In Erie, Pennsylvania, a young woman was maced and then kicked by police while she was sitting on the ground. In Salt Lake City, an officer shoved an elderly man with a cane to the street. We could keep going with this, but you get the point.

So this is a moment of clarity, when the mask has been ripped from American law enforcement as an autonomous national institution that observes no laws beyond its internal tribal codes. We must face that threat directly, rather than tiptoeing gingerly around the monolithic power of police unions while engaging in airless, hair-splitting debates about the ethical dimensions of what disenfranchised people are doing in the streets.

I'm not trying to shove aside or "contextualize" the systematic injustice inflicted for generations on black people in America, as well as on people of color, immigrants and other marginalized communities more generally. White supremacy and racist violence stand as central pillars in a larger structure of American injustice that distorts our entire society, and damages all of us as individuals. (Salon's Chauncey DeVega has written several important pieces about the ways racism hurts white people, which shouldn't be a confusing or controversial assertion but apparently still is.) As I learned only after publishing the first version of this article, Sunday marks the 99th anniversary of the Tulsa race massacre, a horrendous incident recently fictionalized in the HBO series "Watchmen."

My point is that George Floyd's death was not just another shocking individual tragedy, or another gut-wrenching blow to the black community, or another far-too-clear illustration of the problem of police violence and police racism. It happened when it happened, after three and a half years of a corrupt and criminal president who thrives on vicious racial discord and has eagerly tried to demolish the federal government from within and undermine the already-crumbling infrastructure of democracy. It happened after most of the country has been under lockdown for two months, because the corrupt and criminal president has so spectacularly failed to respond to the worst viral pandemic in a century. It happened after 100,000 people have died and perhaps 40 million have lost their jobs — and when it's clear that the death and illness and economic devastation have overwhelmingly and disproportionately affected lower-income black and brown people in our cities, who are also disproportionately likely to be "essential workers" who cannot protect themselves by staying home.

George Floyd was of course a human being, and his family and community have suffered a terrible loss. But his death, captured in one of the most gruesome viral videos of our voyeuristic age, has become a symbolic national tragedy and has provoked a national outpouring of rage, which was about racial injustice but also transcended that issue. Perhaps that is not fair, and perhaps there are elements of "appropriation" at work. Whatever: That's what happened. Some of that anger was directed and contained and controlled, and some of it has been purely chaotic.

Outrage is not an emotion ruled by considerations of logic or morality or political strategy. On this gorgeous but ominous summer weekend — the second of the season, normally a moment of swelling exuberance — the elected officials and "community leaders" and so on who are trying to contain or control or domesticate this uprising sound rather too much like the notoriously trepidatious Sen. Susan Collins of Maine, expressing her grave concern over the regrettable doings and sayings of her own party's president. In other words, they reveal their own powerlessness, and propose milquetoast hand-holding solutions that are nowhere near commensurate with the problem.

We're better off acknowledging that in this ambiguous and chaotic situation nobody has the "right answer," and one-size-fits-all explanations simply don't fit. Many people in the African-American community are understandably eager to discourage property destruction or attacks on the police, and to emphasize that a large majority of protesters, of all races, have been nonviolent.

There are anecdotal reports on social media and elsewhere that white protesters, perhaps "anarchists" or Antifa or (in more elaborate theories) right-wing provocateurs, have in some cities led or encouraged vandalism and looting. Some or all of that may be happening.

I'm reasonably well acquainted with the radical left, which is not monolithic but includes some people who may see this moment as an opportunity to raise the temperature and "heighten the contradictions." And every single leftist protest movement of the last 60 years or so has been infiltrated and undermined to some degree by undercover cops or informants — so it's not just plausible but virtually certain that some of that is happening now.

But I'm profoundly suspicious of the narrative that at first there were "legitimate" or "authentic" protests led by people of color, which were then co-opted or subverted by a devious conspiracy of black-clad vegan Bernie Bros who decided to smash the state, or at least smash the windows at Foot Locker. (Or, for that matter, by a cabal of far-right "boogaloo boys" or paid operatives of Vladimir Putin.) Not only is that simplistic and patronizing — denying both the agency and the complexity of black protest and black rage — it's also the version of events being pushed by Attorney General Bill Barr and the Justice Department, completely without evidence. Which honestly ought to be a big enough clue.

On Saturday morning, both Minnesota Gov. Tim Walz and St. Paul Mayor Melvin Carter suggested that the majority of people arrested in Friday night's protests had come from out of state. I don't know who fed them that disinformation, or whether they actually believed it. But the mainstream media spread that lie so widely and so effectively that by the time local reporters actually dug up the facts — nearly everyone arrested was a Twin Cities local — it was pointless to explain that a fable swallowed whole by liberals and conservatives alike had been bald-faced propaganda.

If you feel compelled to construct a hierarchy of righteousness based on skin color or zip code, or to suggest that white activists ("anarchist" or otherwise) have no right to feel outrage about George Floyd or social injustice or the condition of America, then go right ahead. If we refer to Martin Luther King Jr.'s famous comment that riots are "the voice of the unheard," then I would suggest that the range of people who feel unheard in contemporary America cannot be contained to any specific demographic.

If you want to argue that specific incidents of random looting or property destruction are counterproductive, you may be on firmer ground. But if you want to argue that "violence" — a term that lacks a clear definition — is always pointless and never accomplishes anything, then I would suggest that you read some history about the French Revolution or the American Revolution or the ANC under apartheid or the IRA or the anti-colonialist and anti-imperialist movements of the '60s and '70s or pretty much every other damn thing that has ever happened. But first of all, try to tell that one to America's cops. They don't seem to agree.