Seven were shot at a protest over Breonna Taylor's death, driver allegedly tries to run over protestors in Denver 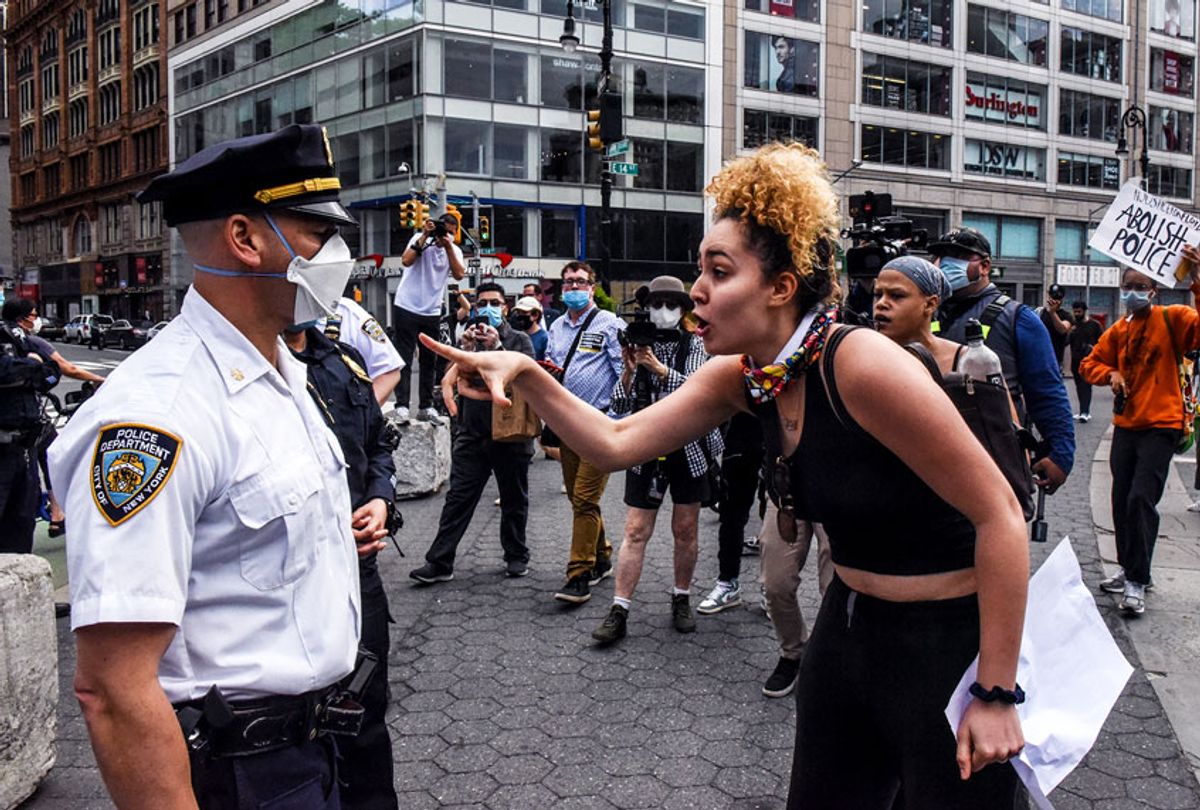 Protesters clash with police during a rally against the death of Minneapolis, Minnesota man George Floyd at the hands of police on May 28, 2020 in Union Square in New York City. (Stephanie Keith/Getty Images)
--

Protesters against police brutality faced violence themselves across the country in cities like Denver, Louisville and New York as racial tensions boiled over after unarmed black man George Floyd died in the custody of Minneapolis police officers.

At least seven people were shot in Louisville during a protest over the death of Breonna Taylor, according to the Louisville Courier Journal. Two of the victims required surgery, while the other five are said to be in good condition.

Protesters were seen clashing with police officers, though a police spokeswoman told the outlet that officers did not fire their guns. Louisville Mayor Greg Fischer said the violence "came from within the crowd," according to The New York Times.

Taylor, a 26-year-old EMT, was shot and killed on March 13 after Louisville police officers forced their way into her apartment as part of a drug investigation. Taylor's boyfriend, Kenneth Walker, said he fired a shot in self-defense, because he did not know who was trying to get into the apartment. Three officers opened fire, hitting Taylor eight times. No drugs were found in the apartment. The FBI and the state attorney general's office have opened an investigation into the killing.

"We are not going to stop until we get justice," Taylor's sister Juniyah Palmer said in a video posted to social media as the protests grew violent on Thursday night. "But we should stop tonight before people get hurt."

"Do not succumb to the levels that we see out of the police," she wrote on Facebook. "Speak. Protest. But do not resort to violence."

Things also turned violent in Denver, where police said six or seven shots were fired toward the Capitol building early in the protest. There were no known injuries, and it remains unclear where the shots came from, police told The Denver Post.

"We just got shot at," state Rep. Leslie Herod tweeted. She told the Denver Post that police "told us all to get down and run."

"They shot into a crowd of people protesting police brutality," she said. "It's an act of violence against our community."

A driver was seen apparently trying to run over protesters who blocked an intersection in downtown Denver.

"While we are still uncovering all of the facts about what took place, a protest regarding the killing of George Floyd devolved into vandalism and violence, and I was absolutely shocked by video evidence of a motorist attempting to run over a protestor," Colorado Gov. Jared Polis said. "Coloradans are better than this. I share the immense anguish we all feel about the unjust murder of George Floyd. But let me be clear, senseless violence will never be healed by more violence."

Police were also seen clashing with demonstrators Thursday in New York's Union Square, where officials said at least 40 people were arrested during the protest.

The city's leaders tried to strike a conciliatory tone on social media.

"I've seen the video. I am horrified. George Floyd was murdered in broad daylight and the man who killed him was a police officer — and that officer didn't seem to care at all that he was taking a man's life," New York Mayor Bill de Blasio tweeted. "If George was white, he would be alive right now."

In Minneapolis, where Gov. Tim Walz activated the National Guard and declared a state of emergency amid a third night of protests, protesters set fire to the police precinct where the officers involved in Floyd's death worked. Protesters have clashed with police after earlier peaceful protests were met with tear gas. The police response to the protests has drawn criticism after officers were seen doing nothing as armed protesters stormed state capitols to protest coronavirus restrictions.

"The Governor of Michigan should give a little, and put out the fire," Trump tweeted about protesters in the state. "These are very good people, but they are angry. They want their lives back again, safely! See them, talk to them, make a deal."

State troopers cleared out streets early Friday morning, sweeping up CNN reporter Omar Jimenez and his crew, claiming they did not move when asked even though video of the incident, which aired live, shows the crew was cooperative and complied with police commands. The crew repeatedly told officers they were reporters, but they were arrested nonetheless.

"In the course of clearing the streets and restoring order at Lake Street and Snelling Avenue, four people were arrested by State Patrol troopers, including three members of a CNN crew," Minnesota State Patrol said in a tweet. "The three were released once they were confirmed to be members of the media."

Walz later told CNN that the arrests were "unacceptable" and apologized to the network.