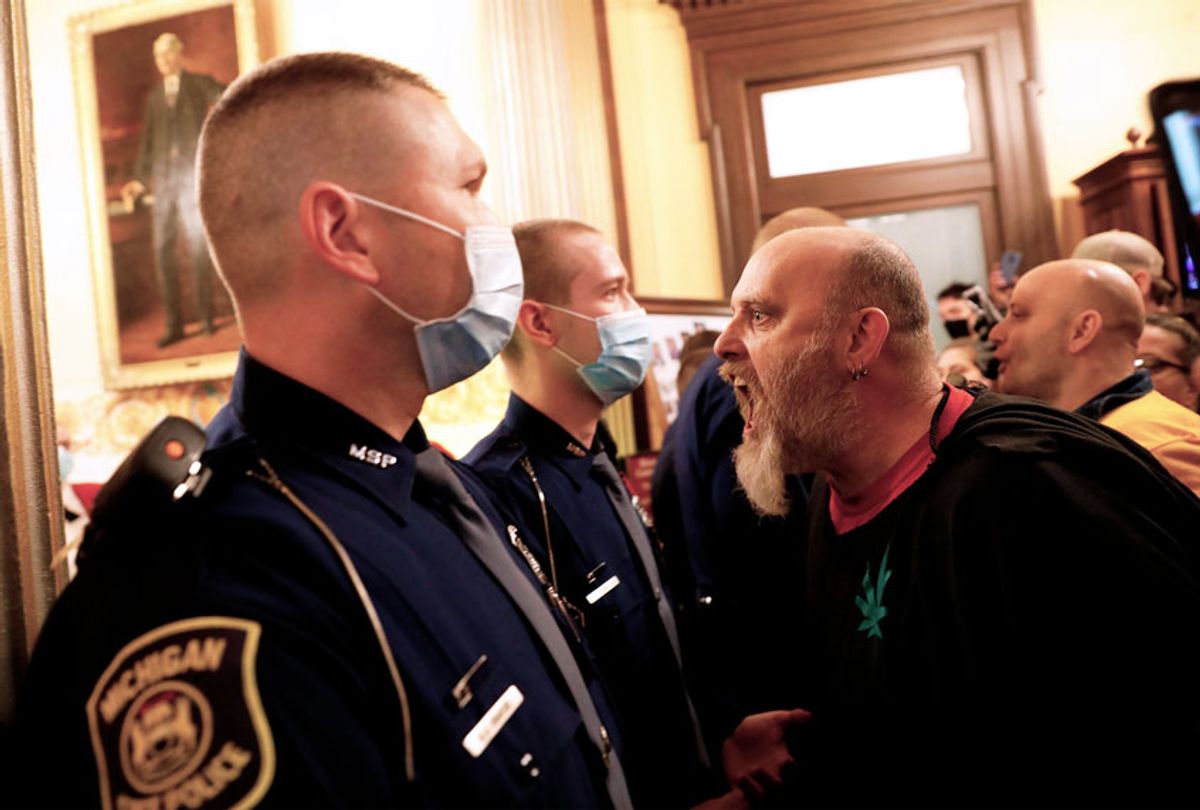 President Trump threw his support behind armed right-wing protesters who entered the Michigan Capitol shouting and blocked the office of Democratic Gov. Gretchen Whitmer, claiming that they are "very good people, but they are angry."

"The Governor of Michigan should give a little, and put out the fire," Trump tweeted. "These are very good people, but they are angry. They want their lives back again, safely! See them, talk to them, make a deal."

The president did not explain what he meant by "a deal." Whitmer, a Democrat who has become a favorite punching bag for the president, extended the state's social distancing guidance Thursday through May 15. However, she lifted many of the restrictions which had become a flashpoint for the protests, such as opening travel between primary and second homes and allowing residents to go boating and play golf. (Golf carts still remain verboten, though.)

Residents are still required to stay home as much as possible and practice social distancing in public, and non-essential businesses cannot open.

Though smaller than an earlier event known as "Operation Gridlock," Thursday's protests in Lansing, dubbed the "American Patriot Rally," were the most confrontational the country has seen yet as armed protesters packing shoulder-to-shoulder into the state capitol and shouting at legislators.

"Some of my colleagues who own bullet proof vests are wearing them," state senator Dayna Polehanki, a Democrat from Livonia, tweeted.

Demonstrators showed up on the sidewalk outside Whitmer's home last week, holding signs and exchanging waves with other protesters honking and shouting at the governor from a passing caravan of trucks, vans and SUVs.

Protesters were joined by David Clarke, the former sheriff of Milwaukee who oversaw a jail where water was kept from a mentally-ill inmate who died of dehydration. The Trump supporter-turned-right-wing provocateur addressed Michigan residents in the rain outside the capitol, encouraging them to "become defiant."

"How did they come up with this number of 6 feet?" Clarke asked, conflating state restrictions with the Trump administration's own guidance, which expired Friday. "I think they just pulled it out of their rear-ends."

Once under consideration to head the Department of Homeland Security, Clarke has called for the suspension of habeas corpus to arrest and detain indefinitely up to 1 million Americans he believes to be terrorist sympathizers in Guantanamo Bay prison.

The Washington Post and The New York Times have reported that some of the groups behind the shutdown protests are funded by right-wing organizations and conservative mega-donors, including massive Facebook groups run by zero-tolerance gun-rights activists. Facebook deleted the protest's event page, citing company policy about violating social distancing mandates.

On the capitol building's lower level, protesters demanded to access the floor of the legislature, shouting things like: "let us in" and "you cannot lock us out —this is the people's house." Some accused capitol police, who were taking temperatures per state guidelines, of being "redcoats."

Michigan Republican lawmakers are reportedly deliberating bills aimed at curtailing Whitmer's authority granted under an emergency powers act, including one that would revoke the governor's power to declare emergencies. Whitmer has threatened to veto the proposed legislation.

"I am not going to sign any bill that takes any power from me or any future governor," she told reporters. "The powers of the executive office are incredibly important especially in times of crisis where lives are on the line," she added.

Tom Norton, a Michigan Republican running for the Congress, implored the protesters. "We're the only nation that went to war with the South to free other men," he said. "Are we that same nation?"

Michigan has been one of the states most impacted by the coronavirus pandemic. The state now has more than 35,000 cases of COVID-19 with nearly 3,000 deaths, according to data from Johns Hopkins University.

Trump's reopening guidelines, revealed at a press conference last week, require states to record 10 to 14 days of declining cases and hospitalizations before they can lift stay-home orders. The president allowed national social distancing guidance to expire this weekend.