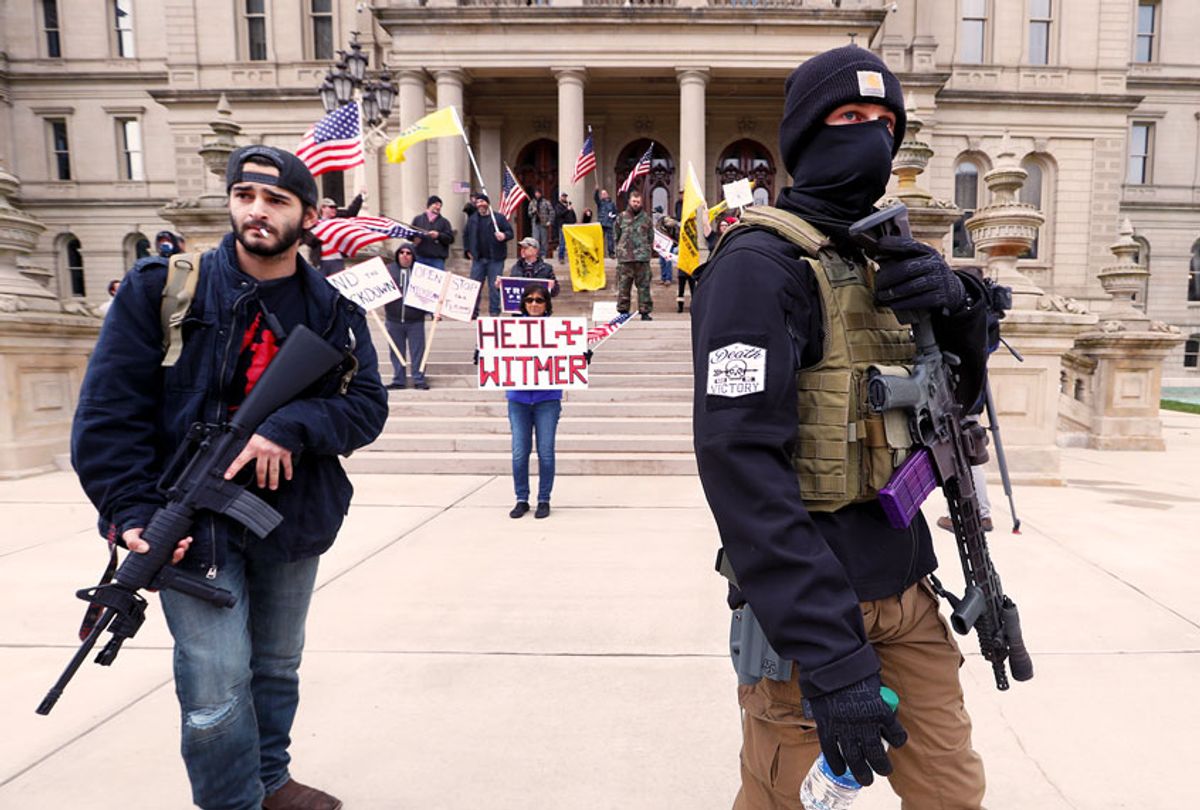 A network of pro-gun activists and numerous prominent Republican groups are behind at least some of the protests of coronavirus restrictions seen around the country in recent days.

Some of the largest Facebook groups calling for protests around the country are run by three far-right gun activists who believe the National Rifle Association (NRA) is too liberal, The Washington Post reported.

Ben Dorr, the political director of the fringe group Minnesota Gun Rights, and his brothers, Christopher and Aaron, organized about 200,000 combined members in Facebook groups aimed at states like Wisconsin, Ohio and New York by Sunday, according to The Post.

Though the groups typically assail the NRA for being "too compromising on gun safety," they have reportedly taken on an anti-social distancing bent since President Donald Trump backed the protests and called to "liberate" states like Minnesota and Michigan.

Many of the groups' members have pushed false information about the coronavirus, claiming that the threat was overhyped and disputing directives from public health officials to wear masks in public.

Facebook told the outlet that it had left many of the groups and planned protests up, because those states had not banned demonstrations. However, it did remove content related to planned protests in states with stricter rules like California and New Jersey.

"Unless government prohibits the event during this time, we allow it to be organized on Facebook," a spokesman for the company told The Post. "For this same reason, events that defy government's guidance on social distancing aren't allowed on Facebook."

But Zachary Elwood, a writer who tracks online disinformation, argued that Facebook had allowed a small group of users to promote falsehoods and potentially dangerous behavior.

"It's understandable that people are upset about the difficult situation we're in, but they're clearly being riled up by people with an obvious anti-government agenda," he told the outlet. "Facebook shouldn't make it so easy to do that."

The gun-rights group is just one of the coordinated efforts behind the protests former White House aides have called classic examples of "astroturf," or well-funded groups that organize supporters to make it look like a grassroots movement.

Some of the biggest protests that took place in Michigan were organized by the Michigan Conservative Coalition, which is run by a former Republican lawmaker and his wife, Meshawn Maddock, a member of Trump's campaign advisory board and the "Women for Trump" coalition.

The protests have been promoted by the Michigan Freedom Fund, which is run by Greg McNeilly. The operative is a longtime adviser to the family of Education Secretary Betsy DeVos who ran her husband's failed gubernatorial run in 2006.

Trump economic adviser Stephen Moore is also leading a "new coalition to fire up activists nationwide," according to the Associated Press. His group, FreedomWorks, is "holding weekly virtual town halls with members of Congress, igniting an activist base of thousands of supporters across the nation to back up the effort."

Groups like the right-wing Heritage Organization and the Koch-funded Americans for Prosperity are also funding efforts to oppose the shutdowns.

Trump, who has backed the protests despite being unable to name a single mitigation policy which he opposes, on Sunday declared the protesters to be "good people" and claimed that they just had "cabin fever."

Maryland Gov. Larry Hogan, a Republican, questioned why Trump had backed the protests when the targeted states are prevented from reopening under the White House's own guidelines.

"I don't think it's helpful to encourage demonstrations and encourage people to go against the President's own policy," he told CNN on Sunday.

Dr. Anthony Fauci, the director of the National Institute of Allergy and Infectious Diseases, warned that the push to reopen prematurely could "backfire."

"If you jump the gun, and go into a situation where you have a big spike, you're going to set yourself back," he told ABC News on Monday. "So as painful as it is to go by the careful guidelines of gradually phasing into a reopening — it's going to backfire. That's the problem."

Despite the highly coordinated protests, nearly 70% of Republicans and 95% of Democrats support a nationwide stay-at-home order, according to a recent Quinnipiac poll.

The protests' well-funded backers reminded many of dubious Tea Party protests from a decade ago.

"Recall that the 'Tea Party' protests a decade ago (organized in substantial part to undermine climate action) were in fact a massive astroturf campaign funded by the Koch Brothers and other dark money outfits," climate scientist Michael Mann tweeted.

Journalist Jeremy Scahill pointed out that the families of Betsy DeVos and her brother, Blackwater founder Erik Prince, "have a long record of financing the most dangerous right wing extremist individuals & causes in the country. They gave the seed money to the radical religious right, poured money into anti-choice groups & are funding the current coronavirus 'protests.'"

The latest push comes as Trump seeks to deflect criticism of his delayed and insufficient coronavirus response on governors.

"This redirected right-wing rage comes as Trump continues to change direction, hoping to find a pandemic response that makes him look like a leader," Salon's Sophia Tesfaye wrote. "Whether this so-called protest movement is orchestrated by his campaign or not — and that seems highly plausible — ultimately it's a PR stunt conducted on his behalf, meant to avoid a grim new reality as the bodies pile up."