A lynching without a rope — and in America, that’s nothing new

It used to be racist mobs. Now it’s racist cops. Watch Donald Trump pivot from 100,000 dead to "law and order" 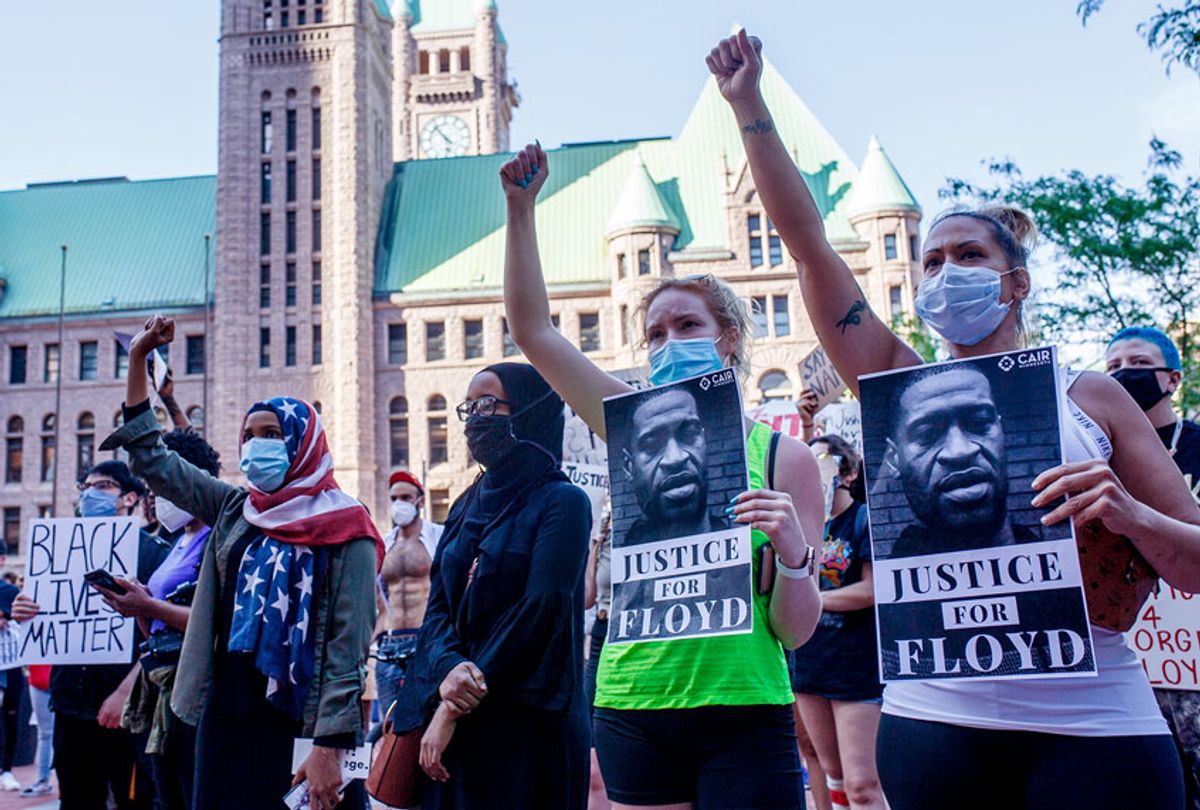 Protesters gather in a call for justice for George Floyd, a black man who died after a white policeman kneeled on his neck for several minutes, at Hennepin County Government Plaza, on May 28, 2020 in Minneapolis, Minnesota. (KEREM YUCEL/AFP via Getty Images)
--

Today, in 2020, it's George Floyd in Minneapolis, killed by a police officer kneeling on his throat during an arrest for the alleged offense of "forgery." Cell phone cameras captured the whole thing. Images of a handcuffed black man lying face-down on the street, under the knee of a white police officer, quickly flew around the world. Rioting broke out on Wednesday and Thursday nights. Stores were looted. Buildings burned. Early on Friday morning, fires burned at the Third Police Precinct in Minneapolis, where the four officers present at the death of George Floyd were assigned.

But long before there were cell phone cameras, there were black men and black boys, and there were cops who beat them or killed them, and there were riots in the streets of cities where the killings took place. What followed was as predictable as it was pathetic. Governors issued lamentations and called for "understanding" and "unity." Stores and buildings destroyed during the rioting were rebuilt. Occasionally, official "commissions" were empaneled to "study" the cause of the violence, and lame pledges were made that we've got to do better.

Most famous was the Kerner Commission, named after former Illinois governor Otto Kerner, which was supposed to study the causes for the multiple "race riots" that broke out during the infamous "long hot summer" of 1967. The Kerner Commission's report famously noted that the United States had devolved into "two societies, one black, one white — separate and unequal."

And then another year or two would go by, and another black man or a black boy would be beaten or killed, and another riot would break out. Let's see if any of this is familiar.

The Harlem riots of 1964, which expanded to include Bedford-Stuyvesant in Brooklyn and lasted for seven days and six nights, began after a 15-year-old African American boy named James Powell was shot and killed by a white police lieutenant, Thomas Gilligan, after an incident in the largely white neighborhood of Yorkville on the Upper East Side of Manhattan. Powell was shot twice in the presence of multiple witnesses, many of them his school friends from Robert F. Wagner Junior High School on East 76th Street.

The "Watts riots" (and/or Watts Rebellion) in Los Angeles began on Aug. 11, 1965, after an African American motorist, Marquette Frye, was pulled over by a California Highway Patrol motorcycle officer, Lee Minikus. The driver's brother went to a nearby house and got his mother, Rena Price, to come back to the scene of the arrest. She was scolding her son for driving her car and drinking, when someone shoved her to the ground. One of the officers hit Frye. Price jumped on the cop and other officers started kicking her. Another cop pulled a shotgun. People in the crowd started spreading the word that Frye had been beaten by the cops and his pregnant mother had been kicked. As the mother and her two sons were put under arrest, the crowd began yelling at the cops and throwing rocks. The ensuing riot would last six days and encompass the entire, largely black neighborhood of Watts. (Which in later years became known as South Central.)

The four-day-long Newark riots during the "long hot summer" of 1967 began after a black cab driver, John William Smith, was pulled over by two white cops, John DiSimone and Vito Pontrelli. Smith, who had used his turn signal before he turned in front of the parked police car, was arrested and beaten and driven to a nearby police precinct where he was charged with assaulting the officers and making insulting remarks. Residents of a nearby housing project saw the unconscious Smith being dragged inside the precinct, and a rumor spread that he had been beaten to death by the police. Residents attacked the precinct with rocks and bottles. The police responded wearing full riot gear, and it was on.

There were riots in 159 American cities in the summer of 1967, including Detroit, Cincinnati, Buffalo, Milwaukee, Toledo and Portland. Tens of millions of dollars in damage was done, and multiple people were killed during the riots.

Rioting broke out in cities across the United States the next year too, following the murder of the Rev. Martin Luther King Jr. in Memphis on April 4, 1968. There were riots in Washington, Detroit, Chicago, New York, Pittsburgh, Baltimore, Wilmington, Delaware, and Trenton, New Jersey. Again, there were multiple deaths and tens of millions in damage from looted stores and burned buildings. Entire neighborhoods in some cities were destroyed.

More recently, we had the L.A. riots of 1992, which broke out after four white police officers who had been videotaped beating a motorist named Rodney King were acquitted of the use of excessive force. The riots began on April 29 and lasted for six days. By the time control was restored, 63 people had been killed, more than 2,300 had been injured, and more than 12,000 had been arrested. I was living in Hollywood at the time. I could see buildings burning from my house.

On July 17, 2014, Eric Garner was choked to death on Staten Island by Daniel Pantaleo, a New York police officer. He was suspected of selling "singles," meaning unlicensed individual cigarettes. Eric Garner was black. Pantaleo was white. After a grand jury declined to indict Pantaleo that December, more than 50 demonstrations against police brutality were held around the country.

And then there were the riots in Ferguson, Missouri, in August of that same year, following the killing of 18-year-old Michael Brown, who was African American, by a white police officer named Darren Wilson. Rioting went on for several days and resumed in November after a grand jury failed to charge Wilson in Brown's death.

The next year there were seven days of rioting in Baltimore after 25-year-old Freddie Gray, an African American man, died after sustaining injuries to his neck and spinal cord as he was traveling in the back of a police van after his arrest. Two hundred and fifty people were arrested. More than 300 businesses were damaged by fire and looting. Six officers were charged with various offenses connected to Gray's death. None were convicted.

Do you see the connective tissue here? Black boys, or black men, are beaten or killed. It  happens over and over and over again. It just doesn't stop. It seems like yesterday that Martin Luther King was killed, that Rodney King was beaten, that Michael Brown was shot down and left in the street.

Why have there been so many "race riots," as the papers used to call them? Why did the cities burn?

Because even today black people are intimate with the same violence and death their ancestors suffered as slaves. They know the suffering of their ancestors because they have suffered as American citizens simply trying to eat in a restaurant or stay in a hotel or go to a school or vote in an election. White people killing black men and boys has a long and ugly history in this country. According to the Tuskegee Institute, there were more than 4,000 lynchings between 1882 and 1968. The vast majority of the victims, almost 3,500, were African Americans, usually men and boys. Lynching is still not a federal crime. The Senate passed a bill to make lynching a federal hate crime in 2018, and the House passed the Emmett Till Anti-Lynching Act in February of this year. There have been lynchings during many of our lifetimes. Neither bill has been signed into law.

George Floyd was lynched without a rope or a tree, but he might as well have been strung up from a streetlight. He died the same way so many other black men and boys have died. Like Eric Garner before him, he couldn't breathe.

There is a YouTube video making the rounds that shows a protester clad in black wearing a gas mask and carrying a black umbrella, breaking the windows of an AutoZone store in Minneapolis on Wednesday. Following right behind him is another protester, identically clad in black, wearing a white helmet and a face mask. This second person holds a Molotov cocktail and lights it with a lighter, preparing to throw it through the broken windows. That AutoZone store was the first building to burn in the Minneapolis riots.  Neither man's face is recognizable. It's not raining. The man is apparently carrying the umbrella so his face cannot be seen by overhead surveillance cameras.

There are unconfirmed reports that far-right "boogaloo" agents provocateurs have embedded themselves among the protesters in Minneapolis. There's not information to know whether that's true. The man breaking the AutoZone windows and the man lighting the Molotov cocktail in the video appear to be white.

Just watch how Donald Trump reacts to the unrest in Minneapolis and begins calling for "law and order." Watch him take the racist killing of a black man by white cops and turn it into a race war. This is the kind of opportunity he's been waiting for. There are already more than 100,000 dead on his watch. What's a few more?