With a deranged, racist reactionary in the White House, it's almost surprising this explosion took so long 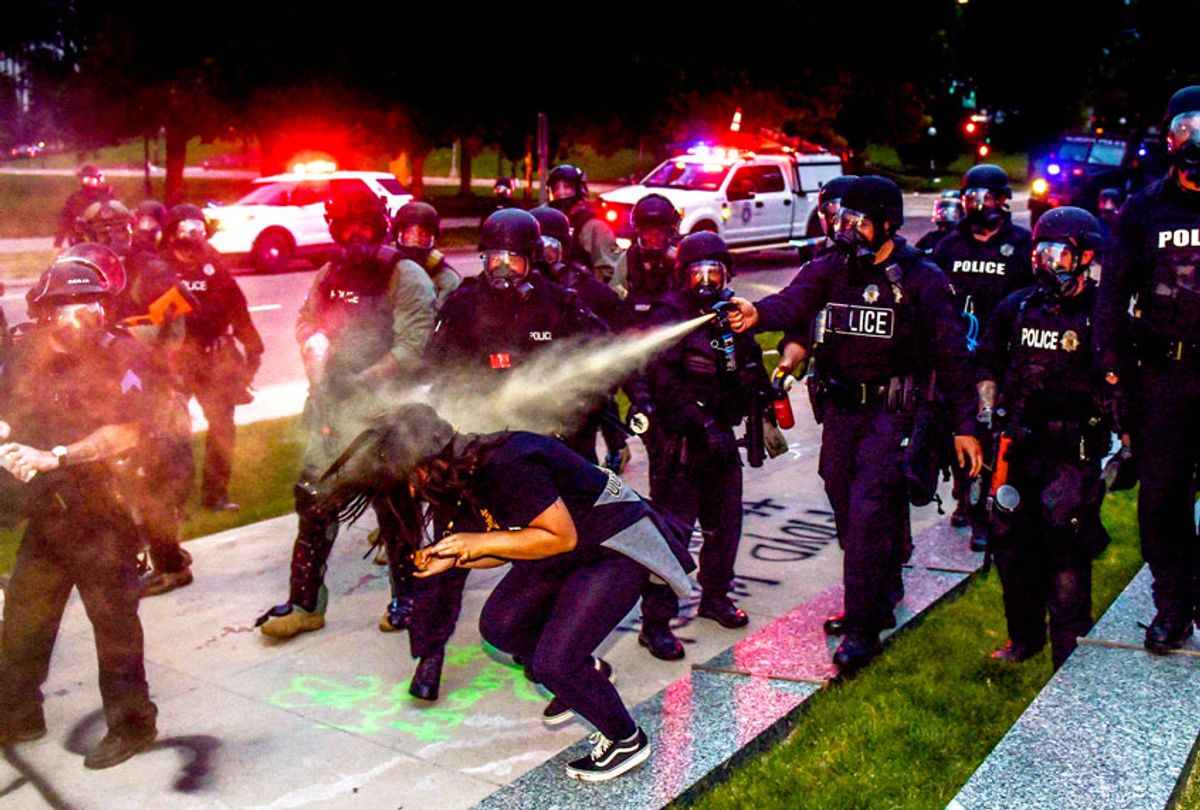 This is what it looks like when too many aggrieved Americans become deluded enough to elect a buffoonish, malicious, bigoted weirdo who tried to sell beef in Sharper Image mall stores. Yet it still manages to shock us, and rightfully so, when we observe how Donald Trump remains grossly out of his depth, incapable of even the most basic presidential responsibilities. Nearly four years into the job, his inability to carry out the paint-by-numbers traditions of benevolent leadership in the White House remains in critical focus as the nation falls further from greatness by the second, with chaos erupting all around.

It's no wonder that a man who thrives on chaos has franchised it nationally, before and especially since the murder of another unarmed American citizen at the hands of overzealous, racist cops who've been trained to assert lethal force as a first resort.

Trump didn't murder George Floyd, at least not literally. But his cruel whimsy has absolutely inspired the most violent reactions after the fact, and here's how.

Like it or not, history has proved that the president sets the tone for the entire country. When there's instability and derangement in the White House, it tends to be reflected in the streets. When the president vocally encourages knee-jerk, shoot-first reactionary responses to protests, rhetoric he has deployed for years, it's no wonder when cops mimic that same absence of character and restraint.

The commander-in-chief's words matter. His example matters. People listen to their president.

It seems like every day, Trump, an endlessly whining thug, indiscriminately exploits the bully pulpit to continuously troll around 55 percent of us, while weaponizing conspiracy theories and Fox News propaganda to inflame the other 45 percent. He insists he's a patriot, while despising any American who's not sufficiently loyal to him, from average citizens to government workers. In fact, he often punishes blue states by withholding federal aid. Why? Because they're not "Trump" states. He refuses to acknowledge that the people of New York City, the people of San Francisco, the people of Puerto Rico are just as American as his Red Hat cultists. Consequently, whenever he's backed into a corner, requiring a scapegoat, he blames his fellow citizens — everyone but himself. Women and people of color are his most frequent targets.

Trump's dead eyed, makeup-smeared face is permanently crammed into our living rooms, almost around the clock because it's impossible for him to shut the hell up. Ever. He can't stop his incendiary shrieking backed with unearned bragging — all-caps threats of "fire and fury" or crybaby lamentations about how unfair the world is to him, the billionaire president.

When Trump is not incongruously framing executive orders as hard-earned achievements, he's floating desperate trial balloons about everything from nuclear annihilation to recess-bully nicknames that, in his twisted noggin, are supposed to score some points. In reality, his blurts come off as unnerving and destabilizing shockwaves when issued as official proclamations by a person someone who's supposed to be the even-keeled leader of the free world.

By the way, for those of you who still support Trump: Would you ever agree to undergo surgery by a doctor who behaves like he does, or who's as unqualified as he is? Would you allow your kids' teachers to act like Trump? Would you board an airplane piloted by a Trump clone? If your answer is "no," why on earth would you give Trump himself the nuclear codes?

All the behavior we were taught as children about how to be honorable, truthful, civil members of society is routinely contravened by this gaudy, mendacious, nouveau-riche scam artist. Trump is an ongoing example of how not to behave in public, especially while basking in the glow of the world's brightest spotlight. Donald Trump is a petty, vain, small man with unsubstantiated self-confidence, undeserving of the presidency or any post of authority, short of a sneering game-show host who fires people. And that's evident on his Twitter feed and during press gaggles every damn day.

Therefore, the starting point for 2020 was one of tension and anger — of helpless, unsteady dread over what form of convulsive madness lurks in the next tweet, knowing the immense power he possesses, and knowing his utter lack of restraint in exercising that power. I've often compared observing the Trump presidency to leaning too far back in our chairs and nearly falling over. That queasy, adrenalized sensation of almost crashing but not quite. That's the default posture for a majority of Americans, now more than ever.

And then, stacked awkwardly on top of this rickety Jenga puzzle, came the pandemic, quickly followed by 40 million job losses and counting. Then there were the studies showing how the president's incompetence had worsened the death toll. That was followed by ridicule against common-sense measures such as social distancing — deemed the purview of "politically correct" libtards. Then, as if the injustice and instability weren't thick enough, along came another videotaped murder of a black man by a cop who had sworn an oath to protect and serve everyone in his jurisdiction, not just the white people. Sound familiar?

Throughout the past week, we've watched in horror as Trump's divisiveness and indecency boils over into the streets. We've watched as the president, true to form, obsessively wedges his ungainly bulk into the fray, inciting more authoritarian violence, primarily aimed at a race of Americans who have already suffered centuries of oppression, persecution, enslavement and scapegoating by people who look a lot like him.

When it comes to this seemingly inescapable national crisis, with its unrest and rage, one of the primary culprits is the man who spent part of Sunday night holed up in an underground bunker beneath the White House, ordering others to do his dirty work and then taking credit for it.

Again, the president sets the tone. The killing of George Floyd landed on top of a national powder keg overflowing with explosive potential. Yet rather than sitting down and listening for a change — rather than taking his job seriously — Trump can't stop flicking lit matches at the explosives, because he's incapable of doing anything else. Sorry, cable news people, he'll never be "presidential" — not because he doesn't want to be, but because he doesn't possess any of the basic values that define the adjective.

With his inflammatory remarks and repetitive brags, Trump is like a kid who shakes up an ant farm just to watch the ants freak out. That's exactly what he's doing now. He literally gets off on the chaos. Some men, they say, just want to watch the world burn. It's hardly breaking news to observe that chaos surrounds him, whether it's among his White House staff or among the millions of people beyond the fortified walls of the executive mansion.

When the history of this intolerably chaotic year is written, it must record that Trump exacerbated America's worst instincts — its racism, its violence, its selfishness, its sense of entitlement and more — by embodying these instincts himself, by injecting all of his toxic flaws into the very soul of America and selling this poison as "greatness."

The question now is whether the American people are motivated enough not just to remove him from office in November, but to do it in a way that guarantees no one else will pick up the makeup and hairspray and run with it — perpetuating his legacy of pain, chaos and cruel whimsy.