"Bad apples" are not the problem: America's police have a long legacy of brutal misconduct

I've been a police misconduct lawyer for 25 years. There are bad cops — but "good cops" almost always protect them 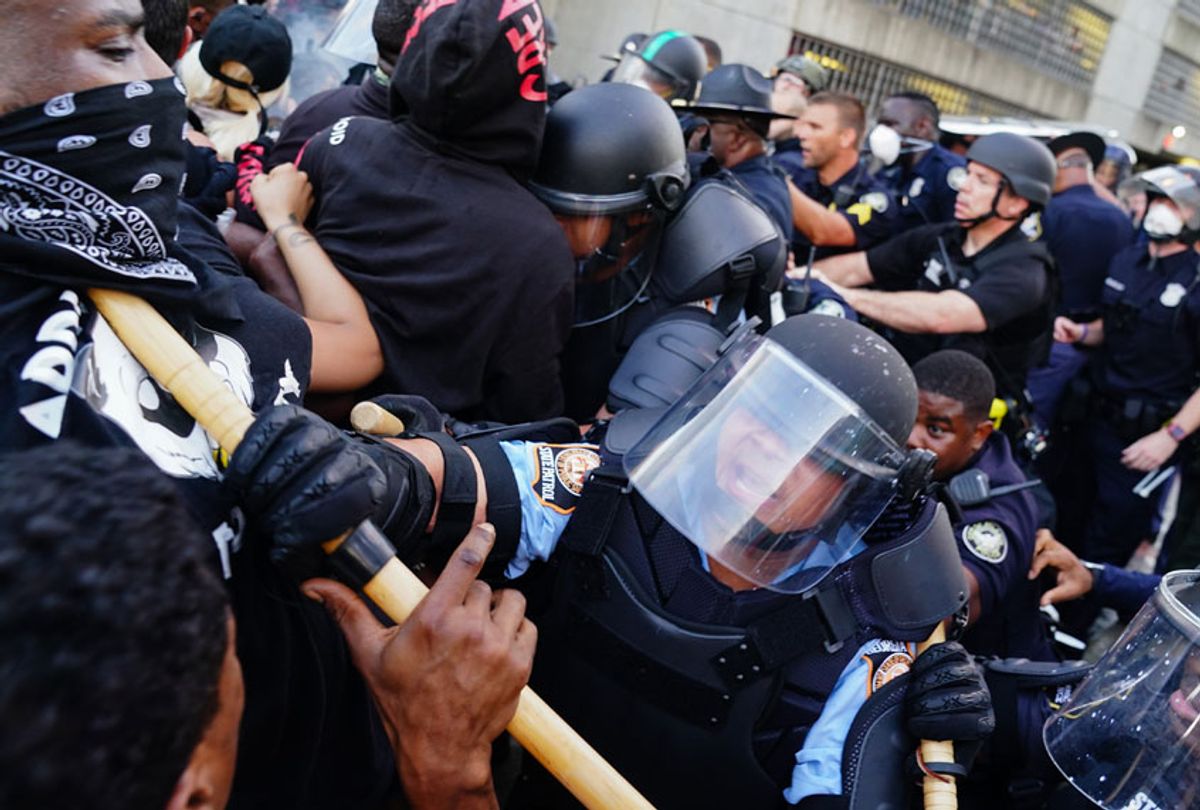 Police officers clash with protesters during a demonstration over the Minneapolis death of George Floyd while in police custody on May 29, 2020 in Atlanta, Georgia. (Elijah Nouvelage/Getty Images)
--

"The Osmonds," a Saturday-morning cartoon from the 1970s, always ended with a sickly melody that stays permanently in  my mind. "One Bad Apple" was about unrequited love (from girls, rather than cops). I knew the lyrics before I understood what "bad apple" meant, or, for that matter, police brutality.

Forgive me for comparing the nation's (and New York City's) unrest over police brutality to a cartoon. But the metaphor "bad apple" is not only a cliché, but so logically misplaced as to make it cartoonish. The typical argument is this: Let's remember that not all cops are bad, despite a few "bad apples." The problem with this argument, if it is an argument, is that it absolves the NYPD, the Minneapolis PD or any other police department for legacies of misconduct.

Consider the 2015 shooting of Walter Scott in North Charleston, South Carolina, and watch the entire video. The partner of officer Michael Slager, who shot his victim eight times, is Clarence Habersham, an African American officer. It is unclear whether Slager or Habersham dropped a gun near the victim after he was dead, but Habersham testified — despite all of the video evidence — that Slager was engaged in conflict with the victim.

While police misconduct derives from systemic racism and legacies from the evolution of slavery, that cannot be the only cause if African American officers have repeatedly been shown to commit perjury to back up their brethren. It cannot be true when the nation saw two black officers stop and Tase two college students, who happened to be black, driving through the protests in Atlanta, a city where most cops are African American. The mayor of that city, Keisha Lance Bottoms, promptly fired the officers involved — a rare, decisive action that New Yorkers have never seen.

"For example is not proof," the Yiddish proverb tells us, but the video in the Walter Scott case shows Habersham, the black partner, meekly going along with the routine. He saw what happened, and whether or not he planted the gun at the scene, did not report his partner for murder. The shooter, Slager, was indicted on state charges. After trial in state court ended with hung jury, the U.S. attorney brought federal charges to which Slager pled guilty, taking a sentence of 20 years. That, however, is a rare result. What is more significant is there would have likely have been no charges had a kid behind the fence not recorded the incident with a cell phone. Slager's African American partner, if he reported the shooting, did so because "the officer feared for his safety."

Look behind the fence: This weekend's unrest across the country was most certainly a result of white supremacy, but was a long time coming. When I arrived in New York in 1987, the exigent example of police misconduct was the acquittal of an officer in the shooting death of an elderly woman named Eleanor Bumpers. A few years earlier, it had the killing of Columbia student Edmund Perry (subject of the book "Best Intentions: The Education and Killing of Edmund Perry"), which influenced my decision to study law. The 1994 shooting of José Garcia inaugurated me into its practice. Six days of protest after Garcia's death — a case whose facts were unclear — resulted in no charges, but Mayor David Dinkins, a decent man, assembled the Mollen Commission. A few New Yorkers may remember that, but few can point to any good it did, no matter how assiduously it was documented.

In 1995, Officer Francis Livoti choked Anthony Baez to death after he finished playing football. The Bronx DA brought charges, and Livoti chose a bench trial, probably discerning that a Bronx jury would not excuse his conduct. Judge Gerald Scheindlin — husband to TV's Judge Judy husband and formerly of "The People's Court" — remarked during the trial, "There is a nest of perjury somewhere around here." Scheindlin nevertheless acquitted Livoti, although he was later convicted on an unrelated misdemeanor and served several months.

Then came the gruesome sodomy-by-plunger case of Abner Louima, brutalized by cops inside the NYPD's 70th Precinct in 1997. Federal prosecutors got an indictment, though in the middle of the the federal trial (where a criminal defendant may not unilaterally decline a jury), defendant Justin Volpe threw himself on the mercy of the court, likely in a deal to spare his partners. He mostly succeeded. Two of his co-defendants were acquitted. Another was convicted and served some time, but a media campaign resulted in his release. Volpe is still in prison. Do you remember?

Around the same time, I represented an older white woman who sued a detective from the 70th Precinct. That case settled, but it was as if the connection to a troubled precinct made no difference to the abuse invited upon my client. "One bad apple," after all.

The officers of the NYPD are tightly knit and protected by their unions. To my knowledge, no officer has ever come forward with evidence faulting another officer — and I have tried to find one. I've asked in depositions repeatedly: "Have you ever reported a fellow officer for misconduct?" The answer is uniformly "No," even if the NYPD Patrol Guide — not to mention federal civil rights law — requires it. So it would seem, in a superficial, logical way, that police misconduct does not exist.

Shortly after the Louima incident, I brought a case where a young African American woman was strip-searched without cause. She had been, as the arresting officer perceived it, disrespectful — that was her real crime. Though the traffic violation for which the officer arrested her for was thrown out, a female African American officer was designated to strip-search my client in a closet at the precinct, during which my client had to open her underwear.

When we questioned the strip-searching officer every answer she gave during her deposition was "I don't remember." She would not look either me or my client in the eye. It also happened that the arresting officer in that case had a rare Civilian Complaint Review Board finding of police misconduct. (Mostly, CCRB complaints are "unfounded," meaning the CCRB took no position on the action. Less often, officers are "exonerated," but rarely is a charge "indicated," meaning that misconduct actually occurred.) But that officer testified that he didn't even know about that finding, and I think he was telling the truth: We could find no record of any discipline, not even a loss of a day's vacation. (In that case, the partner of the arresting officer admitted that police followed a quota system: Two arrests and two summonses a week. I wish I still had that transcript — but what good would it have done anyone, then or now?)

Not long ago, I represented a young man on Staten Island, whom a police officer had whacked on the head with an 11-pound walkie-talkie. The Internal Affairs Bureau investigated the case, but brought no charges against the assaulting officer. Another officer behind the fence (as it were) conveniently misplaced the video of the assault on my client, which would easily have absolved him of criminal charges. For conveniently slipping the truth down the memory hole, that second officer lost a vacation day. My client, who lived in the projects in Staten Island, testified in his own defense and was found not guilty of assaulting the police officer, despite the disappearing video evidence. Justice prevailed, in large part because significant time elapsed between the event and the trial. The two officers involved lost contact with each other, and hadn't squared their stories before their testimony.

Then there was Amadou Diallo, shot 41 times on the street in February of 1999. His killers' trial was sent upstate to Albany by the appellate division because of bad pretrial publicity. I'm not saying that decision was wrong. Still, no judge allowed a change in venue to child abuser Joel Steinberg or grifter Sante Kimes, two defendants with tremendously bad pretrial publicity. An Albany jury acquitted all four officers in the Diallo case.

Then there was the killing of Sean Bell, on the morning of his wedding in 2006. All the officers involved were acquitted. And let us not forget the retaliation against "good apple" Officer Adrian Schoolcraft, who was forced into a psychiatric facility for speaking truth to power. Many more cases of the abuse of decent citizens – including African American undercover officer Desmond Robinson, shot and critically wounded in the subway by "friendly fire." But our collective memories have so many such things have been abandoned, buried, obliterated, repressed, suppressed, blanked or blotted out, consigned to oblivion, fallen between the cracks, removed from the contemporary discussion.

One case most of us still remember is the chokehold killing of Eric Garner in 2014, who told Officer Daniel Pantaleo, "I can't breathe." On Sunday, a reporter asked Mayor Bill de Blasio at a press conference whether he would stick to his promise to veto a bill currently before the City Council that would ban chokeholds. The mayor, even as he appointed a blue-ribbon panel of his aides to investigate the Floyd protests and associated property destruction, while touting supposed reforms of the NYPD on his watch, did not directly answer. Instead, he said, "Chokeholds are already illegal."

This mayor was elected as a liberal reformer who promised to end stop-and-frisk and other racist policing tactics. His answer is evidence that nothing will change. George Floyd will live in memory, but his cold-blooded killing will not get rid of any bad apples. If I had been a reporter at that conference, I would have followed up by noting: "Mayor de Blasio, killing citizens for suspected forgery is already illegal, too."

I feel I am naturally optimistic. I don't prefer jadedness or cynicism. But I expect this chronicle of police abuse will continue to reappear. Someone else will die in the heat of an officer's "fear for his safety," but now people resort to new clichés about apples, or the mantra (seen first on Twitter) ACAB, which stands for "All cops are bad." That acronym is perhaps too sweeping, but it holds some truth if almost all police officers — often the only witnesses to their brethren's misconduct — cannot be trusted to report the truth. This is not to say that all police officers are evil-hearted, but nearly all are complicit in a system that protects police officers at the expense of citizen complaints. To lie, let alone commit perjury, in defense of the thin blue line is obviously bad, as we all learned even before we watched Saturday morning cartoons. That badness will take more than a two-person panel of a lame-duck mayor's sidekicks, if it is ever to change.

Gregory Antollino is a New York attorney who has worked on discrimination and police misconduct cases since 1995. He is currently lead counsel in Zarda v. Altitude Express, a case now before the U.S. Supreme Court that questions whether gay men and lesbians are protected under Title VII of the Civil Rights Act.