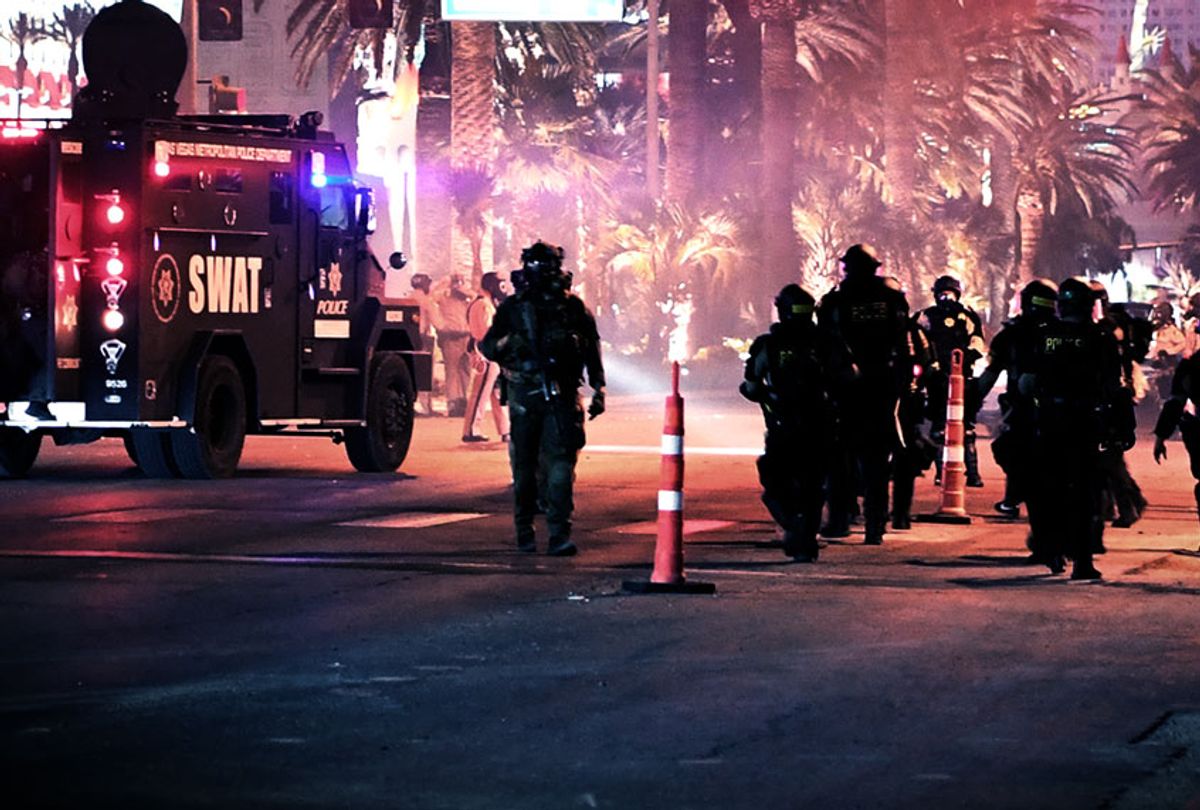 Prosecutors said three men with military experience and ties to the far-right "boogaloo" movement, which aims at inciting a second American Civil War, plotted attacks against individuals protesting the death of George Floyd and coronavirus restrictions.

Federal prosecutors charged each of the men with conspiracy to damage and destroy by fire and explosive and possession of unregistered firearms. They were separately charged with terrorism, conspiracy and explosives possession in state court, according to the Associated Press.

"People have a right to peacefully protest. These men are agitators and instigators. Their point was to hijack the protests into violence," Nicholas Trutanich, the U.S. attorney in Nevada, told the AP.

"This type of planning and intent on causing mayhem is terroristic and will not be tolerated," Las Vegas District Attorney Steve Wolfson told the AP.

Authorities were first alerted to the plot after a confidential informant met with two of the men in early April at an anti-lockdown rally, according to the federal complaint. Lynam, who was armed, allegedly told the informant that the group "was not for joking around and that it was for people who wanted to violently overthrow the United States government."

Parshall and Loomis later "discussed causing an incident to incite chaos and possibly a riot, in response to the death of a suspect," referring to Floyd, at a May 27 meeting, according to the complaint.

Loomis said he wanted to firebomb a power substation, according to the complaint, but Lynam suggested exploiting the protests to attack a fee station on federal land near the Hoover Dam or a U.S. Forest Service station. The informant told authorities that Parshall and Loomis' "idea behind the explosion was to hopefully create civil unrest and rioting throughout Las Vegas."

The men wanted to use the Floyd protests "to hopefully stir enough confusion and excitement, that others see the explosions and police presence and begin to riot in the streets out of anger," prosecutors said.

"Boogaloo" is a "term meaning the second Civil War that the right-wing paramilitaries and other extremists are hoping for and lusting after right now," journalist David Neiwert, who tracks alt-right movements, told Salon's Chauncey DeVega. "These right-wing extremists want to replace America's constitutional democracy with authoritarian right-wing rule. Online, these right-wing extremists spend a great deal of time talking about the 'boogaloo' and killing federal law enforcement agents. They also fantasize about societal breakdown and killing their neighbors for supplies. These people are very serious about their violence."

The arrests come as federal authorities warned that far-right extremists were trying to exploit the protests in order to stoke violence.

The Department of Homeland Security on Tuesday issued an "intelligence note" warning that "some violent opportunists have become more emboldened following a series of attacks against law enforcement during the last 24 hours nationwide."

"This could lead to an increase in potentially lethal engagements with law enforcement officials as violent opportunists increasingly infiltrate ongoing protest activity," the document said, citing "several incidents" which involved targeting police and "shooting into crowds of protestors."

At least one "violent opportunist" drove into a group of protesters in Asheville, N.C., and fired "several shots into the crowd before speeding away," the document said.

Though President Donald Trump and Attorney General William Barr have sought to blame Antifa, the anti-fascist movement, for violence surrounding some of the protests, the FBI's Washington field office has found no evidence "indicating Antifa involvement/presence" at protests in the area, according to a document obtained by The Nation.

But the same document warned that members of a far-right social media group "called for far-right provocateurs to attack federal agents" and "use automatic weapons against protesters."

Another DHS memo said that "a white supremacist extremist Telegram channel incited followers to engage in violence and start the 'boogaloo' — a term used by some violent extremists to refer to the start of a second Civil War — by shooting in a crowd."

Twitter earlier this week shut down a fake Antifa account which called for violence after linking it to a white nationalist group.

Trump has said nothing about the mounting reports of far-right extremists exploiting the unrest. However, he has vowed to label Antifa a terror group, even though it is a decentralized movement made up of many autonomous groups and individuals. Experts say such a move would be unconstitutional.

"It's ANTIFA and the Radical Left," Trump insisted on the same day the extremists in Las Vegas were arrested with firearms and explosives. "Don't lay the blame on others!"