With "Douglas," Hannah Gadsby is a comedy pioneer with her whimsical, meticulous show about autism

The self-proclaimed Tasmanian lesbian comic is back to explain her full comedy set, sexism, and Louis C.K. 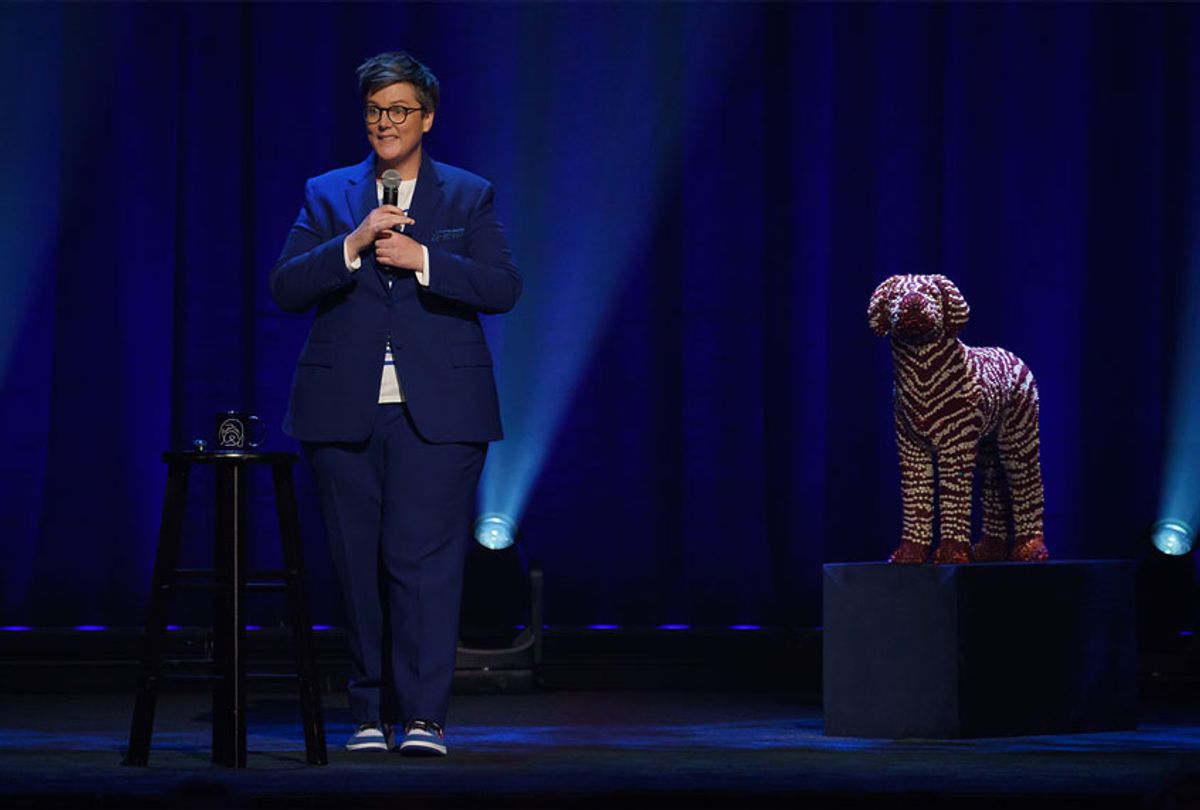 Hannah Gadsby is as surprised by all of this as you are. It's been two years now since her American breakthrough "Nanette" detonated on Netflix, seemingly from out of nowhere, making her the biggest nonneurotypical Tasmanian lesbian standup star in the world. "Nanette" was a piece entirely of the moment in which it was born, a statement that, "Look, I am angry" from an admittedly "quiet gay" at a collective turning point in our culture's relationship with the patriarchy.

At once self-deprecating and defiant, Gadsby's comedy was a slow-burn masterpiece. Few artists would even attempt to use observational bits about small town life and drinking tea to ignite a furious, candid demand for accountability in the face of homophobia and sexual assault, but Gadsby did just that. And she did it in the most meta of manners, framing her comedy performance around the idea of quitting comedy. So what does someone like that do for a follow-up?

"I'm part of the problem now," Gadsby cheerfully announces early on in "Douglas," her latest special. "I had no plans to make it in America. This," she says, bewildered, "was not on my agenda." For an artist whose work explores the experience of existence "in the margins," Gadsby is now — by at least certain conventional metrics — a mainstream success.

What that means for us as an audience is that "Douglas" simply can't provide the bracing shock of discovery that "Nanette" did; it is instead by Gadsby's own admission her "difficult second album." Yet if you can accept it on those terms, it stands up sturdily on its own. In "Nanette," she declared that "I just needed my story felt and understood," announcing herself as "a broken woman who has rebuilt herself." In "Douglas," she gets to play more with that rebuilt side.

"Douglas" is a decidedly more whimsical affair, as Gadsby shares the stage with a dog made of crayons and offers unique commentary on classical Christian art, with its lactating virgins and tiny lions. It is also still pissed off as hell and determinedly meta.

Breaking one's own fourth wall is not a new convention. Gadsby's insistently uncategorizable, multilayered work invites inevitable comparison to Mike Birbiglia, whose storytelling defies the conventional image of a stand-up comic and who can pause within the telling of a humiliating story to observe that, like the audience, "I know . . .  I'm in the future also." She also remains a kind of one woman Penn and Teller, constantly calling our attention to her process and somehow making that a revelatory tactic a trademark sleight of hand. For "Douglas," Gadsby devotes the first 15 minutes — a long time! — of her one hour and 12 minute special to laying out in great detail exactly what she will be discussing for the next hour. She tells us when she will be likable and when she will not, when she will do a mic drop that is actually just a gentle placing the mic down of the mic and how we might want to buckle up for the stuff about anti-vaxxers and a single Louis C.K. joke. "It happens very late in the show. So late you will have forgotten I told you to expect a Louis C.K. joke," she announces, with the same confidence one might ask, "Is THIS your card?" And then she proceeds to achieve exactly all of those things. Conventional comics lean on the callback; Gadsby distinguishes herself by pioneering the call-forward.

She also does it by making this, as she says, a show about autism. There are not a lot, to my knowledge, a lot of stand-up specials about and by people on the autism spectrum. I definitely can't think of any told from the perspective of a Tasmanian lesbian. Or one that begins the journey of self discovery via a conversation with a stranger in a dog park about a peculiarly named part of the female anatomy. All the while, Gadsby is cleverly disarming the audience — in particular the men — the better to volley her well-aimed jabs at everyday sexism, rape culture, and good old-fashioned, American ignorance. Oh, did you think this was just going to be lighthearted observations about "Where's Waldo?" She even warned us right at the beginning that it assuredly would not.

If the show has an Achilles heel (located nowhere near the Pouch of Douglas, we have now all learned), it's that Gadsby's meticulous teeing up of her material can at times feel like a convenient deflection of its more manipulative moments. Gadsby tells us she's succeeded doing "trauma in the context of comedy;" she shushes us not to take the "bait" and hoot when she says something provocative. It seems almost churlish to then feel like she gets to have her indignation and self-righteous applause for it. Gadsby knows full well the audience isn't going to . . .  not cheer when she lays herself bare describing her progress from "a profound sense of isolation" to being someone who can "disrupt your confidence"? She knows the cue. There is a collective affirmation that yes, Hannah, yes, you did disrupt our confidence! You said you would and you did!

But to recognize some of the shortcomings of "Douglas" is not at all to disregard it, or the uniquely brilliant woman behind it. We have only just begun a Pride month unlike any other in our lifetimes, one in which a "quiet gay" seems a particularly well-equipped interpreter for a time in which everyone is grappling with their own versions of isolation and challenges to communication. Gadsby is no everywoman, her worldview is entirely her own. That's why she stands out, at once fiercely and quietly, like a tiny, perfect lion.