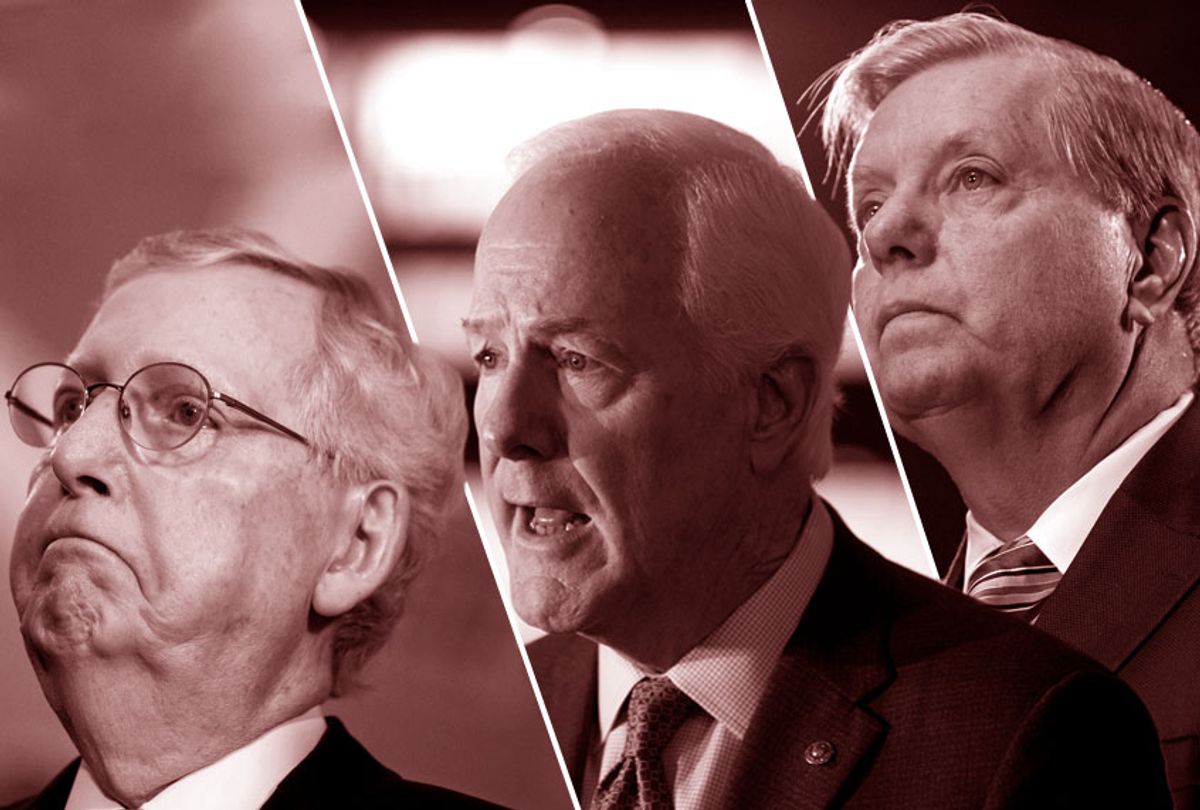 First proposing, "It's a question as obvious as it is critical: How will the trio of crises—the pandemic, the economy, the demands for racial justice—affect the 2020 race for the White House," the columnist said it will be a major factor this election cycle and that is not good news for Republicans.

"History has some powerful answers to this question—and they leave Republican partisans with a strong case of agita," he wrote. "As a general proposition, when the nation is in a state of crisis, things do not go well for the President's party. When a war becomes a quagmire (Korea in '52, Vietnam in '68), when the economy craters (1980, 2008), voters look for a different leader. Far from a 'retreat to safety' or a 'rally round the flag' sentiment, there is an instinct to show the people in charge the way to the exit."

As Greenfield notes, the Republican Party won't be an exception in 2020.

"This year, the Senate Republicans hold a majority, again making them vulnerable to any vote to toss out the status quo. But don't voters make different choices when they vote for a President and then a Senator? Once upon a time, yes," he explained. "The potentially awful news for Republican Senate candidates is another historical trend: the increasing link between votes cast for a Presidential contender and votes cast for senators, which makes it harder to create distance from an unpopular incumbent."

"Turn to the Senate map, and it's clear how these factors combine to produce a migraine for any strategist looking to hold the Senate for the Republicans. Not that long ago, Republicans were a good bet to hold the Senate even though they held 23 of the 35 contested seats. Only two—Cory Gardner of Colorado and Susan Collins of Maine—were in states that Hillary Clinton carried in 2016. Even with Arizona and North Carolina as potential Presidential battlegrounds, that left at most four vulnerable Republicans," he continued. "And with Alabama Democrat Doug Jones a very likely loser, there was little breathing room for Democrats to pick up the three net seats they'd need to capture the Senate, assuming Biden wins in November."

Greenfield goes on to point out that handful of Senate seats in normally GOP strongholds may also be in play — in part because of Republican senator's support for the unpopular president.

"Now—at least measured by polls—a passel of states now seem within Biden's reach, many of them with incumbent Republican senators up for re-election, " he elaborated. "He's even in Georgia, where both incumbent Republican senators will be on the ballot; he's even in Iowa, where Joni Ernst is up for re-election. And if Biden is going to make a real fight in Georgia and Iowa, that means a get-out-the-vote effort that will bring a lot of Democrats to the polls there."

Equally important, he notes, is that it is difficult for incumbents to distance themselves from Trump over fears he will turn his base against them — meaning they are in a trap of their own making.

"Now put yourself in the position of one of these endangered incumbents, especially in states where Trump is particularly unpopular, like Colorado or Maine. If you're tempted to create some distance from President Trump, to assert your independence, you're facing one pesky obstacle: The Republican Party is effectively now a wholly owned subsidiary of Trumpworld, and independence from the President is a trait that all but guarantees instant and massive pushback from your own party," he explained. "You have only to gaze around the Senate chamber, where ex-Senator Dean Heller, ex-Senator Jeff Flake, and ex-Senator Bob Corker sat, to see what happened to colleagues who did not tug the forelock with sufficient enthusiasm. If you're Gardner, or Collins, the temptation to confront the President's behavior has to be weighed against the likely outrage from the party apparatus whose help you need in an election, to say nothing of the populist media that animates your rank-and-file voters."

'If you are playing the percentages, the odds say that if the President cannot persuade a rattled, fretful electorate to stay with him, he will take the Republican Senate down with him," Greenfield concluded.

You can read his complete analysis here.