We've reached a turning point in the Trump era. The 2020 campaign is in the streets and he's losing 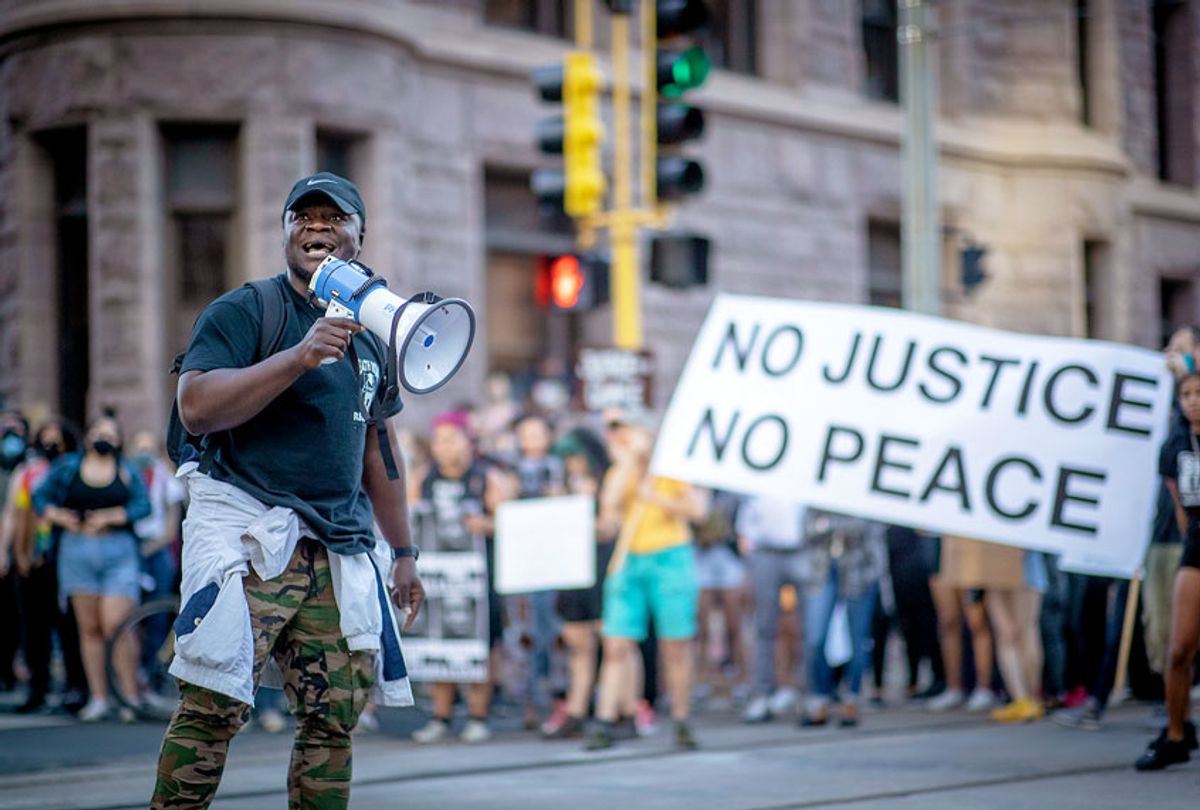 David Swaray, also known as Davey Dave, joined hundreds of protestors joined at the Government Center to support CAIR-Minnesota to call for the arrest of the police who killed George Floyd. (Elizabeth Flores/Star Tribune via Getty Images)
--

They almost always begin to right wrongs: illegitimate wars; decades of discrimination on the grounds of gender or racial or sexual identity; killings of innocents by police or gun-toting lunatics; oppression by governments wielding unequal laws; the deeply embedded legacy of centuries of racism.

They are imperfect. Arising out of rage, they can be unfocused, inchoate, contradictory. Protesting violence, they often involve violence. Protesting oppression, they sometimes oppress by destroying public spaces, small businesses, even entire neighborhoods.

But sometimes they are large enough and powerful enough and righteous enough to bend the arc of history. We are in such a moment. There has been a turning. A protest against the murder of a black man by police in Minneapolis has become a movement. Demonstrations, which began almost two weeks ago, are ongoing. They are huge. They are nationwide. They are peaceful. They show no signs of stopping.

Among the extraordinary things about this moment is the fact that every single person who has taken to the streets to demonstrate is risking his or her life. People who only days ago were huddled inside their homes, afraid of a virus that has taken in excess of 110,000 lives in this country, are putting on their face masks and gathering by the tens or even hundreds of thousands, unafraid of the virus or the forces arrayed on the streets against them. They are protesting the death of a man who should not have had to die, and they are protesting the man who seemingly gave permission for him to be murdered by the intolerance and racism he has openly promoted for more than four years.

If we had any doubts that our fellow citizens would turn out to vote in November because they would be afraid of the virus or intimidated by attempts to block their votes, we have our answer. More people will turn out to vote, not less, and this has Trump very, very worried.

The show of courage on the streets has frightened Trump and his allies in the Republican Party. If you have any doubts, all you have to do is watch the scene of Republican senators scurrying away from MSNBC reporter Kasie Hunt on Capitol Hill when she asked them to comment on Trump's disgusting and disreputable photo-op at St. John's Church on Monday.

Trump has turned Washington into an armed camp. He has built a three-mile-long wall around the White House and cowered in a basement bunker as protests grew on the streets outside. But Trump's threat to use active-duty soldiers to suppress dissent has encountered some profound pushback from an unexpected source: the United States military.

It began with a statement by former Secretary of Defense James Mattis in reaction to the use of force, including National Guard soldiers, to clear peaceful demonstrators from a street near the White House so Trump could make his now-infamous "walk" to St. John's Church for his Bible-waving photo-op. "I have watched this week's unfolding events, angry and appalled," Mattis wrote in The Atlantic:

When I joined the military, some 50 years ago, I swore an oath to support and defend the Constitution. Never did I dream that troops taking that same oath would be ordered under any circumstance to violate the Constitutional rights of their fellow citizens — much less to provide a bizarre photo op for the elected commander-in-chief, with military leadership standing alongside. The protests are defined by tens of thousands of people of conscience who are insisting that we live up to our values — our values as people and our values as a nation. We do not need to militarize our response to protests. We need to unite around a common purpose. And it starts by guaranteeing that all of us are equal before the law.

And then something extraordinary happened. Mattis' clarion call was joined by more senior military figures, beginning with Secretary of Defense Mark Esper, who had been the object of strong criticism for standing next to Trump during his Bible photo-op. Esper held a press conference at the Pentagon on Wednesday and announced that he was against invoking the Insurrection Act, which would (hypothetically) authorize the deployment of active-duty military on the streets of America. Trump is said to be very, very unhappy with Esper and reversed his order for elements of the 82nd Airborne Division to return to their base in North Carolina. By week's end, however, Esper had prevailed, and the 82nd was on the way home.

Retired Adm. Mike Mullen, who served as chairman of the Joint Chiefs of Staff under George W. Bush and Barack Obama, was next. He wrote a piece for The Atlantic entitled, "I cannot remain silent."

"It sickened me yesterday to see security personnel — including members of the National Guard — forcibly and violently clear a path through Lafayette Square to accommodate the president's visit outside St. John's Church. I have to date been reticent to speak out on issues surrounding President Trump's leadership, but we are at an inflection point, and the events of the past few weeks have made it impossible to remain silent.

Whatever Trump's goal in conducting his visit, he laid bare his disdain for the rights of peaceful protest in this country, gave succor to the leaders of other countries who take comfort in our domestic strife, and risked further politicizing the men and women of our armed forces."

Retired General John R. Allen weighed in next, writing ominously in Foreign Policy magazine, "The slide of the United States into illiberalism may well have begun on June 1, 2020. Remember the date. It may well signal the beginning of the end of the American experiment."

More retired generals weighed in later in the week, including two former chairs of the Joint Chiefs, Martin Dempsey and Richard Meyers. Both were critical of Trump's handling of protests and opposed the use of the military to suppress dissent.

But even more extraordinary than the retired officers who spoke out was the letter from the current chairman of the Joint Chiefs, Gen. Mark A. Milley, which was leaked to conservative pundit Bill Kristol on Thursday. Milley is said to have had a contentious meeting with Trump in the Oval Office on Monday before joining him in his infamous "walk" down the street cleared by police and National Guard soldiers. According to David Ignatius of the Washington Post, Milley, "whose temper can match Trump's...was vocal in reiterating his advice to the president against mobilizing troops, according to three knowledgeable sources who spoke on the condition of anonymity."  That is Washington-speak for "they were yelling at each other."

Sent to all of the other chiefs of staff for the Army, Navy, Air Force, Marines, Coast Guard, National Guard and commanders of combatant commands, Milley's letter is unlike anything I have seen, and I've been around the military since I was born in an Army field hospital in occupied Japan in 1947.

He reminded everyone in uniform of their oath to support and defend the Constitution. I've never seen that done before. All service members take the same oath, but they don't go around reminding each other about it. Milley wrote of the Constitution, "This document is founded on the essential principles that all men and women are born free and equal, and should be treated with respect and dignity. It also gives Americans the right to freedom of speech and peaceful assembly. We in uniform — all branches, all components, all ranks — remain committed to our national values and principles embedded in the Constitution." He went on to note specifically that the National Guard "is operating under the authority of state governors."

For a military man, this comes close to a call for insurrection. Milley's message is written in a code that everyone in uniform will understand implicitly. By reminding every member of the military that the soldiers currently deployed on the street around the country are not there under the authority of the president, and by reminding them of their oath to the Constitution, he is telling them that the military will not be carrying out any un-American orders issued by Donald Trump. Late Friday, Secretary of Defense Esper disarmed the National Guard doing riot duty in Washington, ordering them to turn in their weapons and ammunition.  He also ordered all active duty troops amassed outside the capital earlier in the week by the White House to be sent home.  He issued both orders without consulting the White House.

These generals are not politicians, but all their statements are as political as any I've ever seen by senior officers, retired or active duty. It's the equivalent of lining up howitzers on Pennsylvania Avenue and aiming at the White House.

I'll bet Trump rues the day he appointed "Mad Dog" Mattis as secretary of defense. They don't go out and make statements like this without talking to one another. Mullen and Mattis were said to have been aware of Milley's confrontation with the president at the time they wrote their articles on Tuesday and Wednesday. Milley and his fellow generals and admirals are giving a clear sign that the military leaders are turning against Trump. Colin Powell will reportedly be next, in an appearance on one of the Sunday morning shows.

The military is the most reliably conservative institution this country has. But inside the military establishment, the signals are being sent. They have announced that they are more reliable as defenders of the rights of their fellow citizens than the police. Without stepping over the line into insubordination, they have made it as clear as they can that their loyalty isn't to the president. It's to the Constitution.

I don't think we have to worry about the military following illegal orders from Trump. At least for now, they're on our side.