Hurricanes disproportionately harm communities of color. Why does TV news ignore that fact? 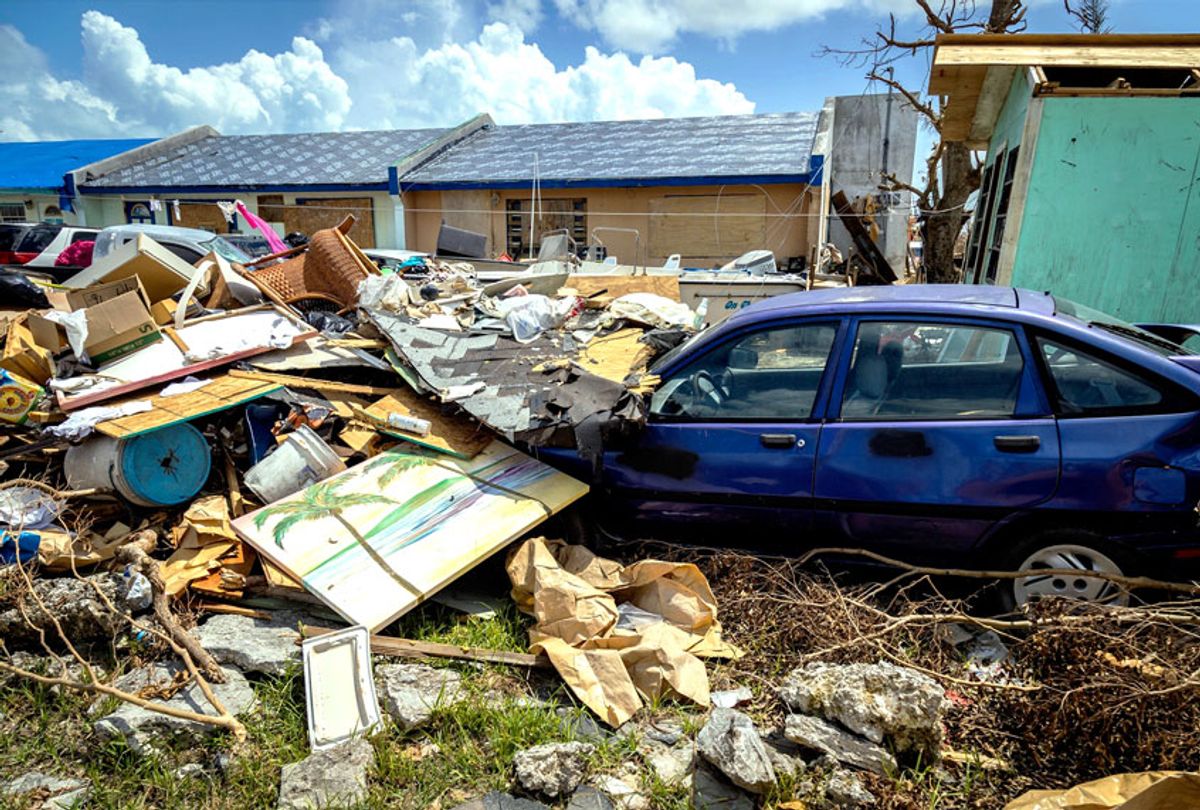 Debris lies around a damaged home in the aftermath of Hurricane Dorian on September 10, 2019 in Grand Bahama, Bahamas. The official death toll has risen in the time since to 50 people, but authorities have cautioned that number is likely to rise significantly as workers make their way through the ruins. (Alejandro Granadillo/Anadolu Agency via Getty Images)
--

When Hurricane Florence slammed into southeastern North Carolina in September 2018, the worst-hit communities were already dealing with a litany of hazards: poverty, pollution from coal ash ponds and lagoons filled with livestock waste, chemicals in the drinking water, not to mention many were still in the process of rebuilding after Hurricane Matthew tore through two years earlier. According to Naeema Muhammad, organizing director of the North Carolina Environmental Justice Network, people in these largely black and brown communities in cities like New Bern and Lumberton, and rural towns like Faison, struggled to evacuate.

"People are pretty much left on their own to try to navigate out of danger," Muhammad told Grist. When the flooding came, it flushed coal ash, animal waste, and human waste from wastewater treatment plants into the waterways, which spilled over riverbanks and into the streets. "People had to navigate through that water," she said.

If you had been following coverage of the hurricane on one of the major nightly news shows at the time, you might have missed this story entirely. That's because not a single segment that aired on ABC's World News Tonight, the CBS Evening News, or the NBC Nightly News reported on the disparate impacts Florence had on marginalized communities, according to a new analysis by Media Matters.

The media watchdog nonprofit analyzed 669 segments produced by those shows from 2017 to 2019 covering seven hurricanes, including Florence, and one tropical storm. Not one addressed the fact that these extreme weather events did not affect everyone in their paths equally — that the devastation they brought to poor communities and communities of color was far worse — despite ample researchhighlighting this disparity.

"It does not come as a surprise at all," Muhammad said of the study. "We have a lot of issues going on in the floodplain areas that do not get addressed by the media. It's mainly because of the faces in those areas," which are predominantly black, Native American, and Latino.

Marginalized communities already have and will continue to suffer disproportionately from the extreme weather that becomes more common with climate change, from hurricanes and flooding to heat waves and wildfires. This is not just because they are more likely to live in the floodplain or the line of fire, although that is part of it, and is often the result of racist practices like redlining. Low-income and minority communities are also more likely to live in poor-quality housing and to not have the means to evacuate, rebuild, or relocate. As the Media Matters report states, "These events expose vulnerabilities stemming from historic and systemic inequities, but they too often go unexplained — partly because broadcast TV news fails to even do the minimum of reporting on who is being harmed the most, let alone delving into why some communities are being disproportionately affected."

By contrast, PBS Newshour produced nine segments over the same time period that specifically addressed the disproportionate impacts hurricanes had on marginalized communities. While they represented only about 4 percent of the public broadcaster's total hurricane coverage, the segments were at least substantive: One highlighted how undocumented families in Texas who did not qualify for disaster aid were faring in the aftermath of Hurricane Harvey. Another focused on black residents in a neglected North Carolina public housing project who had no evacuation plan during Hurricane Florence.

Juan Declet-Baretto, a social scientist with the Union of Concerned Scientists who researches climate vulnerability and environmental justice, warned about the dangers of the media not visiting these communities and talking to residents about what they experience. "It creates a huge blindspot in people's perception, public perception and policymakers' perception," he told Grist. "It sends a message that there are some people in society that we collectively deem that they are not important, that it is not worth saving their lives."

Media Matters found that this blind spot extends beyond extreme weather events to other environmental justice issues. When it comes to the novel coronavirus, the organization found that the same three corporate broadcast news shows failed to report on the connection between air pollution and the high COVID-19 death rate among people of color, especially black people.

Last Saturday morning, Muhammad said she woke up and lay in bed feeling angry. Over the previous few days, mass protests had spread to major cities all over the country in response to the police killings of George Floyd in Minneapolis and Breonna Taylor in Louisville, Kentucky, and the fatal shooting of Ahmaud Arbery by two white men while he was out for a jog in Brunswick, Georgia. "I'm angry that this policeman could so casually murder somebody in plain view, in broad daylight, as if it was nothing," said Muhammad, referring to Floyd's killing.

But the ongoing demonstrations are not about a few specific violent incidents; they are about the enduring structural racism and everyday violence inflicted on black Americans, of which environmental injustice is one manifestation.

"And then I said, man, on top of that, we have all of this environmental degradation in our communities, where people feel like they got a right to dump crap that they don't want onto poor communities, and predominantly people of color, without a thought, and without being held accountable for the damages that they've caused," Muhammad continued.

Muhammad urged the media to try harder to get to the root of the story, to go into impacted communities and talk to folks. "The evidence is already there," she said. "If you sit there and hear the story and look around, people are not making this shit up. It's real. People are living this stuff every single day."

While the protests rage on, the COVID-19 pandemic continues to take more lives every day, and an active Atlantic hurricane season is in the forecast.