Says one observer, "Structural racism is baked into every community institution, into every neighborhood" 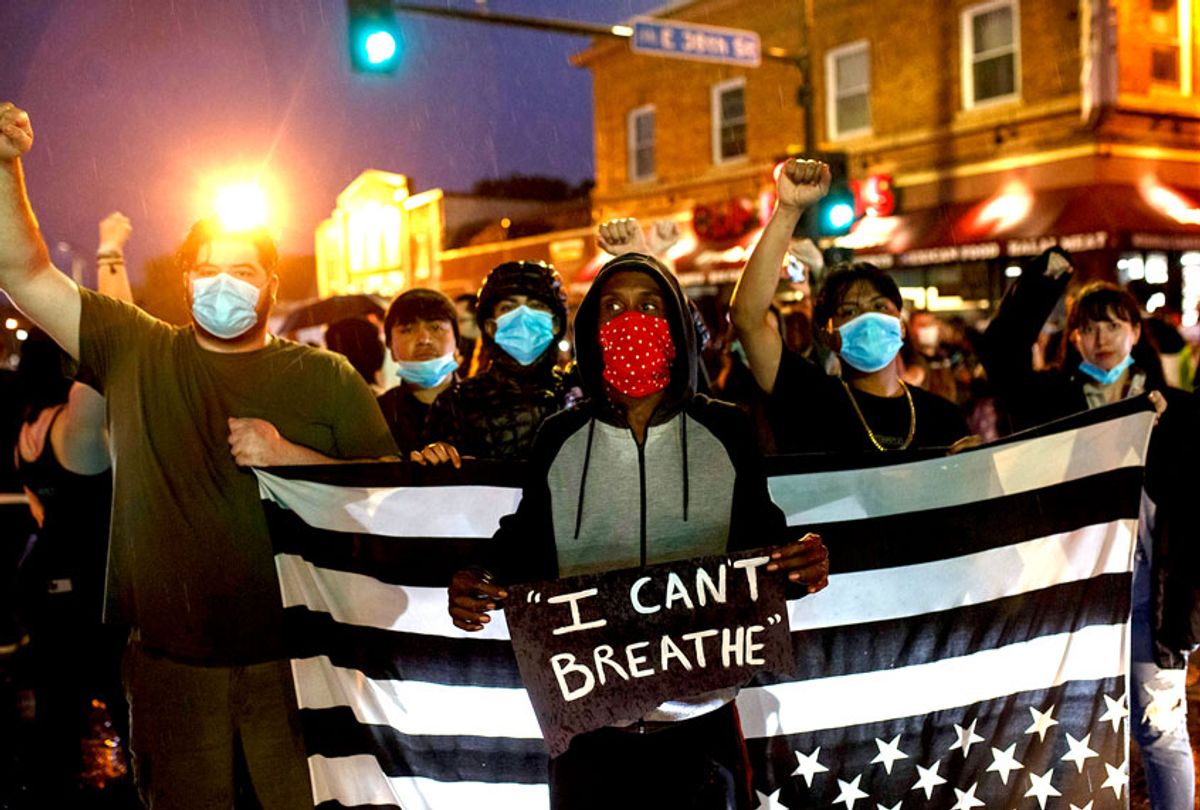 The uprising in Minneapolis sparked by the police killing of George Floyd was preceded by decades of growing racial inequality in a city considered an economic "miracle."

The video of former Minneapolis police officer Derek Chauvin kneeling on Floyd's neck for nearly nine minutes as he died in front of a crowd of witnesses prompted unprecedented civil unrest across the city and the nation. But "the situation facing our city stems from a long history of discrimination, prejudice and violence in the community," said Rep. Ilhan Omar, D-Minn, the first woman of color the state has elected to Congress.

"Minnesota has some of the worst disparities between blacks and whites in the entire country," Andrea Jenkins, the first openly transgender black woman elected to the Minneapolis City Council, told Minnesota Public Radio back in February, before the protests and the coronavirus pandemic upended life in the Twin Cities.

The levels of inequality in the Minneapolis-St. Paul metro area is staggering. The Twin Cities have a higher median household income than New York, Los Angeles or Chicago. But Minneapolis' black residents, who make up about 20% of the city's population, on average earn less than half as much as white families.

The average black family earned $36,000 in 2018 compared to nearly $83,000 for the average white family, according to census data. Only Milwaukee, the most segregated city in America, has a higher disparity. Minnesota as a whole has the second largest income inequality gap, behind only Washington, D.C.

As a result, Minneapolis also has the third-highest racial gap in homeownership in the country. About 76% of white families own a home, one of the highest ownership rates in the nation, compared to only about a quarter of black families.

The black unemployment rate in the Twin Cities is about twice as high as the rate for whites. The black poverty rate is higher than 25%, more than four times as high as the 5.9% poverty rate among whites. The startling economic disparities inevitably spill over into other aspects of life, like education and policing. The state of Minnesota ranks last in the nation in racial disparities in high school graduation rates. At the same time, black residents in the Twin Cities are incarcerated at 11 times the rate of whites.

A 2015 report from the American Civil Liberties Union found that black people in Minnesota were "8.7 times more likely than whites were to be arrested for low-level offenses like trespassing, playing music too loudly from a car (this is actually illegal), drinking in public, and disorderly conduct."

More than 60% of police shootings have involved black suspects since 2000, according to police data.

"One only has to look at the faces of the African Americans living in impoverished neighborhoods, attending failed schools, over represented in a broken criminal justice system, and suffering from covert and overt employment discrimination on a daily basis to see that not everyone is enjoying the prosperity of Minnesota," the state's chapter of the NAACP said in a December report. "If the growing disparities, in education, economics, criminal justice are not addressed immediately our children will not have a future."

Many of these inequalities are likely to be further exacerbated by the coronavirus pandemic, which has disproportionately affected the state's black community.

Despite the city's reputation as a liberal economic powerhouse, Democratic policies aimed at reducing inequities have been ineffective.

"Minneapolis has ridden this reputation of being progressive," Robert Lilligren, the first Native American elected to the City Council, told The New York Times. "That's the vibe: Do something superficial and feel like you did something big. Create a civil rights commission, create a civilian review board for the police, but don't give them the authority to change the policies and change the system."

The economic inequalities are the result of decades of racist policies and white violence. "This structural racism is baked into every community institution, into every neighborhood in the city," Kirsten Delegard, co-founder of the Mapping Prejudice Project at the University of Minnesota, told Salon.

Mapping Prejudice is a research group aimed at demonstrating that current inequities were "deliberately created through very specific policies." At the core of Minneapolis' racial inequalities is the practice of racial covenants, legal clauses inserted into property deeds reserving land exclusively for white people. The practice became commonplace in Minneapolis and other cities in the early 1900s.

"The early 20th century was a period of intense white supremacy and white violence," Delegard explained. "One of the conclusions that many people in power drew was that in order for a neighborhood to be stable and prosperous it had to be racially homogeneous. Having even one person who was not white in a neighborhood would immediately doom it to instability and violence and falling property values. By the 1930s in Minneapolis and across the country, racial covenants became standard practice for every property transaction. They were written into the code of ethics for realtors."

By the time the racial covenants had been used for 30 years, the city was "radically remade." It remains highly segregated today despite Supreme Court decisions around fair housing, a state law that banned racial covenants, and the federal Fair Housing Act.

"That legislation has been ineffective in terms of changing the patterns that were laid down by these racial covenants," Delegard said.

Once the segregation was entrenched, so was the housing inequality.

"Owning property is one of the main ways Americans accumulate wealth and the main way they pass on wealth to the next generation," Delegard said. "So by making it impossible for a whole group of people in the city to own property or to own property in a part of the city where property values actually go up, that really laid the groundwork for the racial wealth gap that we see, not just in Minneapolis, but around the country."

But the racial covenants are just the "base layer" of racial geography in Minneapolis.

"Once all African Americans are concentrated into just a couple of neighborhoods, other policies come into play, like redlining," which restricted federally-backed loans to black neighborhoods, and real estate steering, when realtors were banned from introducing people of a different race into white neighborhoods, Delegard explained.

Though there were some high-profile court cases challenging those racist practices, "most of the time these covenants and racial boundaries were enforced by white mob violence," she said. "If people dared to breach these boundaries they risked their lives."

By the late 1950s, few integrated neighborhoods remained after decades of racial housing practices. But there remained a few exceptions, including the neighborhood known as the Old Southside.

"It was one of the few parts of the city where black residents were able to own and rent their homes," public historian Denise Pike wrote in an essay for a collaborative history research project at the Heritage Studies and Public History program at the University of Minnesota. "The Old Southside black community was one of the few integrated areas that existed for communities of color in the city. Old Southside was a neighborhood that working- and middle-class black Minneapolitans called home. One resident of the area stated that the black middle class in the Old Southside 'owned their homes, had pretty houses, lawns and gardens.'"

But the construction of the I-35W corridor in South Minneapolis in 1959 upended life in the area. By the 1960s, federal highway construction demolished 37,000 housing units per year, Pike wrote. "The freeway routes disrupted 27% of Minneapolis' white population while inversely disrupting 82% of the black population."

"That's not an accident," Delegard told Salon. "It's an example of how it's layer upon layer, it's not just one thing. It's the covenants, followed by redlining, followed by real estate steering, followed by — once these neighborhoods are established and really cohesive and places of social solidarity, then you have the freeway running through where people don't have a choice whether they sell their properties or not. These communities are just blown apart by those freeways. People who accumulated some equity in those properties and those neighborhoods, that's all gone. It's the layered nature of all these practices.

"It's the legacy of all those things that we are seeing today in terms of Minneapolis having some of the biggest racial disparities in the country," she added.

The history of policing during this time is also key to understanding the situation that exists in the city today.

"In 1903, a group called the Citizen's Alliance was established by powerful white businessmen and they worked very closely with the Minneapolis Police Department, which was just beginning to expand," Molly Glasgow of MPD150, an activist group that seeks to dismantle the Minneapolis Police Department, told Salon. "So if we're looking at access to resources and wealth, business is certainly tied into that. And the ties that the police have had to the white business community from the beginning is playing out today in terms of what people have access to, which businesses are protected."

This is playing out in the police response to business break-ins around the protests over Floyd's death.

"We're even seeing that in our city right now, where black community members are showing up and protecting their own businesses because it has been made very apparent in the last few days that the police are not going to respond to emergency calls," Glasgow said.

The only way to undo decades of racist practices is massive wholesale reform, like defunding the police and redistributing wealth, she told Salon.

"We're going to have to bring [reparations] into the conversation. I know that makes people uncomfortable but it's absolutely necessary, especially when we're looking at the historical context," she said. "As we divest from the police, it's really important that we invest in the community-strengthening initiatives, which includes housing programs. As we're disconnecting schools from policing and therefore from prisons, we need to make sure we're investing in resources so that students have access to the food and the computers and the technology they need to continue to learn."

Wealth distribution is at the heart of what activists in Minneapolis are calling for.

"There's no way to shift policing, especially policing based in white supremacy, without shifting the capitalist system," Glasgow said. "I know those are two very large structural changes but because money is so tied we do need to start looking at housing and utilities and food and basic rights. And as we're dismantling the police, people are worried about crime, but if we're making sure that people's needs are met, there's going to be less and less crime because people are going to have what they need.

"We also need to separate access to money from systems of policing," she added, "So things around insurance and theft — that needs to become community-based funds and not funds where you need to have a police report," she added. "We're all paying into those systems, so if we pay into a community system instead of a corporate system then people are going to be able to access the money differently."

The solutions will require a "whole range of policies and efforts because now this structural racism" is so deeply embedded into every facet of life in Minneapolis, Delegard said. Policies should come from the people who have experienced the inequality firsthand, she concluded, rather than just "white people with titles."